Three meets on tap for this Saturday include the D1 championship in Terre Haute, Indiana, the D2 championship in Sacramento, California, and the D3 championship in Louisville, Kentucky. Note that in addition to the runners listed below, there may be others who were held out of their regional meet but are going to be at Nationals. Please let us know if there are NY alumni in the D1, D2 and D3 meets that are Nationals bound but not listed here. 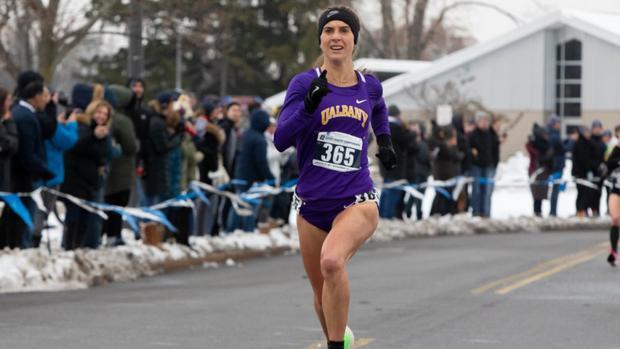 Nationals Contest: During the last three years since Syracuse won the title in 2015, Northern Arizona has dominated the D1 Men's championship and is again well ahead in the national rankings. The Lumberjacks just crushed the #2 and #3 ranked teams Colorado and BYU in the Mountain regional, so they seem to be a fair bet to get the four-peat. Two NY universities Iona and Syracuse were expected to take the AQs at the Northeast regional, but then unranked Harvard pulled a shocker by running away with the win. Nathan Lawler's 18th ranked Orange finished 2nd to advance to Terre Haute as the former Pittsford Mendon star placed 21st. Ryan Kutch grabbed an at-large spot with a 4th place finish for a Fordham team that was back in 14th.

At other regionals, Conor Lundy of Princeton earned an at-large berth by placing 6th for a Tiger squad that was a close 3rd at the Mid Atlantic but did not get selected. Shea Weilbaker's 29th-ranked Georgetown team had better luck with a 2nd place finish at Mid Atlantic as the former Toga star was 21st. Two other NY alumni from more far-flung regionals are repeat visitors to Nationals as Bryce Millar placed 23rd as his 16th-ranked Indiana team placed 4th in the Great Lakes regional and received a Nationals bid. John Rice's 27th-ranked Texas team won the South Regional, and the former Xavier star placed 2nd.

Nationals Contest:  At least 15 NY alumni will be moving on to the women's D1 Nationals, and there were six top-5 placements at regionals, two runner-up finishes, and two were winners. But no one has a better story than the victor of the Northeast Regional Hannah Reinhardt of the University of Albany, a veteran of the Clarence JV squads in high school who has flourished as a Great Dane. After top-25 finishes at the NE regional the last two years, Reinhardt stormed to victory and an at-large berth at Nationals in her senior year. Seven other NY alumni qualified from the NE, with Hannah Butler also earning an at-large spot with a 3rd for Brown. The rest of the qualifiers were all on teams heading for Terre Haute. Alexandra Hays in 9th and Emily Acker in 57th are members of the 28th-ranked Columbia squad that finished 4th at NE and got selected. Gabrielle Orie finished 14th for 30th-ranked Cornell which was 2nd at NE. Boston College is officially unranked as the 31st vote-getter, but the Eagles finished 3rd between Cornell and Columbia and earned an at-large selection with Lauren White in 17th, Sarah Flynn in 49th, and Paige Duca in 64th.

Five other regionals scattered across the country saw seven NY alumni advance to Nationals. Kathryn Munks was a repeater as she placed 2nd at the Mid Atlantic Regionals for 16th ranked and 1st place Penn State. Anna Kostarellis earned an at-large spot for Xavier in the Great Lakes Regional. At the Southeast Regional, Kelsey Chmiel and Julia Zachgo were 4th and 6th for the winning 6th-ranked North Carolina State Wolfpack. Out at the Mountain Regional, 10th-ranked Colorado finished 4th in a tough group, but the Buffaloes earned an at-large selection with Sage Hurta in 9th, and 7th-ranked New Mexico was 2nd with Alex Harris in 66th. Finally, in the West Regional, Jessica Lawson was 2nd for the 2nd-ranked Stanford team, so she will enter Nationals with likely one of the best shots at being on a National champion in 2019. Nationals Contest: NY alumni are relatively numerous at D2 Nationals this year as 25th-ranked Roberts Wesleyan won the East Regional with a mainly NY squad that finished 5th last year. Christopher Sims, Shane Pease, Connor Demo, James Betts, Nathan Cannon, and Justin Shaffer will be joined by a teammate from Michigan as the Redhawks head out to Sacramento. Edinboro's Jack Lacina will be out there with them as the unranked Fighting Scots will also be heading to a D2 Nationals that always is dominated by teams from out west.

Nationals Contest:  Both the Edinboro Fighting Scots and winners of the Atlantic Regional and Roberts Wesleyan Redhawks runners-up of the East Regional will be heading to Sacramento unranked in D2, but they will be bringing out nine NY alumni between them. 2013 NY Class D champ Hope Pietrocarlo will be leading the Edinboro team after a 2nd in the Atlantic Regional, and Ashley Watson and Brittany Shumway will be heading Roberts Wesleyan after 4th and 5th place finishes in the East Regional.

Nationals Contest:  Aidan Ryan finished 1st in the New England Regional for top-ranked Williams, so he is the top candidate for placing an NY alumni on a national champion team this year. No pressure on you about that, Aidan. The Ephs (pronounced "Eefs") were 8th at Nationals last year. Also doing very well in the New England Regional and moving on to Louisville was Theo Henderson of 25th-ranked Middlebury with a 4th-place finish and Bart Rust of 23rd-ranked Bates in 17th.

The Mideast Regional included two sets of NY guys running for highly ranked teams. Matt Karee was 5th and Hunter Hartshorne was 18th for the winning Carnegie Mellon team, which is ranked 4th. 6th-ranked Johns Hopkins was 2nd at the meet with Declan Hines in 10th and Patrick Dye in 21st. Down at the Southeast Regional, Matt Dillon booked another trip to Nationals with 19th-ranked Emory as he placed 25th.

That only leaves the Atlantic Regional to discuss, which includes 22 NYers representing five Nationals-bound teams plus two guys who did well enough to capture at-large berths. Sean McAneny in 2nd was the top NY guy for the winning and 7th-ranked SUNY Geneseo team, which finished 10th last year. McAneny had plenty of Blue Knight company at the top with Luke Holtzman in 3rd, Matthew Sayre in 4th, and Lucas Sutton in 6th. RPI finished 2nd and is 16th ranked with Danny Napora as the NY guy on the team in 29th. St. Lawrence was selected for Louisville and had Evan Page in 12th as the NY leader. 28th-ranked Ithaca was 4th also heads to Nationals with Forest Stewart as the top NY guy in 42nd. SUNY Oneonta is ranked 32nd and also claimed a Nationals ticket in 5th place with Ethan McDonald in 8th and Blake Dellabough in 11th on the lead. Sean Kuehn of Brockport State was 13th and Matt Whitworth of SUNY New Paltz was 16th to earn at-large selections.

Nationals Contest:  The NY D3 women's contingent for Nationals is exploding this year, as 34 runners are headed to Louisville. Freshman Eva Borton was an NY state champion last year, and she was the first Williams Eph over the line in 8th place for her 3rd-ranked team at the New England Regional. Others from that regional heading on include Kirsi Rajagopal for co-4th ranked MIT and Lauren Pollak for the 11th ranked Tufts Jumbos. Over in the Mideast Regional, Samantha Levy was 4th for the 2nd-ranked and winning Johns Hopkins squad, which now looks for a repeat battle with top ranked and reigning national champ Washington (MO) after taking 2nd last year. The Mideast's 2nd-place team and co-4th-ranked Dickinson includes Emma Johnston and Lilianna Matala, Olivia Visaggio of Misericordia and Kayla Muraski of DeSales earned at-large spots. Out in the Great Lakes Regional, 15th-ranked John Carroll got the win with the help of Jamie Amoroso's 25th place.

A huge number of NY runners always head to Nationals from the NY-school-flush Atlantic Regioanl, and six NY colleges will be heading to Louisville. SUNY Geneseo was again the winner as the 9th-ranked Blue Knights were led by Genny Corcoran in 2nd, Annibel Coolican in 7th, and Mariellen Penzer in 15th. 13th-ranked RPI was close behind and had Maggie Bond in 13th as its top NY runner. Next was 22nd-ranked Ithaca with Sarah Rudge leading the NY group in 9th. 27th-ranked Rochester was led by Jordan Hurlbut in 8th and Kelly Reese in 12th. 5th-place and 29th-ranked Vassar earned its first ever selection to Nationals with Lily Digman as its top NY runner. 32nd-ranked RIT aslo advanced out of the Atlantic with Hannah Weppner on the lead. One other national championship that took place three weeks ago at Westfield MA also needs to be mentioned since it always involves a lot of NY alumni. An added bonus is that an NY school often picks up a crown or two there.

The D3 division for the two-year junior colleges holds an early championship every year, usually in the Northeast where a lot of the schools are located. The Suffolk CC Sharks in 4th were the top NY-based school on the men's side and the team was led by Luis Antonio Fernandez, formerly of Middle Country HS, who placed 8th. Former Johnstown runner Sebastian Mills was the top NY guy in 4th for Fulton-Montgomery CC.

The NY contingent to the NJCAA D3 went crazy on the women's side as not only did the Suffolk CC Sharks win the championship, but Fashion Institute of Technology was 3rd and Hudson Valley CC was 5th. The top three places in the team scoring were earned by Sharks runners, as Alexandra Smith (Shoreham-Wading River) was 1st, Taylor McClay (Eastport-South Manor) was 6th, and Yasmeen Araujo (Deer Park) was 8th. Mckenzie Ryan (Shenendehowa) led Hudson Valley with an 11th place.