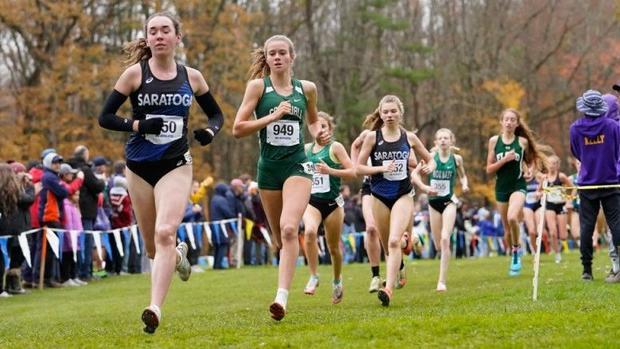 XC is coming back in full force in 2022. The schedules are filling up as the expanded slate of meets returns to something resembling 2019. Exuberant excitement and mindless enthusiasm are ready to reign supreme again.

In truth, it will take a lot of work and maybe another year or two to return NY XC back to the level of three years ago when Saratoga was the national champion and Fayetteville-Manlius was 7th. The Blue Streaks and Hornets could be even better in 2022 at all levels as their dominating programs roll onward, but the majority of NY's teams are still in recovery process from pandemic times. Three years ago there were 18 teams in our preseason previews that had a speed rating of 100 or better, and this year the number is 6.

The build-back is affected in at least two ways. For an old guard of runners who got going in XC before pandemic times and excelled in last year's return to the trails, the graduation cost was extreme as 25 of the top 55 runners paid their farewells. That number was only 11 for the start of the 2019 season. An even bigger factor is that the entry of young newcomers to the sport and its team camaraderie was absolutely crunched during the last two years. Teams just do not have a huge amount of depth, and the ranks of younger runners are thin.

But as the old XC saying goes in regards to this heap of lingering pandemic woes, "It's a hill, get over it."

Saratoga ruled in NY in 2021, winning the trifecta of States Class A, Federation, and NXR-New York races. There was no NXN national championship and the Blue Streaks did not attend the Running Lane championship down in Alabama won by Niwot CO. We'll never know who would have won the big battle between the nation's top two powerhouses, but at season's end Saratoga held a 143.2 - 141.4 speed rating edge over Niwot and also had an insanely close 1-5 compression of 8 along with good depth.

11-time national champion Fayetteville-Manlius had another strong year with a 2nd in both the States A and Feds races, while Bethlehem was blocked from Section-mate Saratoga from States but picked up a 3rd at Feds and a 2nd among the teams that attended NXR-NY. Northport and Cornwall also had impressive seasons among the big teams as they finished 3rd and 4th in the States A race and 4th and 5th at Feds.

Among the smaller schools, Bronxville had a return to glory as it picked up its lucky 13th state title and first in eight years with a Class C victory and then a 6th at Feds. East Aurora was 7th at Feds after winning its 10th state championship with a semi-repeat of its 2019 Class B win. South Lewis won its second Class D title in four years with a dominating win.

In the conferences outside of the NYSPHSAA, St. Anthony's repeated from last year as CHSAA champions, Brooklyn Tech was a runaway winner in the PSAL to repeat its 2019 win, Dalton won its first title in the NYSAIS, and Sacred Heart - Buffalo captured the MMAA All-Catholic championship.

In a year in which NY sent four runners from the Northeast's group of ten individuals to Eastbay Nationals, there were a lot of top performances for the NY girls. Cornwall junior and Feds champ Karrie Baloga was 5th at regionals and then moved it up to a 4th at Nationals for the Northeast winners. Willam Floyd freshman Zariel Macchia placed 2nd at NE and 12th at Nationals, while Rome Free Academy senior Emily Toth-Ratazzi was 7th and 29th and Ursuline senior Daphne Banino was 8th and 37th respectively.

Many other runners had exceptional seasons in the near return to normalcy last year, and the good news is that a lot of them will be back for 2022. States winners included FM freshman Izzie Sullivan in Class A, East Aurora freshman Emily O'Leary in B, Allegany-Limestone junior Angelina Napoleon in C, and South Lewis sophomore Brynn Bernard in D. Saratoga sophomore Emily Bush led a Blue Streak quintet at the top at NXN-NY that also included sophomore Alycia Hart, seniors Ella Kurto and Mackenzie Hart, junior Sheridan Wheeler, plus sophomore Anya Belisle in 7th, while slightly breaking up the Saratoga pack was another up-and-coming freshman, Pioneer's Lillie Bogdan in 6th. Among other top runners from last year who are returning are FM senior Hannah Kaercher, Cicero-North Syracuse senior Kate Putman, and Corning junior Sarah Lawson, while last year's top 20 senior group also included Yorktown' Sydney Leiter, South Jefferson's Alexa Doe, Camden's Elizabeth Lucason, and Irondequoit's Candace Tytler.

Again, this year will be one more step in the march back to the good old days of all-out XC. There will be a familiar look to the favorites for championships around the state this year, but a few key reclassifications of teams will affect some top races.

Among the same-old, same-old, Saratoga is expected to be not only the favorite for NY's major championships but also is rated well-ahead as the top team in the country in the return to NXN Nationals, as Niwot CO lost three of its top 5 from last year's squad. The Blue Streaks are the only 2021 States champion that are highly favored to win the same Class race again, but 2021 B winner East Aurora will begin the year as a small favorite down in Class C over reigning champ Bronxville. 2021 D winner South Lewis will again be in the scrum down there versus Voorheesville and Addison. Cornwall drops down to Class B and is maybe the favorite there ahead of better balanced squads from Pearl River and South Side.

One big new focus of interest will be the battle between a Fayetteville-Manlius team that has won all of the Section 3 Class A (or AA from 2005-2010) titles going back to primordial times (2005), but this year a loaded Cicero-North Syracuse team that last won a sectional title in 2004 could well be giving both the Hornets and Blue Streaks all they can handle. Meanwhile there will as always be a pack of strong teams including Bethlehem, Shenendehowa, Shaker, Ballston Spa, Colonie, and Niskayuna in the chase in S2-A behind Saratoga, which has won all of the championships in S2's biggest class during the 2000s with the exception of Shen's 2017 title.

In the non-NYSPHSAA conferences, status quo appears to be the norm as St. Anthony's in the CHSAA, Sacred Heart-Buffalo in the MMAA, and Dalton in the NYSAIS are all comfortable favorites for a repeat, while a Brooklyn Tech team that always has a strong development system is the most balanced of the top teams in the PSAL.

The battle for title of NY's top runner should be fierce this year. After her 4th last year at Nationals followed by her 3000m States title last June, Karrie Baloga has a prominent spot at the top of the list in her senior year. But sophomores Izzy Sullivan and Zariel Macchia could be seeing a big boost from their freshman years, Sullivan's Hornet teammate Hannah Kaercher still has some things to prove in her senior year. Emily Bush led the Toga party last year, but who knows on the team-oriented (Nats champ the goal) Blue Streak squad whether Alycia Hart, Sheridan Wheeler, or Anya Belisle might not take the helm at times during the season.

Finally, in a recovery year when developments could really be exploding, there are some runners who did not feature in the top ten for '21 XC who could be major news-breakers this year.

CNS senior Kate Putman had a solid campaign for awhile last year and topped things off with a win in the Saratoga Invite and then a 4th in the 800m and 2nd in the 1500m at States in June when she was less than 100%, but this fall could see her go to a new level. On top of that, two new faces from the track world will look to join her this fall, primed to make a big impact, both young and old.

And yes, Angelina Napoleon was a state top-20 runner last fall when she won the States C title and placed 7th at Feds. But after one of the most stupendous track seasons ever last spring when she smashed the national 2K steeplechase record at S6 state qualifiers before going on to win the state and national titles in that event while also earning a silver in the 800m at NBON and taking 13th in of all events the high jump -- what more marvels can we expect this year from the AL-Gator virtuoso?

Cheers to another season that will truly be like no other.