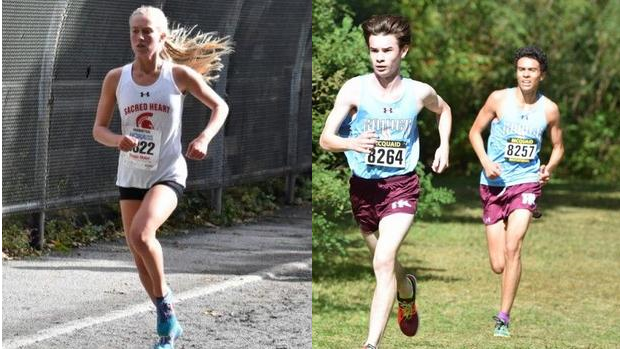 The CHSAA league for the NYC area Catholic teams are holding their championship at Van Cortlandt Park on Saturday afternoon with six races centered around the big Varsity Race showdowns for the boys and girls. Although the boys race will likely be reprising the same clash of Xavier and St. Anthony's that has been featured the last four years though this time with Archbishop Molloy and Monsignor Farrell also in there trying to be the spoilers, the girls are offering up the ultimate seat-gripper of a four-way contest that is too close for anyone to feel at all comfortable about and that involves a lot of mysterious numbers.

First though, a bow to the CHSAA teams that ran in the Monsignor Martin championship out in Buffalo area last Saturday. The boys' race was decided through the big efforts of all seven guys on the St. Joseph Collegiate team who finished ahead of the Canisius 5th guy to push the Marauders to the win by a 43-44 score. Cardinal O'Hara's Tom Appenheimer closed out his stellar career by winning his third straight individual title. The Nardin Academy girls also won their third straight title with a 38-66 win over Sacred Heart. Buffalo Seminary's Zoe Knauss won the individual title in her senior year after finishing 2nd in 2017.

Back east, as expected earlier, the Xaiver guys and Notre Dame girls were winners in the NY-BQ CHSAA championships and Archbishop Molloy's James Loeffel and Notre Dame's Sierra Dinneen were the individual champs at VCP. Out at Long Island's Sunken Meadow course for the NSCHSAA contest, the outcome also went as expected as St. Anthony's won the boys' side with their frontrunner Matthew Payamps on the lead and Sacred Heart took the girls' side with their ace Maggie Maier claiming the title. But the big surprise there was that Sacred Heart needed a 6th spot tie-breaker to get the win over Kellenberg after a 41-41 deadlock. The surprise was not that the girls' battle was such a nail-biter or that St. John the Baptist was only 5 points in back of the top duo. As the preview for the girls delves into, it's that the projection numbers just don't seem to add up as we try to forecast a finish for the girls' race on Saturday. But fortunately, that means we'll just have to sit back and let the runners decide this matter on their own.

As always, please note that neither the speed-ratings-based listings of teams nor the 5K time virtual meet scores are meant to be exact predictions of how a race will turn out since there are many unknown factors at work here. The virtual meets based on 5K times are never a very good summary for any XC event, and teams from the CHSAA like Xavier who run mainly 4Ks at VCP or 3 mile races will not find a huge amount to go by. We are not seriously projecting that Archbishop Molly, Iona Prep, and St. John the Baptist will finish 1-2-3 with St. Anthony's in 4th and Xavier in 13th for the boys as the the 5K virtual calculates. But use the links to the 5K scorecard if you wish to get some minimal information (like names of the runners) about the teams.