It was a great day for cross country today in upstate New York.Â  Local meet Vernon-Verona-Sherill Invitational had received an excess of entries this year due to being named the 2011 NYSPHSAA Championship course.Â  Almost doubling in scale, there were 14 separate races going off, 7 on the boys' side and 7 on the girls', with an average of 18 teams per race.Â  And if there was any one consensus of the day, it was that this course was more than fitting to host states.Â  Speaking with VVS head coach and meet director Todd Bauer before the meet, it was obvious of his pride in the course.

"I just took a lap around the course and everything looks beautiful," Bauer said.Â  "We've had very little water damage to the course, and it is quite dry out there.Â  I think the course looks perfect today."

Noticing the meet schedule, it was hard to miss some notable match-ups that would no doubt be a preview of the ones we can expect during championship season.

"I organized the brackets by team preference, school size, made them competitive, and also a little bit of randomness too," Bauer mentoned.Â  "I put myself in a harder bracket because I want good competition. I need my girls to be pushed here. Also, I donâ€™t want other coaches saying â€˜hey, the home meet coach put himself in the easiest race so he could win.'"

Each race ran as its own individual meet, complete with team and individual results.Â  Below are the highlights as MileSplit saw them on location

Girls: The girls side started off with simply one of the most impressive showings of the day.Â  Local team Fayetteville-Manlius finished 18 girls in the top 20, perfecting a perfect score in both Varsity and JV races.Â  Jillian Fanning's time of 18:05 is second in the state only to Mary Cain's 17:50 last week in Randolph.Â  We spoke with legendary FM coach Bill Aris for his thoughts on the performance.

"I believe this is a good start and nothing more," Aris said.Â  "This is really only the beginning of the season. It is definitely a good starting point for so early in the season. Jillian is a great girl, but weâ€™re a very team-oriented style team and we always have a â€œteam-firstâ€ mentality.Â  You can see that today, that we will accept anyone and push them to succeed.Â  I had one idea coming into todayâ€™s race, and that was to have a good start of the season. I think we did that the way we ran today." 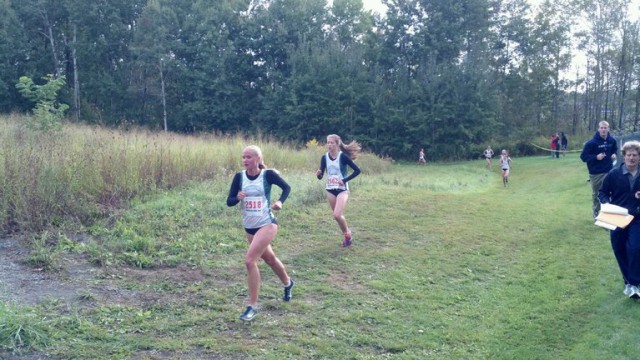 Boys: FM boys had a very good meet as well.Â  Not quite as dominant in their victory, Nick Ryan got out quick and maintained a healthy lead throughout the race.Â  It was a race to the finish for 2nd place, with Kris Moran of Long Island's North Babylon holding off FM 2nd man Matt Deyo.Â  Ithaca also impressed with a second place overall finish, mainly due to their pack running approach. 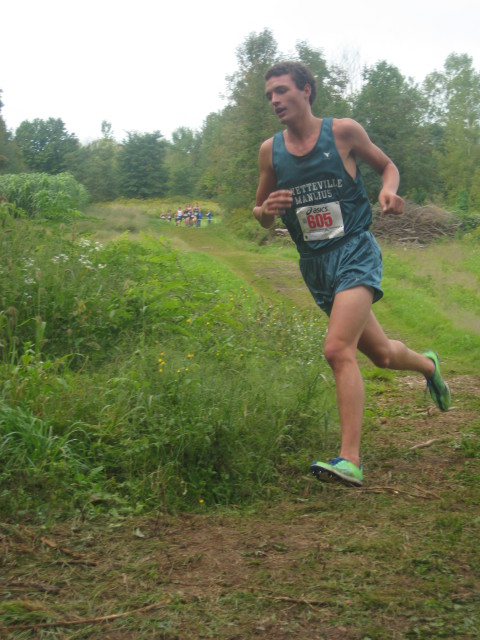 Girls:Â  Going into the race, spectators knew they had a strong field to watch.Â  Three teams, West Genesee/Warwick Valley/North Shore, all had impressive fields entered.Â  We spoke with West Genesee Girls Head Coach Jim Vermeulen about how he thought the race would play out.

"We're very aware of who we are running against," Vermeulen said. "Unfortunately I lost my #2 runner for a week, but she should be okay after that. Iâ€™m really looking for other girls to step up here today. Even without my #2, we still have a pretty good top 5, and with her back in a week or so, we'll have an even better group up top." 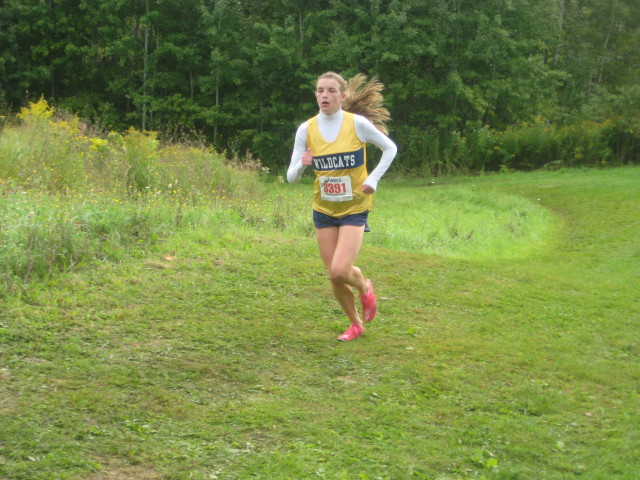 We also spoke with North Shore Head Coach Neal Levy about his objectives for today.

"We haven't raced yet, this will be a good determiner to see where our girls are at physically," Levy said.Â  "The rain pretty much flooded Long Island, which hasn't affected their training much, but its nice to see them out here ready to run." 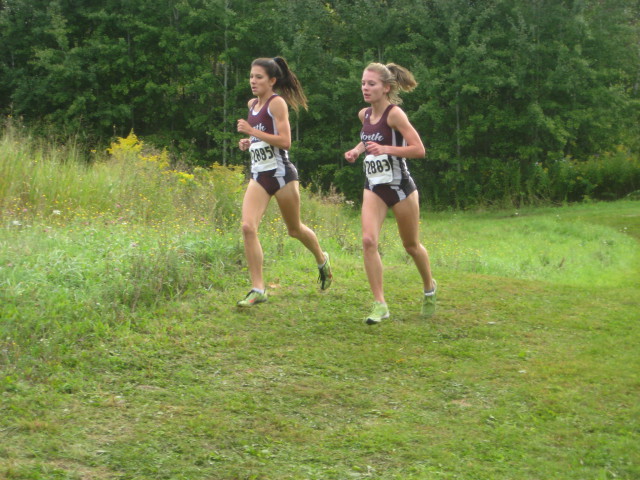 In the end, both teams had an impressive race.Â  Laura Leff of West Genesee finished first with the second fastest time of the day, 18:09.Â  But it was North Shore's sheer numbers that gave them the edge, finishing 2-5.Â  Warwick Valley also had an impressive showing, nabbing 2nd overall.

Boys: The race was highlighted by a close race between Section 1's Pearl River and Long Island team Walt Whitman.Â  In the end, it was Pearl River's 5th man that was the deciding factor.Â  We spoke to Pearl River Head Boys Coach Mike Kiernan on the importance of finding that 5th man.

"We are actually still trying to figure out our 5th man spot right now," Kiernan said.Â  "Today we had Ben (McDermott) run as the 5th man. Heâ€™s a freshman, but he did run a 4:53 mile in the spring last year, but weâ€™ll see how the season goes." 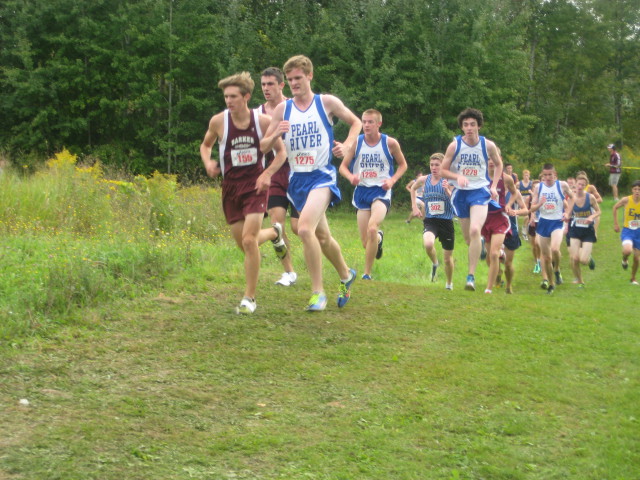 We also spoke with East Syracuse Minoa Head Coach Jim Gorney on senior Mike Coogan's progress this year after a bad tick bite at the beginning of the summer.Â  Mike had won his race in this meet the previous year.

"It has sort of been a blessing in disguise," Gormey said. "We usually find that Mike overtrains in the summer.Â  Now that he is starting a few weeks back, we feel he will peak right when he needs to, at the State Championships."

Mike went on to take 5th overall in the race. 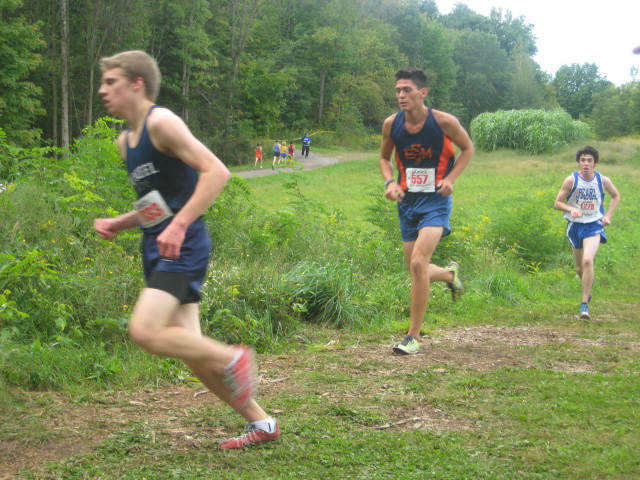 Girls: Canandaigua had an impressive showing, as it overtook Long Island's Sachem East.Â  After the race, we spoke with Canadaigua Head Coach Matt Ward about the performance.

"Definitely a feeling out process today.Â  I was unsure about us since we are missing out on our 5th, but the girls did a good job," Ward said.Â  "Today was more of a 'go out individually and see where your strong points are' kind of race. I really loved the course though, a lot of changing terrain. The kids said that even if they were struggling at one part, the terrain would change quickly, making the course seem quicker. Weâ€™re still expecting a lot of fine tuning since itâ€™s still very early, but weâ€™re already seeing a lot of healthy rivalries within the team, and thatâ€™s what I like to see.Â  It makes them push each other harder in practice" 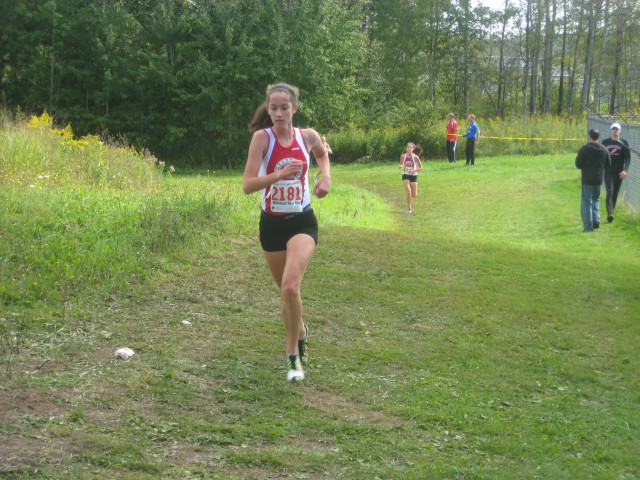 Boys: In one of the closest races of the day, it was Cicero-North Syracuse led by Anthony Lupia that overtook Liverpool 51 to 53. 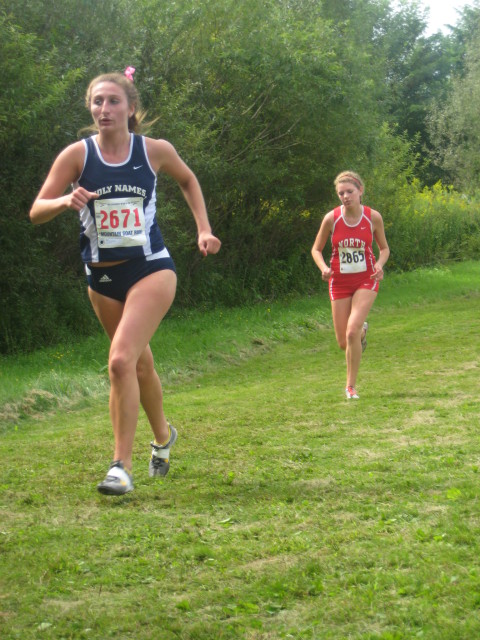 Boys: In one of the best Class B matchups in the state, it was Ryan Manahan of Marcellus edging out Brewster's Justin Maguire.Â  Ryan took off with an affirmitive lead that Justin couldn't seem to close in on.Â  Splitting the pair was Class A Baldwinsville's Alec Peinkofer. 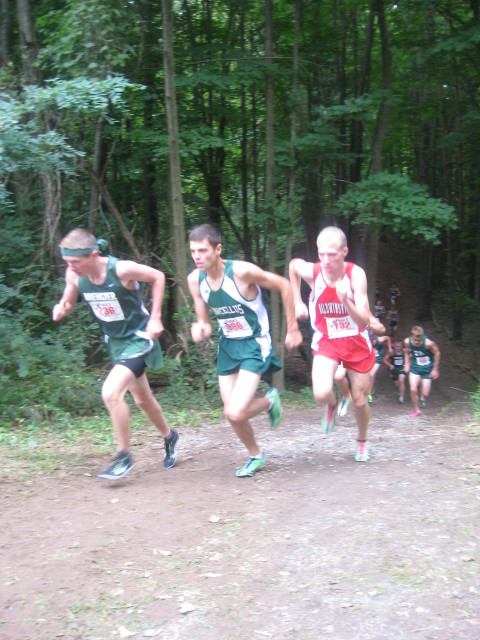 Girls: Gionna Frontera of Newburgh wins the race in 18:32.

Boys: Dan Lennon of Peru wins the race with fastest time of the day for all boys, 16:07.Â  Coach Bauer of host school VVS said: "At states, anyone looking to break 16:00 is going to really have to work for it.Â  Dan came close, and we are looking for big things once these athletes have a full season under their belt." 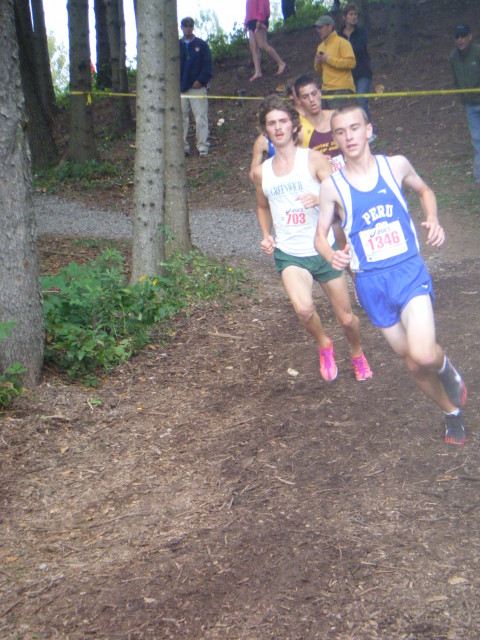 Girls: Lizzie Predmore leads Shenendehowa to victory with a time of 19:01 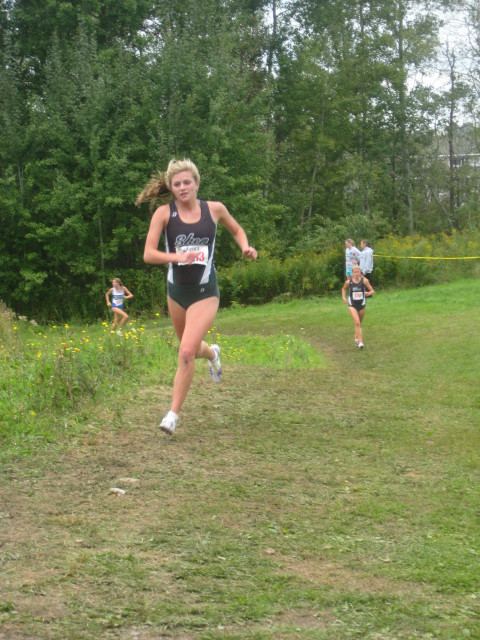 Boys: Going into the meet, this was one of the most exciting races.Â  US No. 4 Shaker was going to debut its team for 2011.Â  Knowing Arlington of Section 2, they would at least make the race competitive.Â  Speaking with the Shaker head boys coach Ed Springstead before the race, he informed us of some notable absences.

"Unfortunately, we are without two of our top 5 men right now, Delago and Hausamann are currently injured," Springstead said.Â  "(Christian) Delago has an inflammation in his leg due to a natural condition, and Hausamann is on crutches as a precaution due to a twisted ankle. They should both be back Monday, but weâ€™ll see. I donâ€™t want to rush into things. We have good kids to back them up in the meantime though, so hopefully they can step up a little.Â  But Delago's times speak for themself, and they will be missed."

Shaker put up a great fight in Delago's absence, with senior Mike Libruk winning in a commanding 16:10.Â  But it was Arlington's numbers that eventually caught Shaker, finishing 5 in the top 10.Â  After the race, we spoke with Arlington Head Coach Steve Arnett about what some considered to be an upset.

"We wanted to make a statement," Arnett said. "I think we did that.Â  I just feel that I donâ€™t want to be overlooked. Iâ€™m hoping that our guys can continue working hard and that we can make some noise here. Hopefully put ourselves on the map, and be competitive this year. Itâ€™s early, but today, I am very proud of my guys.Â  They have worked very hard this summer, and they've earned this." 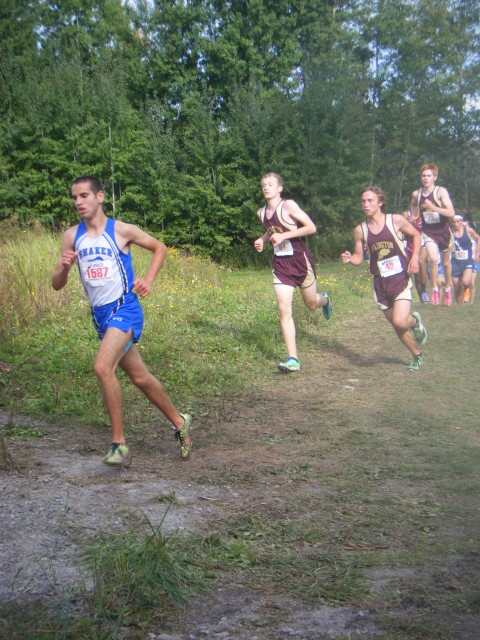 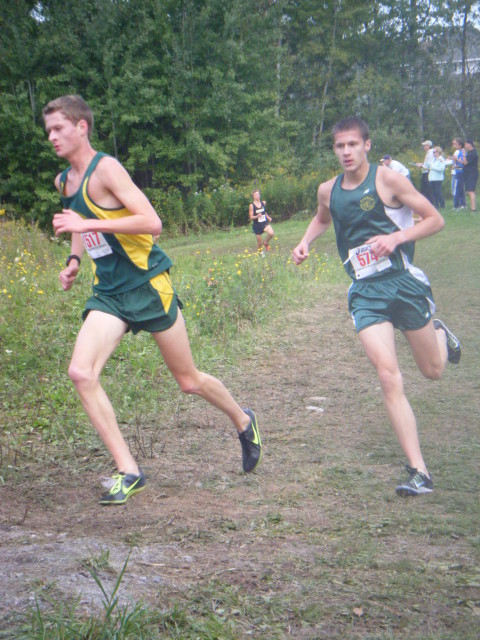