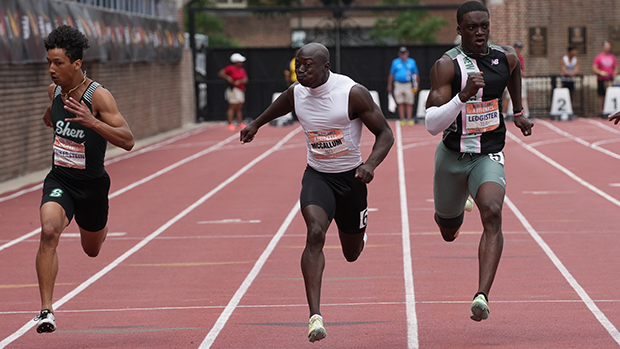 PHILADELPHIA, Penn. -- Conditions have cooled here at Franklin Field, but the performances haven't.

It's another day of loaded action, and MileSplit is on the scene to call all the action. Check back throughout the day to find all of our coverage of the meet. You can find past content in the links below. Boys 4x800m: This one was a tight race throughout, as West Springfield of Virginia was on a mission from the gun. Leading at the first exchange, and at the second, and only just off the lead by the third, the 1:54.30 anchor leg by John O'Donnell sealed the deal with a winning time of 7:45.37. Interview Girls 4x800m: Union Catholic had redemption on its mind after coming up just short indoors. The girls from Jersey pushed out a blistering pace and dared the field to come with them. Opening in 2:13, they controlled the pace, maintaining the lead through the first and second legs. Charlotte Country Day came up on UC at the third exchange, but it was Peyton Hollis who course corrected quickly, dropping a 2:08.57 anchor to finish the race off. The team's winning time of 8:54.67 is one of Jersey's best ever. Interview Boys TX SMR: Drama unfolded in the final heat, as a blanket finish left the decision down to the thousandths. But as the time appeared, it was the penultimate heat that grabbed the victory, with Stow Falls of Ohio posting their first national title in 1:32.38. Interview

Girls TX SMR: The girls of Miami Southridge (FL) brought home the hardware, putting together excellent legs in the 1-1-2-4 Relay. They controlled the race from the outset, establishing a lead through the 1-1 exchange. Once the race reached their anchor, it was over, as Alyssa Jones brought them home in 1:44.94. Interview Girls Hammer: Liangie Calderon took home the title on her second throw of the prelims, then simply tried to fend off the competition. The weight was flying in the finals, and she going for broke, but it would be that second throw that would assure victory in a best of just over 160 feet. Interview Boys 100m: After a false start, the race was off and a tight pack came across the line. It took 10 minutes to sort out the finishing photo, but national leader T'Mars McCallum of Carolina Forest (SC) defended his seed. His mark of 10.17 was wind-aided -- and quite a bit too -- but the way he handled the loaded field bodes well for the sprinters future. Interview Girls 100m: A blanket finish was broken down by the thousandths of a second, with the decision going to the outside lane. Spring Grove's (PA) Laila Campbell was running in her home state -- and she'll be keeping the 100m title within PA's borders. She won in 11.553, just over Briana Selby of Virginia, who went 11.559. Interview

Boys 400m: It was a windy day for the 400m boys championship final, but Oakland Mills (MD) senior Judson Lincoln finally got his due. While h e performed pacer duties for Cade Flatt in the 800m last night, he came back on Saturday and raced the conditions to win in 47.26. It wasn't the time he was looking for, but -- as he'll learn -- the title trophy shines just as bright. Interview Girls 400m: Zaya Adkins, the Missouri standout, controlled the race from the gun, running an aggressive opening 200m. Then she continued her surge down the homestretch, dipping under 53 seconds for the first time, in a new state record winning time of 52.88. Interview Boys Mile Racewalk: Isaac Gray of Upstate New York won the event, with a final surge in the concluding steps.

Girls Mile Racewalk: New York indoor state champion Desilets Dubois won, and it was her first dip back into the event after spending much of the spring season running open events. Interview Boys Steeple: Devan Kipyego has had a whirlwind week: After running four minutes flat in the mile on Wednesday at Brooks PR, and then flying to Philly for New Balance Nationals Outdoor, he cruised toward the anchor leg of the DMR on Friday night, then came back with a winning effort in the steeple on Saturday morning. Not the best technician in the event, he did have the speed in between the barrier to compensate, out-leaning the New York state champion at the line in 5:48.15. Interview

Girls Steeple: National record holder Angelina Napoleon was the class of the field, but tired legs from the 800m the night before and slightly windy conditions prevented another repeat of historic heights. Still, she ran 6:30.51 to win the event outright, still two seconds faster than anyone else has run this season. Interview