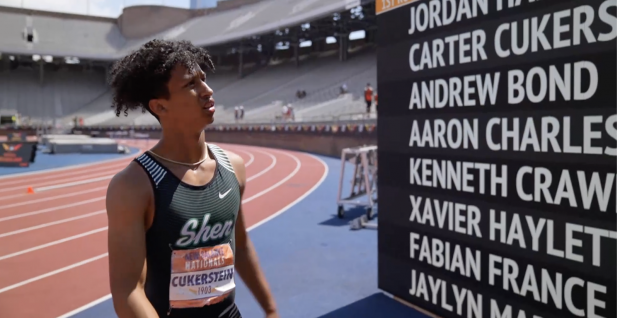 PHILADELPHIA, Penn. -- It's Day 2 of the New Balance Nationals Outdoor, and things are heating up -- pun intended.

While temperatures have been over 90 degrees, the times have been equally blazing. Check out our rolling updates throughout the day. Boys 800m: Oh so close. While the race was provided a pace-setter (Oakland Mills' Judson Lincoln), it was still a full high school field. Cade Flatt was looking for record pace, but he had company by another athlete through 400m. Still the No. 2 all-time performer didn't waver, as he came through in 51.15 seconds, and then dropped the challenge with one lap to go.  Windy conditions aside, the Ole Miss commit came storming down the homestretch and crossed the line just off of the coveted national record time of 1:46.45. He now owns a PB of 1:46.48, 0.03 seconds off the record. He'll follow up this performance with his confirmed entrance into the Team USA Championships later this summer. Interview.

Girls 800m: It was a cross-country affair for Isabel Conde de Frankenberg, put out a strong new personal best in the mile at Brooks PR on Wednesday, then flew to Philly to win the 800m on Friday. Another PR, Conde outlasted the national record holder in the steeple, Angelina Napoleon, running 2:05.61. Interview. Boys Distance Medley: The race was over by the time CJ Singleton got the baton with a healthy lead. The fastest anchor in the field was ready to perform if needed, but his teammates gave him a buffer that extended to an 8-second margin of victory. The quartet dropped below 10 minutes and captured the Pennsylvania state record in the process in 9:56.84.  Interview.

Girls Distance Medley: Purple Track Club continued their pursuit of the distance relay trifecta, pulling away from the field with a winning time of 11:42.78, with anchor leg Sarah Forsyth splitting 4:48 for 1,600m.

Girls 4x200m: Bullis continued its weekend with a stellar effort of 1:34.68 to win by nearly a second. Interview. Boys 2 Mile: Christ School's (NC) Rocky Hansen had the extra gear in the concluding laps of the 2-mile and went on to win his first national title. A big personal best, Hansen dropped his Canadian competition with 200m to go, claiming victory in 8:46.97 for the full distance. Interview.

Girls 2 Mile: The Franklin Field track has treated Angelina Perez well in the past, and that was no different on Friday, as she cruised away to the win in the 2-mile, 24 hours before she sets off to do it all again at the New Jersey Meet of Champions. Perez split just under five minutes through the first mile and had company for much of the race. At 2,000 meters, though, the competition began to wane and the race was all Perez. She finished in 10:03.18.  Interview. Girls Triple Jump: The stars from the New York State Championships were trading attempts over 42-feet. But just as Tamiah Washington was closing in on the leader, Alex Kelly capped off the competition with a monster effort of 43-00.25 to take home the gold.

Boys Triple Jump: Greg Foster had the competition locked up by a margin of an inch, but it wouldn't stop an all-out effort to improve his winning margin a whole foot, taking home national title in a U.S. No. 4 mark of 50-0.75.

Girls Swedish: The girls of South Dade Express out of Florida dominated the competition, winning with a margin of four seconds in the short sprint medley. The team's winning time of 2:13.02 is the top in the country.

Boys Swedish: Riverdale Baptist of Maryland captured the title on the boys side. They outran the field by over a second, winning in 1:55.25. Boys Champ Sprint Medley: The boys of West Springfield, Virginia held off a fast-closing Union Catholic, as they outlasted the 4xMile champs in a winning time of 3:23.08.

Girls Champ Sprint Medley: The aptly named Motor City TC of MI motored away with the standard formation of the Sprint Medley, running to a new US #4 in the event. Anchored by Kylee King, the perennial relay powers won the event by 7 seconds.

Boys 100m Prelims: Shenendehowa (NY) graduate Carter Cukerstein (above) leads the field with a wind-legal 10.42. All the top seeds make their way through, and with many in the field well below 10.20 in the event, things are only heating up.

Girls 100m Prelims: Unlike the boys, some of the girls decided to put up some quicker times, while other favorites preferred to cruise on through. Top seeded Brianna Selby of Virginia put together the fastest qualifier as well, crossing the line in 11.44, while 11.24 girl Laila Campbell of Spring Grove (PA) came through in 11.53.

Boys 400H: Not bad for a first time effort this season. Yougendy Mauricette, a fast-rising junior from Georgetown Sussex Technical (DE), didn't let his low seed (the slowest of the three section final) dictate his race plan. The third-year athlete blasted from the gun, and put away the field with a 51.31, good for US No. 1 in the event.

Girls 400mH: It took a US No. 3 clocking to take home the title, and coming around the final bend, the race was all Myla Greene of Bullis School (MD). She controlled the field from the gun, Zuriel Reed pushing through the early stages. Tragedy averted at the 200m bend, as an athlete in the outside lane veered in front of Green, but the junior from Maryland stayed calm, and continued on to the win in 58.27.

Boys Discus - UCLA-bound Michael Pinckney solidified his win in the discus with his final throw, the only one of the competition to surpass 200-ft. His mark is good for NY #2 All-Time, and 8th in the Country this year.

Girls Pole Vault - Freshman standout Veronica Vacca made quick work of the pit she won Penn Relays on. She cleared 13-4.5 to win the competition.