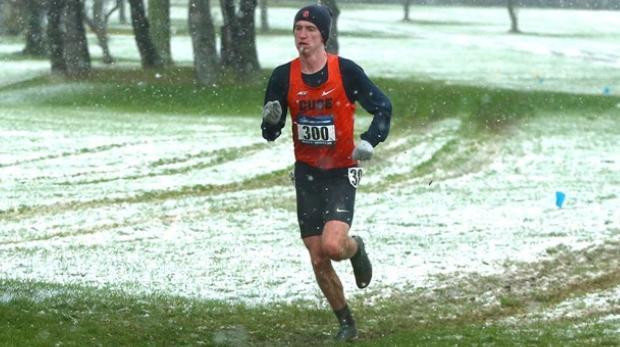 Two meets on tap for this Saturday include the D1 championship in Madison, Wisconsin and the D3 championship in Oshkosh, Wisconsin. Note that in addition to the runners listed below, there may be others who were held out of their regional meet but are going to be at Nationals. Please let us know if there are NY alumni in the D1 and D3 meets that are not listed here.

Nationals Contest: Syracuse won the national title in 2015 and finished 3rd in 2016, but then tumbled back a ways to 13th last year, though the Orange's Justyn Knight was the individual champ. Syracuse enters the Nationals meet at Madison, Wisconsin as the 11th ranked team this time, while reigning champ Northern Arizona is again the favorite over #2 BYU and the host #3 Wisconsin. Syracuse top finisher  junior Aidan Tooker repeated his 6th place finish from last year in the Northeast regional and will be looking to move up on his 109th place of last year. Noah Affolder placed 12th in the ACC championship though he did not run at regionals when Syracuse edged Iona for 1st. Conor Lundy's 23rd ranked Princeton team will be trying to improve on last year's 28th place at Nationals after winning the Mid Atlantic Regional. The #2 Tiger once again took 4th in the regional and he was 62nd last year at Nationals. Bryce Millar's Indiana team placed 5th in the Great Lakes regional to get an at-large bid, and the 4th spot junior Hoosier was 30th. Lead Longhorn junior John Rice placed 6th in the South Central regional for 2nd place Texas, and he is again heading back to Nationals to move up well beyond last year's 213th place.

Nationals Contest:  At the top New Mexico is the defending champ and top ranked team this year.We'll start out west, where resides the top ranked team that an NY alumni runs for. Jessica Lawson's 7th ranked Stanford team finished 3rd in the West regional behind Oregon and Boise State. Lawson was the third Cardinal in, and she will be looking to better her 186th mark at Nationals last year. I'm not sure what the prospects are for Washington Husky junior Kaitlin Neal who was having a great year after placing 78th in 2016 as a freshman, but she has not raced at the last two meets. Closer to home in the Mid Atlantic regional, Villanova freshman Reilly Siebert's 8th ranked Hoyas took 1st with Siebert in 24th. Six places ahead of her was Penn State junior Katie Munks whose 3rd-place Lions earned an at-large bid. Although only the top two teams qualified for Nationals from the Northeast regional, both teams have a pair of NY alumni. 8th ranked  Columbia took 1st with sophomores Maria Kogan in 9th and Alexandra Hays in 13th. 17th ranked Dartmouth finished 2nd with junior Julia Stevenson taking 16th and sophomore Ella Ketchum in 42nd. Ketchum was 180th and Stevenson 211th last year at Nationals. Finally, an eighth qualifier for NY came from the Midwest regional where Amanda Vestri was the third runner in for 13th ranked Iowa State as she finished 12th. Last year Vestri finished 160th at Nationals. There might also be a possibility for Colorado's Sage Hurta who was among the top Buffaloes earlier in the year.

Nationals Contest:  This year the top ranked D3 team with an NY runner is #3 RPI, which sits behind reigning champ North Central and Washington University (MO). Sean O'Connor finished 4th for the 1st-place Engineers at the Atlantic regional while his teammate Grant O'Connor (no relation except as a fellow Engineer, from CT) won the race. Second at the Atlantic was the usual NY standard bearer SUNY Geneseo, and the 9th-ranked Blue Knights' Sean McAneny was 2nd, while Brad Farnham and and Jackson Tate were 8th and 12th on a squad that naturally sends 7 NY guys to Nationals. The Atlantic's 3rd place team RIT had Evan Feigel finishing 21st, and 4th place SUNY Oneonta like Geneseo is sending a 7-pack of NY runners to Nationals led by 10th-place finisher Ethan McDonald and 19th-place Chris Hannan. Hunter Phinney of Rochester and Nick Vielhauer of St. Lawrence were Atlantic at-large qualifier from NY with 6th and 13th place finishes. The New England regional is sending six teams to Nationals including Amherst, Williams, Middlebury, MIT, Tufts, and Bates. That last spot is important for NY's tally as Bates includes 27th-place finisher Bart Rust. Aidan Ryan was the second guy in for 11th-ranked Williams with a 6th place, and Theo Henderson finished 21st for 16th-ranked Middlebury. The Mideast regional is also sending three NY guys to Nationals as Carnegie-Mellon, Haverford, and Johns Hopkins head onward. Matt Karee finished 32nd for 6th-ranked and Scott Pourshalchi was 30th for 12-th ranked Johns Hopkins, while Dickinson's Eric Herrmann's 9th place was good for an at-large invite. A 24th NY D3 Nationals finalist is coming out of the South-Southeast regional as Matt Dillon joins his 2nd-place and 28th ranked Emory team for D3 Nationals out at Wisconsin-Oshkosh.

Nationals Contest:  The NY D3 women's contingent is one less than the guy's, but the men had two squads stocked with a septet from NY while the women got just one. SUNY Geneseo again is the standard bearer for the NY masses after the 3rd-ranked Blue Knights won the Atlantic regional and senior lead runner Elise Ramirez moved up one place from 2017 to capture individual honors. Genny Corcoran, Dana Cebulski, Allie Fernandez, and Taylor Rettig all placed in the top 13 for Geneseo, which had a minuscule score of 28. Atlantic 2nd-place and 14th-ranked RPI has 25th-placing Maggie Bond on the squad, while 3rd-place and 17th-ranked St.Lawrence includes the NY trio of Leah Livernois, Sarah Moon, and Cassidy Scott. Rochester was 5th at the Atlantic, which was good enough for an at-large selection, and a trio of NY Yellowjackets is led by Rachel Bargabos who took 4th. Six of the seven at-large individual tickets from the Atlantic were filled by high-placing NY women as 7th-place Abby Sullivan of Clarkson, 10th-place Emily Cavanagh of New Paltz, 17th-place Allison Miller of Brockport State, 18th-place Veronica Kordrupel of Buffalo State, 19th-place Krista Kicsak of Brockport, and 20th-place Kaitlin Stinson of Utica all got selections. The other three NY D3 Nationals finalists of the 23 tally were from the New England regional, which is sending six teams to Wisconsin-Oshkosh including 4th ranked MIT with Emily Niu placing 77th and 5th-ranked Middlebury with senior Claire Gomba in 36th. Julia O'Rourke of Bowdoin earned an at-large spot with a 15th place. Top ranked Johns Hopkins won last year's meet, while MIT was 4th and SUNY Geneseo was 6th.