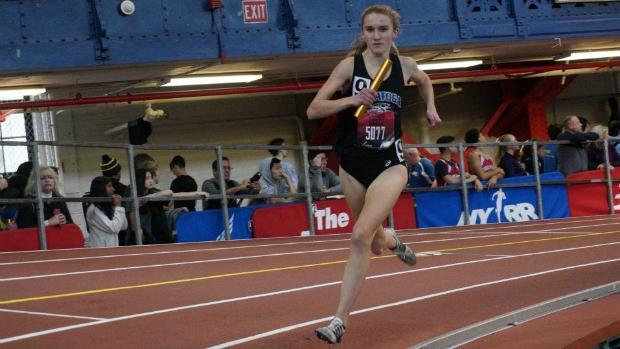 Girls 4x200m - Paul Robeson is back in the 4x200m, hopefully with a healed injury to Shawnakay Peart, who pulled up in the PSAL Final.  If she is back at 100%, Robeson will be in the mix to break 1:40, and head to finals.  NY State Champs William Floyd are also here, as well as Christopher Columbus, who made the race very close at Ocean Breezes.

Girls 4x400m - State Champs Medgar Evers will be doing their best to keep up with the best in the country, but will need to dip well below 3:50 to be in contention for a medal.

Girls 4x800m - The Top 9 teams from the NY State Meet are entered here, six of which whom have run under 9:20.  State Champs Fayetteville-Manlius aren't entered, but can be swapped out with Notre Dame Academy, who didn't run at States, but were the previous State Leaders at 9:15.25 from the Dr. Sander Invite.  Niskayuna ran 9:14.73 to improve upon NDA's mark at Millrose, and then reiterated the time at the State Meet.

Girls SMR - This race has quite a few interesting entries, chief among them is North Rockland.  With Katelyn Tuohy on anchor, and a State Champion 4x400m relay to load up the front, they could be dangerous.  But strong anchors for Kellenberg, Notre Dame Academy, and Ward Melville could make this race a lot closer than many might think.

Girls DMR - This race should be a barn-burner to kick off the meet.  North Rockland and Saratoga headline the race, with two of the best anchors in the country.  Saratoga took down North Rockland last spring at Loucks, and we're sure that's still on everyone's mind.  Notre Dame Academy and Benjamin Cardozo have both run around 12:10 much earlier in the season, and can dip well under.  And then there is Ursuline, who is very capable of going well under 12mins, as well as Niskayuna.  This could have six or more NY Teams under that magic 12minunte barrier.