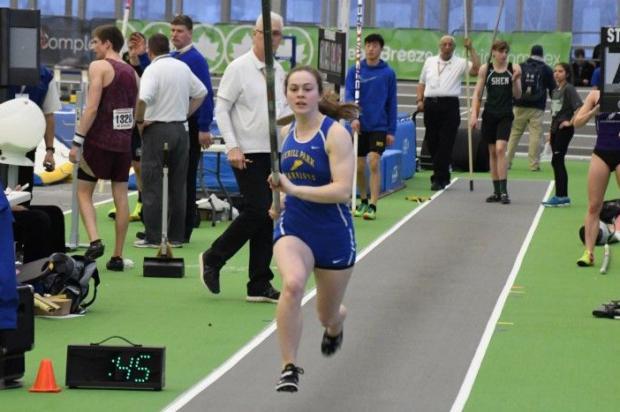 Girls Long Jump - It will be Lanae-Tava Thomas's (Rush-Henrietta) last attempt to get that Indoor National Record of 21-11, set last year.  She's already gone 21-8, and is the National Leader by seven inches, and comes in as the favorite.

Girls Triple Jump - Without the State Champ entered, Christina Wende (Kenmore West) become the top seed for New York at 38-11.25.  Also at that same mark is Codi-Ann Reid (Medgar Evers), who we didn't get to see at States, but hit that mark at the PSAL Champs.

Girls High Jump - State Champ Emilee Hanlon (Dunkirk) is entered here, as well as Sharde Johnson (Emma Willard), who took second based on misses.  My' Khiyah Williams (Benjamin Banneker) is also entered, and all three athletes are over 5-7 this year.

Girls Pole Vault - State Champ Alana Carroll (Averill Park) is here with a real shot at winning.  Her 13-6 is US #3, and with the Top Vaulter in the Country Seed Erica Ellis not entered, Carroll is the second seed overall.  Kaeli Thompson (Warwick) has cleared 13-feet before, and will be in medal contention as well, currently US #10.

Girls Shot Put - It's been a low year for the Shot Put in New York, but with a smaller field this year, State Champ Rachel Donner (Iroquois) could pull in a medal here.

Girls Weight Throw - Both Monique Hardy (Webster Thomas) and Natalia Surdej (Lancaster) get one last chance to improve their own Class State Records, and both could be in medal territory as well.  Hardy is not too far from the Sophomore National Record, either.