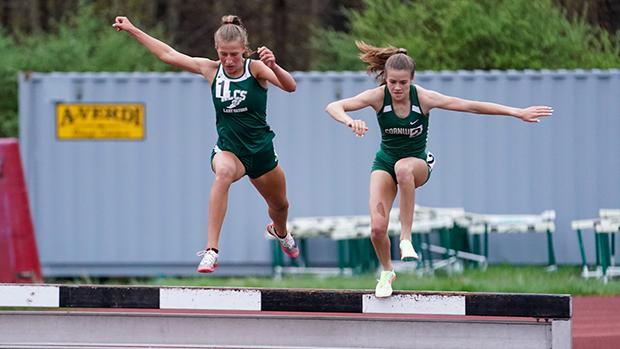 Two of the nation's best steeplechase athletes met up for a thrilling preview of a matchup that will follow the pair throughout the outdoor season.

Last week, Angelina Napoleon (Allegany-Limestone) put out a  No. 7 all-time performance of 6:39.71 up in her home section, signaling big things to come down the road. The race was a pivot point for the season, as she was now one of the favorites for the New York state Division I title. That moniker would eventually put her on a collision course with Karrie Baloga (Cornwall), who held the eighth grade state record in the event, a performance which earned her a third place finish at states in 2019, the last year the meet was held.

The matchup came earlier than expected.

Napoleon headed to Baloga's home track, for a dedicate steeple-only meet, and the race was off. Even through the barriers, both had direct competition for the first time this season, pushing each other at every barrier. Down the line they came, with Napoleon edging out Baloga in the final meters. Napoleon would push her best to 6:31.49, a significant drop at this level. Baloga, in second, had a similar drop. She had held her 6:43.19 PR since eighth grade, without improvement since, much of that being attributed to the COVID pandemic preventing big opportunities. Baloga chopped off a full 10-seconds to finish in 6:32.82.

Those marks shoot Napoleon and Baloga to No. 3 and No. 4 all-time in the event in New York State history. Add in the rest of the country, and they only move down to U.S. No. 5 and U.S. No. 6 all-time. The junior state and national record is held by Sarah Trainor (FDR) at 6:29.08, tantalizingly close for both athletes. That was also the overall high school national record before Sydney Masciarelli (Marianapolis Prep, CT) dropped it down to 6:25.35 at the New York State Showcase in 2021.

The race served as an early preview. The pair have two matchups, at least, to go this season. Both are currently entered in the Loucks Games, with the weather and temperature predicted to be perfection.

Then, come June, the state meet returns for the first time since 2019, to be held at Cicero-North Syracuse. The record books are just waiting to be rewritten.