Two weeks out from unanticipated McQuaid third place finish, the Burnt Hills boys reaffirmed why they came into the season so highly rated to begin with.  At their home invite, they crushed the merge with 45points, and a 60-second compression.  The team averaged 15:17.69 for the course, two seconds better than their best SPAC average from the year before, the 15:19.15 run at the Suburban Council Champs last year.

Tyler Berg come through with a big effort up front.  He ran to an exciting 14:47.57, moving him up to #5 All-Time at SPAC.  Only 12 other boys have broken 15mins at SPAC, and Berg's mark now sees him ten seconds in front of last years' best, 15:57 by Shea Weilbaker (Saratoga).  For team implications, none may be more important than the return of Aidan Gillooley, who had a hamstring cramp during the McQuaid Invite. Coach Chip Button told the local paper that the cramp had affected his race at McQuaid, but he would be back to normal soon.  That was evident at a local dual meet this week against Saratoga and others, where Gillooley beat both his teammates, and the rest of the field to win the race.  This weekend, he put that fitness back into good use, taking second in the merge, and bettering his own #15 All-Time SPAC mark from last year with a 15:01.27. 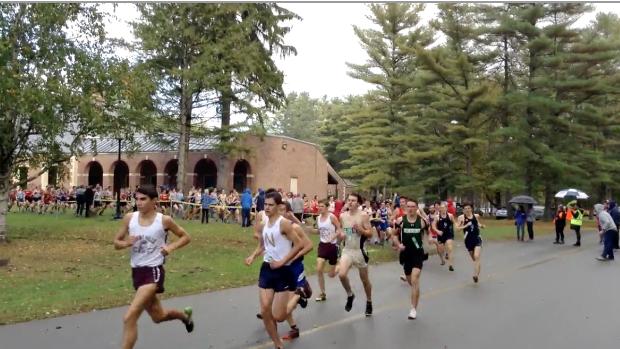 The back end of Burnt Hills top 5 is coming into form as well.  The achilles heel over the past two years has been their compression, but as Berg has gotten better, so has the back end.  It was 1:30 at McQuaid, now it's down to a minute.  Both Nick Hunziker and David Metacarpa had Season Best Speed Ratings, now the entire scoring five over 170.

It would seem the only athlete with an off-day was Evan Brennan, who would cross the line with a 181 Speed Rating.  Even that makes him one of the best third man in the country, but we've seen him hover around 187 at Baldwinsville, and 188 at McQuaid.  With him at his best, Burnt Hills has the best Top 3 in the country, without question.  However, at that point, just like American Fork showed in 2016, it's all about how far up your back two can get.  With AF's 4th at 175, and 5th at 160, they were able to take second at NXN.  Not a bad precedent to look at for a team that is already ahead of those marks.