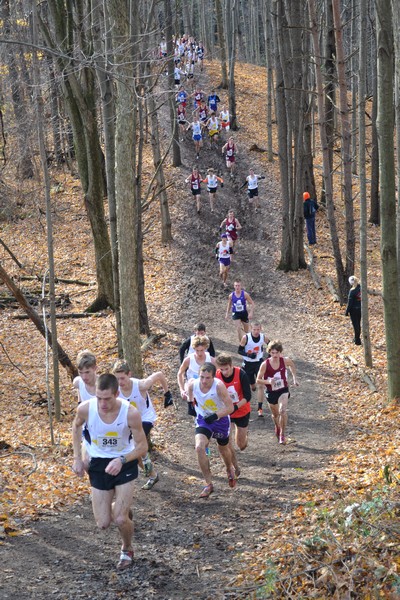 Verona NY - Meet conditions were far from what they were previously in the season at the VVS Invitational.  Snow had fallen early in the afternoon the night before, thoroughly drenching the course in a layer of mud reminiscent of NXN in Oregon.  On the other hand, the weather improved over the course of the day, steadily rising from a brisk morning chill to a early afternoon heat.  The course did not fare as well, as repeated pounding from the numerous races created a mudfest that slowed times down considerably.  However, while fast times may have been stifled, great competition was not, as a total of 3 races came down to within a three point margin.  MileSplit NY was on the scene to call the races. 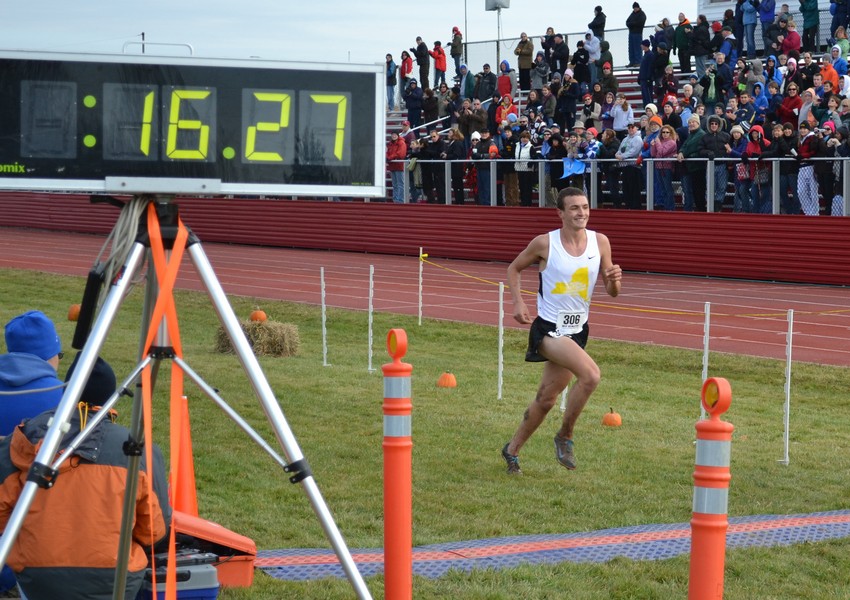 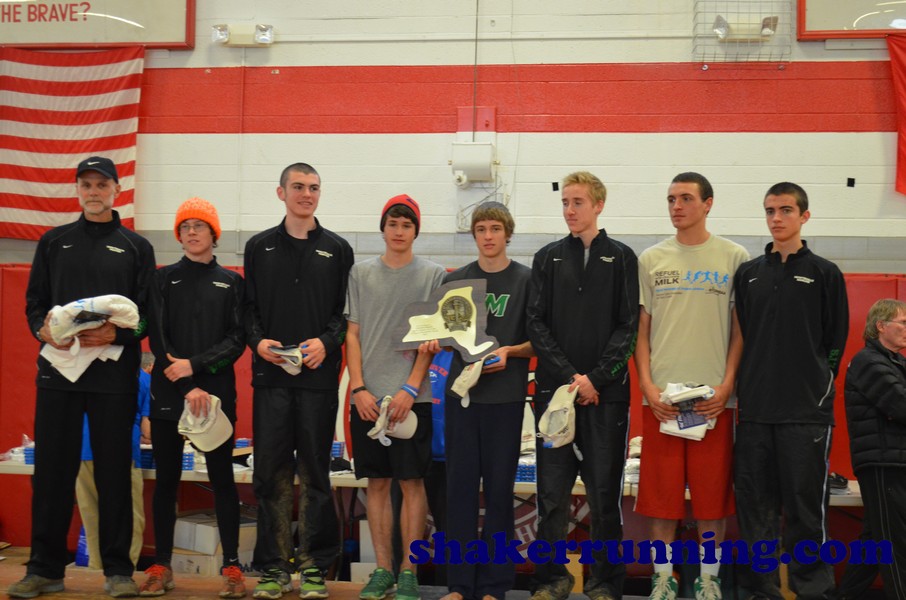 Breakdown:  The day started off with a bang, as Nick Ryan blasted out of the starting line to an early lead.  Nick's lead would grow, as he wound up with the fastest time of the day by nearly 30 seconds, in 16:28.  While Ryan was indeed impressive, his fellow teammates dropped back further than usual.  The race consisted of several NYS titans such as Shaker, Arlington, and Rush Henrietta Sperry.  It would be Rush-Henrietta who challenge FM for the crown, as they capitalized on a fading FM 5th man.  The reigning champs looked like they were in trouble as they crossed the line, but when the results were tallied up, FM came out on top with a margin of 1 point to Rush-Henrietta, 63 to 64 respectively.  the battle for 3rd was no easy task either, coming down to a three point advantage of rehabilitated Shaker over rivals Arlington, 81 to 84. 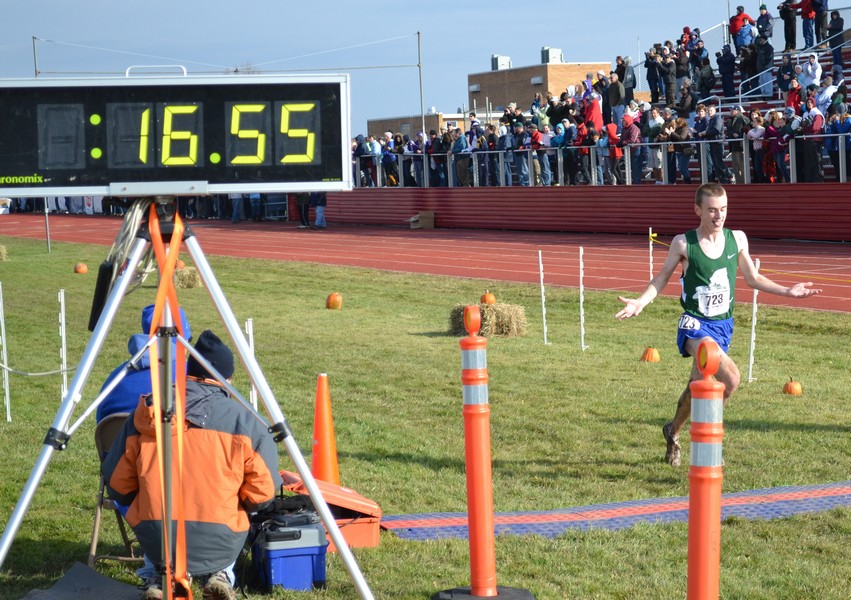 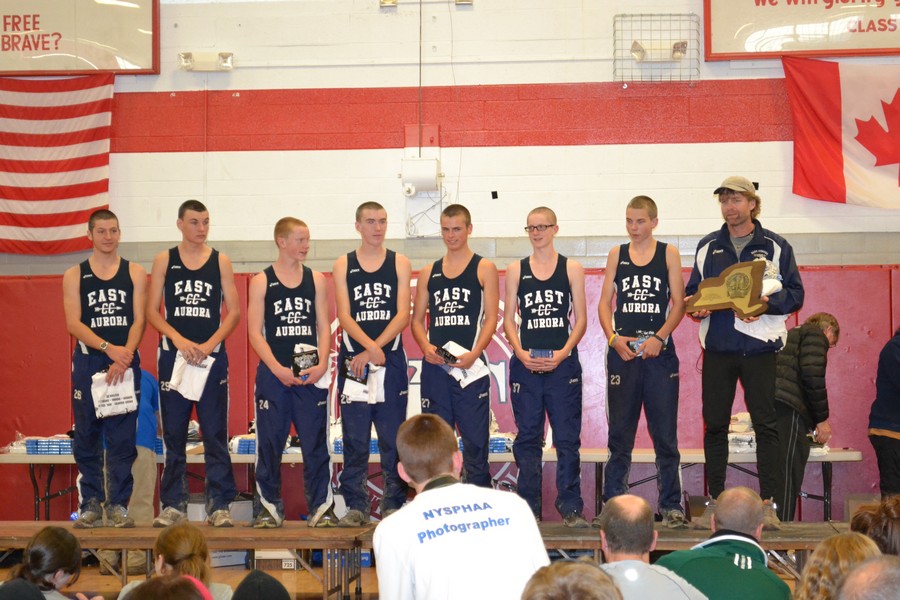 Breakdown:  This race goes to show the difference a individual can make.  One of Pearl River's top 5, Brian Edsall, couldn't race today due to injuries, opening up the race for East Aurora's taking.  East Aurora would capitalize on the situation by putting three runners in the top 10 to give them a nice cushion over Honeoye Falls-Lima.  The race was taken out quickly by Justin Maguire of Brewster, but was unable to hold the pace, allowing a quartet of runners behind him the chance at gold.  Dan Lennon's impressive kick, which we have witnessed before earlier in the season, led him to victory over a strong Ryan Manahan of Marcellus.  We spoke with Dan after the race to see how this pack running mentality affected him:

"I am so excited with my win today," Lennon said.  "Today was more of a tactical race for me, I definitely let Maguire set the pace as held back for one of the first times this season.  As soon as I saw him start to fade, I knew it was my time to start moving  I didn't realize how bad the mud was going to be until I started racing.  I almost fell twice out on the course today., the tighter turns are more difficult right now.  After my race today, I think I am going to skip Federations and keep training to qualify at the Foot Locker Regionals, I want to try and make it in the top 10, it should be my seasons' peak." 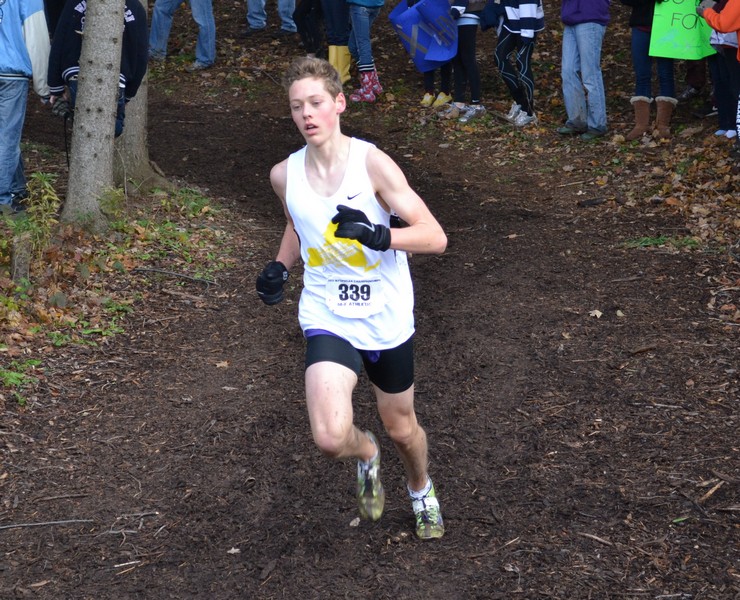 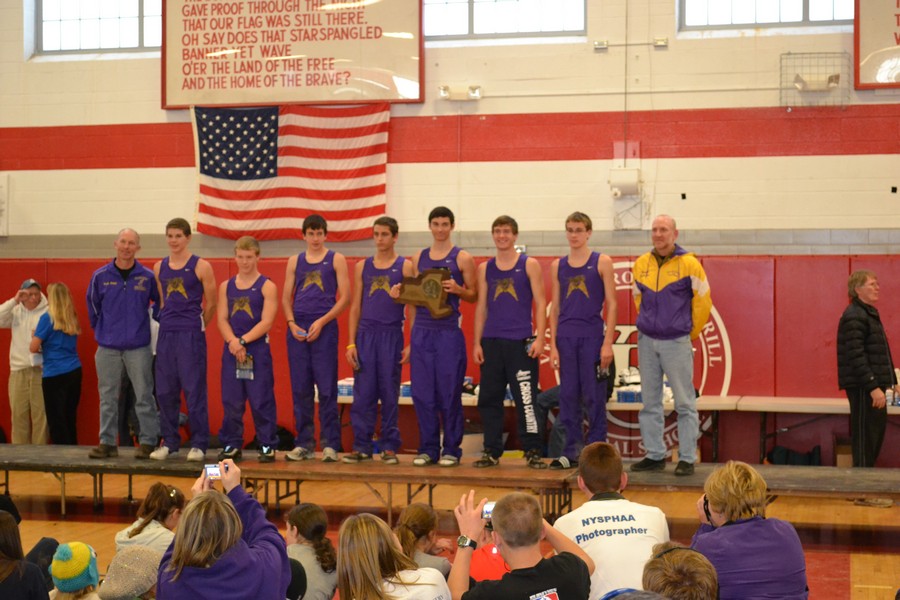 Breakdown: Predicted to be the closest race of the day, Boys Class C lived up to expectations, as the top three teams scored within a 5 point range.  A strong Fonda-Fultonville trails the trio with a score of 79 points, putting up a good performance with their junior, Matt Hoffman.  Coming in second, Section 1's Pawling scores a clear 76 points highlighted by Matt Jorgensen's 17:57.7 .  And with a score of 74 are the winners from Holland Patent out of Section 3.  Running away with the race at about the 2-mile mark, CBA's Brendan Smith takes the title of Individual Champ, a goal he has been looking for all season:

"I feel really good right now," Smith said.  "It was definitely a challenging course though.  Like I said, I have run it before and it's never been this muddy.  I knew coming in yesterday that the snow would slow everyone down, I knew there would be slower times.  The pack running out there in front was something I had to get used to.  I wasn't really used to it last year, it wasn't really my technique.  This year, we started out early trying to learn some of that stuff.  At about the 1.5-mile mark, I started to push a little bit.  It was a little earlier than me and my coach agreed on, but I felt good and started to roll.  The pack definitely carried me in the beginning however, it brought me along nicely and set the pace up.  From here, I plan on doing well at Feds.  After that, I'm a little undecided on whether I will be going to NXN or Foot Locker for an individual bid.  Things are a little unsure right now because I am under the weather, so we'll see how things play out at Feds." 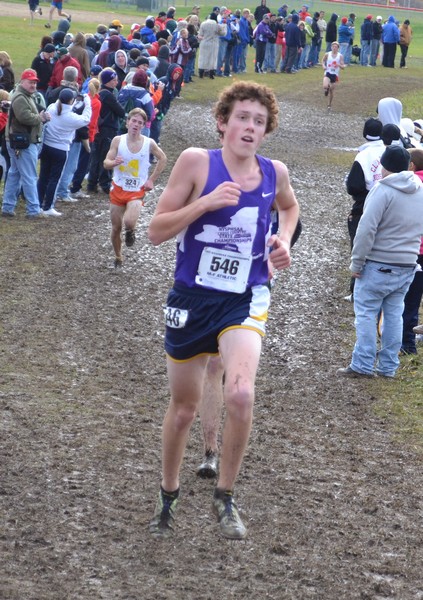 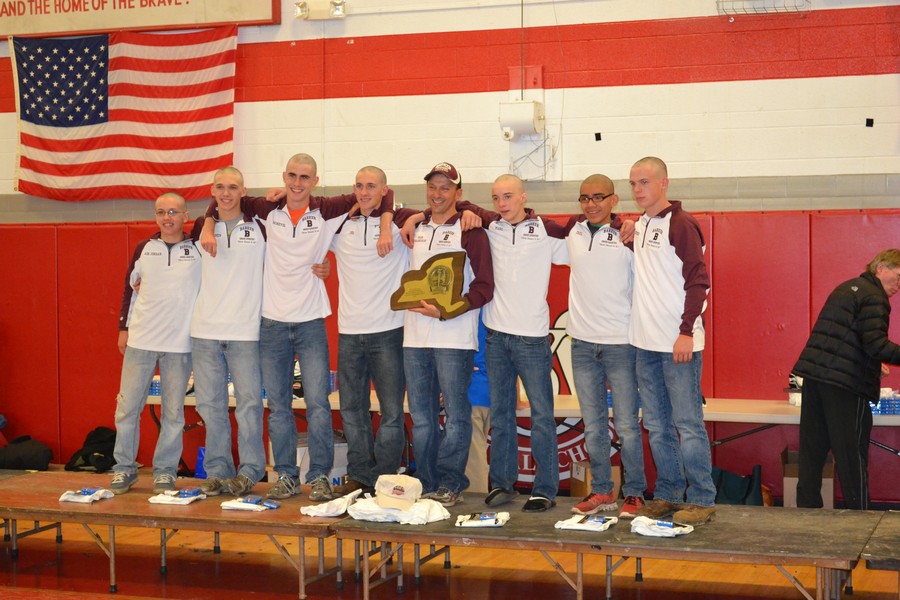 Breakdown:  It was the battle of the B's in Class D Boys, as Barker secured it's win over Berne-Knox-Westerlo and Beaver River.  Barker's strong pack couldn't be stopped, as they piled in 4 in the top 20.  Individual winner Jeffrey Antolos battled to line against Alex Campanella of Eldred.  It was Antolos' kick in the last 50 meters that secured his win:

"As we came to line, I just really wanted to win, I couldn't lose now," Antolos said.  "This is my first time on the course, so the mud kind of surprised me.  The hills weren't that bad, mud-wise, but the turns really tripped me up.  It was nice to have someone with me the whole time, I love having footsteps chasing me the race, it speeds me up.  I think this year, I'm going to be taking the rest of the season off.  Maybe next year I could look into NXN or Foot Locker." 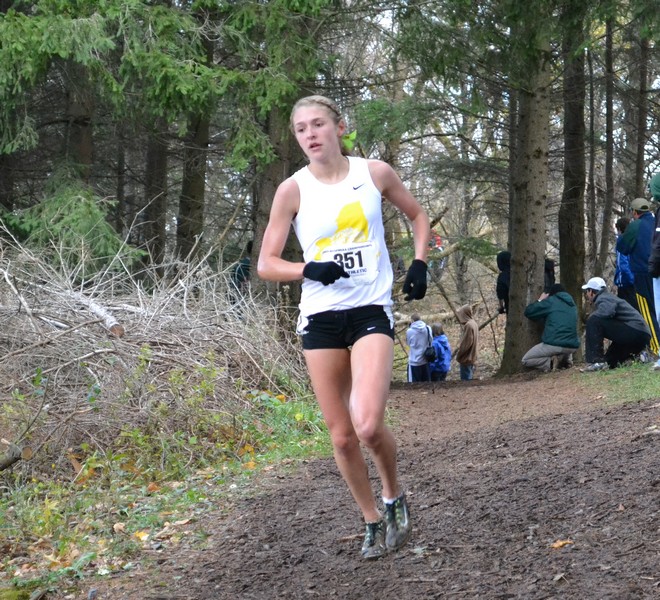 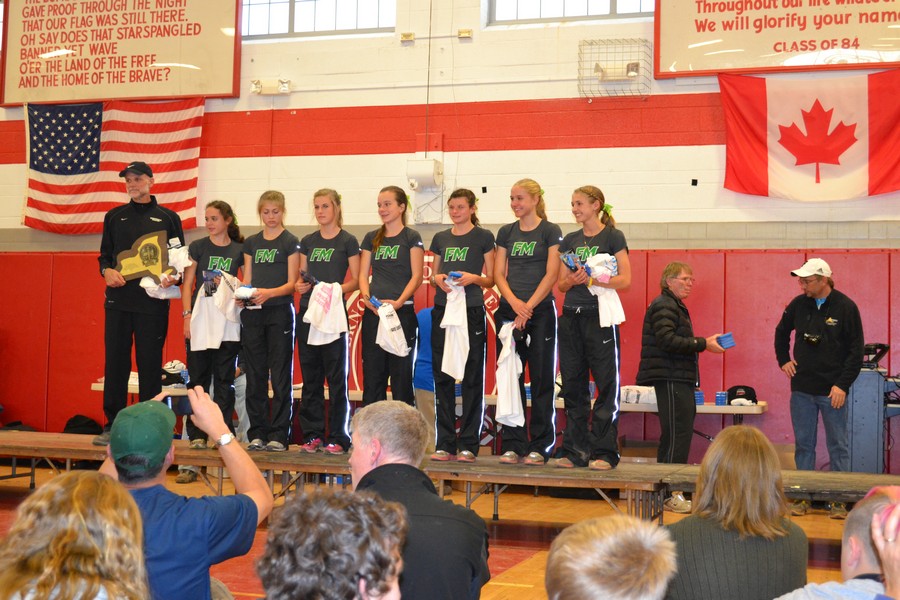 Breakdown:  US #1 performs another clean sweep at the States Championship by scoring a perfect 15.  Fanning, with the fastest female time of the day by over 30 seconds, took out in stride, aptly finding all the dry land on a course that had been turned to a watery mudpit by all the races run before her.  Second place individually belonged to Laura Leff of West Genesee, who achieved her season goal of placing in the top 5 overall by placing 4th with a 19:33.  Not to be forgotten, second place in the team competition was US #2 Saratoga Springs.  A force in their own right, they would be just as dominant if not for the strong FM team ahead of them.  3rd place finds US #45 Canandaigua winning over Ward Melville in a six place tie-breaker. 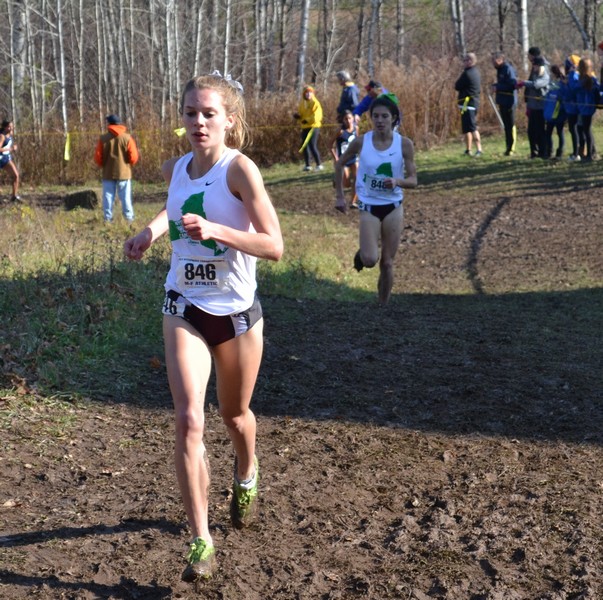 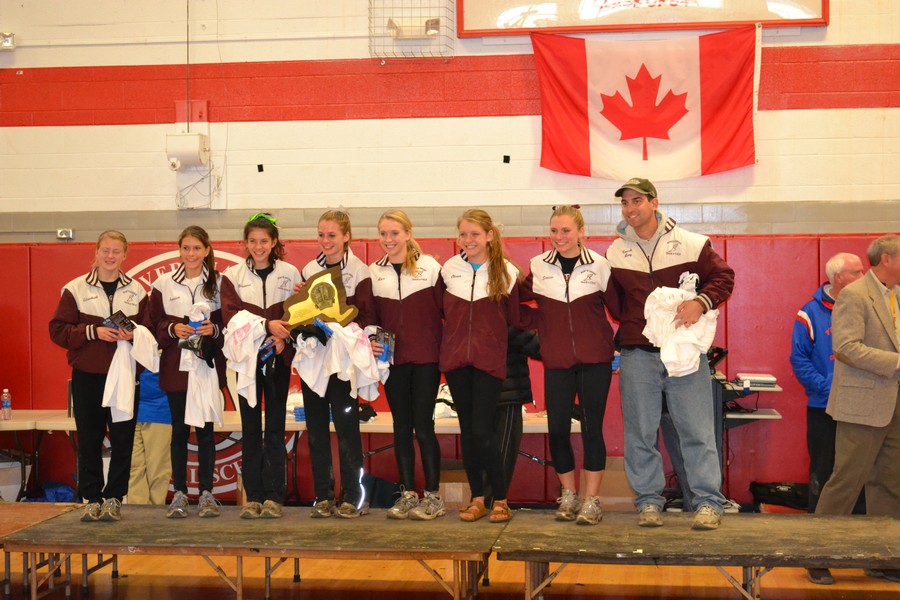 Breakdown:  The race was closer in the predictions than it was in reality.  North Shore swept the top 3 individual spots, followed by Lauren Mullins of Johnson City, who is working off a minor injuries.  Burnt Hills-Balston Lake couldn't catch up with the strong surge that separated the pack early.  We spoke with US #5 North Shore Coach Neal Levy as we awaited final confirmation of the official scores about how his feelings on race conditions and his teams performance:

"Going into it, we knew we had the potential to put 4 in the top 5," Levy said.  " We got 3 in the top 5, which is still good.  The big story is our 5th girl today.  Everyone is always talking about our 5th girl, and I think she really came through for us today.  She really showed she is a legitimate force today.  The scores haven't come out yet, but I think the conditions out here give a good indication of what Oregon was like last year.  From here, our future is a little undecided.  Our plan was always to go to Feds, but with a race in these conditions today, we have to weigh the exhaustion factor and give a final decision.  I am assuming they want to run again, and we will be there next week at Bowdoin." 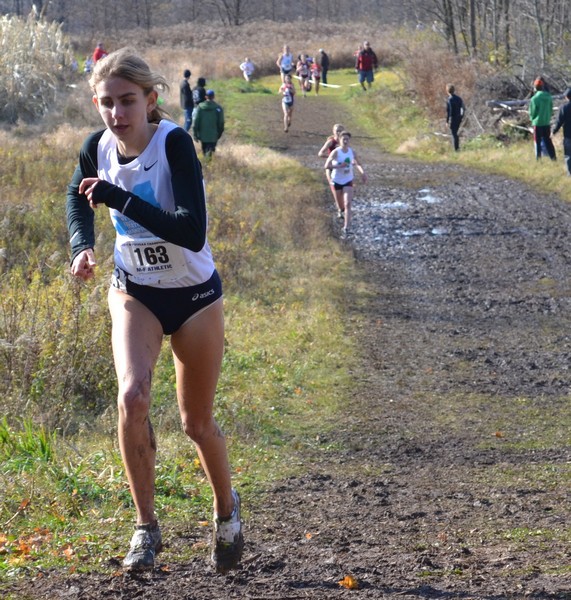 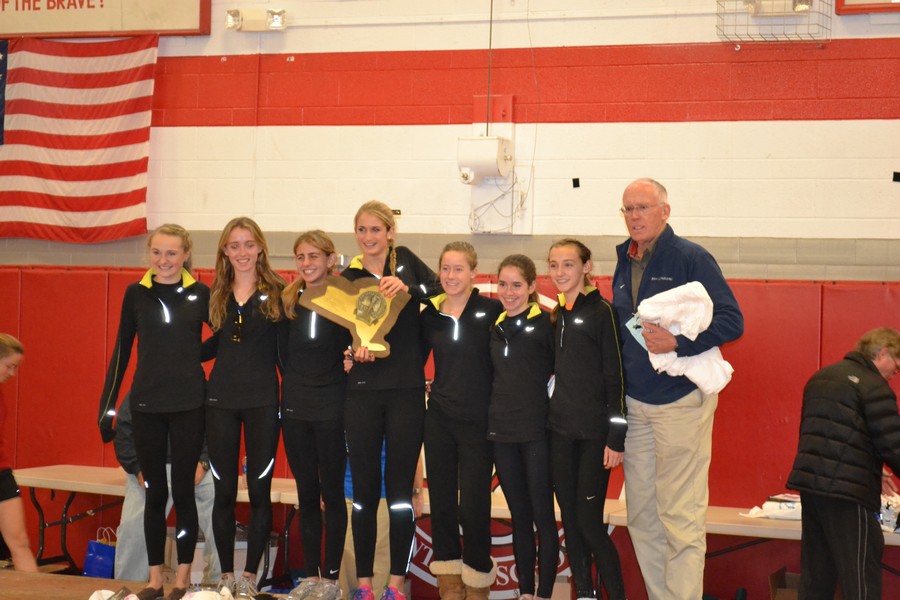 Breakdown:  One of the states most split decisions in the predictions for the race, the rivalry between US #26 Greenwich and US #32 Bronxville is a New York legacy that goes further back than most can remember.  Coming in favored, as they were last year, Greenwich again fell to underdogs Bronxville in a three point decision that found Bville with 43 points over Greenwich's 46.  Both teams top two girls grabbed 6 points for the pair, leaving the decision up to the back runners of the top 5.  Standout Mary Cain of Bronxville again impressed, running further ahead of the pack than expected.  Recent transfer Kelsey Margey of Friend's Academy made the transition to Class C by finishing in third with a time of 20.21.9 . 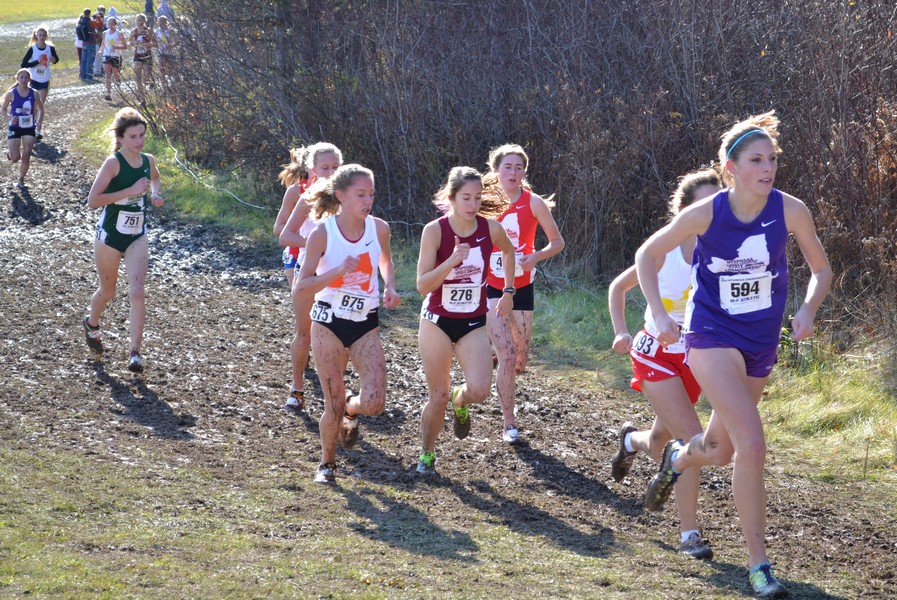 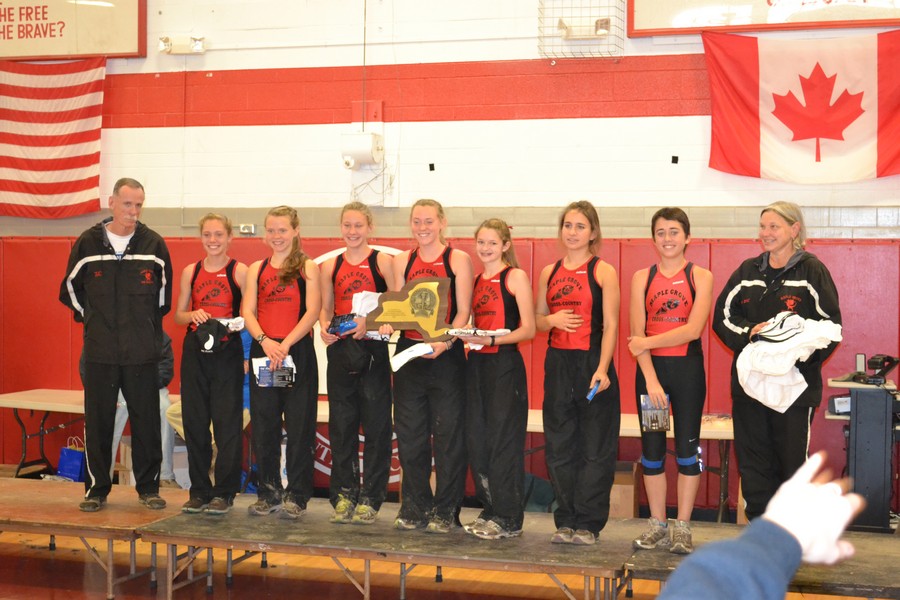 Breakdown:  Maple Grove swept up victory with a team score of 30 points.  2nd place went to Beaver River with 71.  Individual champion, Liz Valento of Pavilion, continued her undefeated season to take the gold in 20:38.  We spoke with her after the race to see how that accomplishment felt:

"I knew coming into this race that I had stiff competition," Valento said.  "I was quite nervous coming into the race, but I just focused on staying undefeated.  I knew it was going to be a tough race, and I looked into as a plus because I haven't had that kind of competition this year.  The course, despite it being muddy, played to my advantage.  Many of the races I've run this season, such as McQuaid and Sectionals, have been on muddy courses like this, and I think it gave me a definite edge over the competition.  For now, I've put in my bid for Federations, and I hope to run well there again."