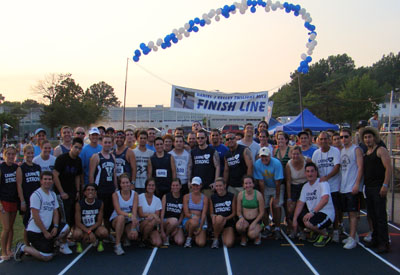 More that 60 former St. Joseph by the Sea track alumni and hundreds of athletes and spectators took on the heat Saturday to honor a former teammate, coach and friend in the second annual Daniel Kelley Twilight Mile.

Dan Lewis, who competed at Monsignor Farrell and later Villanova, won the elite men’s race in 4:24.40 while Victoria Pontecorvo, a Tottenville grad who is now a junior at Rutgers, won the women’s race in 5:18.40.  The event saw more than 500 competitors and spectators despite the track reaching temperatures of 106 degrees.

Daniel Kelley was a special education teacher at P.S. 16 and a former runner at modified coach at St. Joseph’s by the Sea. He died last year after being stuck by an intoxicated driver while on a training run down Hylan Blvd.

Last year, the event posted more than 500 entrees and had 14 heats of the mile.