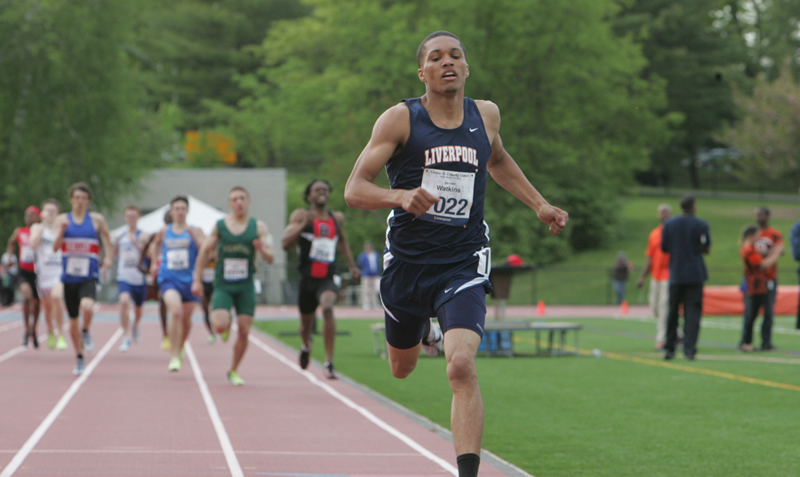 
WHITE PLAINS – Zavon Watkins ran the fastest 800 meters of his high school career Friday and one of the best in the country. But the Liverpool junior and indoor 800 national champ, stood outside the track talking about what he still had to prove.


“I want to show people that I can run a fast mile,” he said.


Watkins torched the last 300 meters of his race to win the 800 Friday at the Loucks Games in 1:50.61 at White Plains High School. His time is the fastest in the state this season and third-fastest in the country. But it wasn’t the time the made the race impressive. Watkins was dominant even after a rough start.


The junior was trapped in a throng of runners for the first 300 meters while Robert Rhodes of Boys & Girls, who finished second in 1:54.14, rolled through the first quarter-mile around 54 seconds. But Watkins exploded on the backstretch and flew by Rhodes before he had time to react. The early traffic spoiled Watkins chance at dipping under 1:50, something no one has ever done at Loucks.


But Watkins had quickly moved on after the 800. He is focusing on Saturday’s 1,600, an event where Watkins has yet to prove his prowess. Watkins qualified for the Millrose Games mile but tripped over Westbury’s Owen Skeete at the Garden and was never in the race. Then the indoor national champ was denied acceptance into the invitational mile at the Penn Relays two weeks ago.


“He looks real sharp right now,” Liverpool coach Justin Block said. “The good news is that he’ll be fresh for that 1600 tomorrow. That’s going to be a big one. He really hasn’t had a chance get in an all-out rhythm”


Rolyce Boston of Sheepshead Bay was also looking to prove a point and he did so in a big way. The senior soared to a state-leading 24 feet, 3.50 inches to win long jump with a personal best and the fourth best jump in the country. Boston said he saw the attention that some of the state’s top jumpers were getting – like Uniondale’s Glen Forsythe, who jumped 23-11 last week, and Tre Bracey of Hamilton, who leaped 23-3.25 for second place – and he wanted his just due.


“Coming off of an injury (Boston strained his right calf in March), I felt like it was going to be hard to be the best in the state,” Boston said. “Then I saw these guys, like Glen and Tre, I just went back to practice and started working hard. I just had to step it up.”


Boston changed from the hang technique to a hitch kick, which he said allowed him to pull more length from his jump.


“I felt good,” Vena said. “I don’t see anything as a bad day. I look at each day as a chance to analyze what I did wrong and get better.”


The senior took the lead after two laps and lead from there.


“I decided awhile back, like in the fall, that I wanted to go for a fast time here,” Noelle said. “I wanted to break the section record (8:56.02 by Jeff Martinez of Johnson City) but it’s really cool to break a record by Salazar.”