PHILADELPHIA, Pa. – As loud and crazy as Franklin Field, especially with 48,531 people packed in the stands, Long Beach Poly’s Aaron Harris felt some gratitude for making the place just a little more quiet.

The place was already in frenzied after the USA teams took the first two places in the 4x100 USA vs. the World. But Long Beach Poly wanted to keep rabid fans waving Jamaican flags to stay seated for just a little longer.

“I love hearing them say USA, USA,” Harris said. “This is USA versus Jamaica. That’s how it’s always been out there. The Jamaicans, they couldn’t make no noise. That felt pretty good.”

Chris Hall, Aaron Harris, Christian Penn, and Myles Andrews clocked the third-fastest time in United States history, finishing in 7:31.69. LBP was a little more than a second off the national record of 7:30.67 set by Virginia’s Ablemarle in 2009. 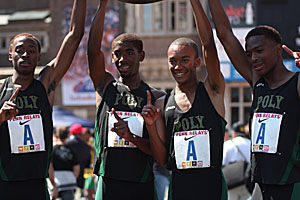 Hall move LBP into the lead after the first leg and the team never looked back. Andrews put it completely out of reach with a 1:49.54 anchor leg. American teams took the first four spots with Abington (Pa.) second in 7:37.79. Central Bucks West (Pa.) (7:38.97) and Georgetown Prep (Md.) were third and fourth, respectively.

The Jamaicans did get some revenge in the 4x400 Championship of America when Monru College ran away with it in 3:11.31 on the back of Delano Williams’ 46.21 anchor.

Junipero Serra (Calif.) had fallen to fourth by the time Darrell Fuery took over on the third leg. He kept Serra in a tight pack fighting for second. Long Beach Poly’s Kameron White made a monster move on the final curve to bring his team up from fifth into a wrestling match for second place.

Serra’s Pete Lauderdale followed and when White faded, Lauderdale kept chasing the Munro College’s anchor to cap the relay with a 47.38 split, good for second-place.

“I just didn’t want to lose,” Lauderdale said. “I tried to catch the person in front of me. It didn’t work out that well but I did my best.” 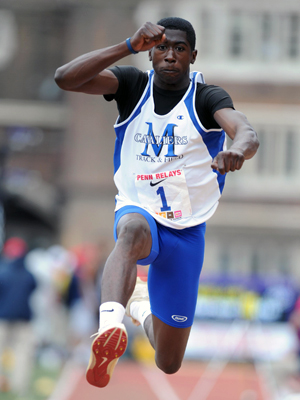 Dendy fouled 3 of his 5 attempts and only cleared 48-10 to advance to the final. He said he spent most of the competition swaying between frustration and anger. Dendy couldn’t explain the problem but he did know what he wanted to do before he graduates.

“I do know that I gotta start breaking records,” he said. “I go for the glory. Not just the win. Every winner gets a watch here. But no one gets a record without really, really pushing themselves. I know I want to go down in the records books. I want my name to be up there.”

Jermaine Collier of Trenton Central (N.J.) also won the 400 hurdles championship in the morning in 53.11, the fastest time in the country this season.