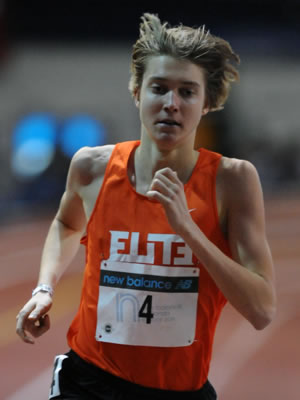 NEW YORK – Lukas Verzbicas didn’t get exactly what he wanted. But there isn’t much more he could ask for.

The Carl Sandberg (Ill.) senior started his weekend record assault Friday at the New Balance Indoor Nationals by breaking his own national record in the 5,000 meters in 14:06.78.

“I felt better than the last time I was here,” Verzbicas said, referring to his national 2-mile record attempt last month at the New Balance Track and Field Center. “Seven seconds would have been a little better.”

Verzbicas said he never questioned his ability to top his own record. But his plan was to run under 14 minutes.

“I went out a little too fast there,” Verzbicas said. “It just felt really easy. “I’ve got to control my pace a little better.”

The girls 5,000 national record also fell Friday when Indiana’s Waverly Neer made her move on Kathryn Fluehr (Naples, Fla.) with a half mile to go. Watch girls 5K video here 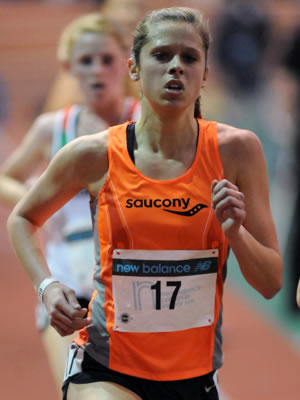 “The last half mile was pretty rough,” Neer said. “My legs are still shaking. I just saw her falter a little bit. I’ve been dreaming about being a national champion my entire last and this was my last chance.”

So Neer moved ahead and kept pressing even when her legs disagreed with her decision. She finished in 16:35.15 eclipsing a record of 16:43.02 set by a seventh-grade Brianna Jackucewicz of Howell North Middle School (N.J.) in 2004.

“It’s all about perspective,” said Neer, who see many more races at the Armory next year as a freshman at Columbia University. “I’m really a lot stronger mentally than I was. Throughout high school I’ve gone through some injuries and that was rough. But I think it’s the mental toughness that carried me today.”

As cliché as mental toughness is in sports it was a theme in the distance medley relays. Stotan Racing (Fayetteville-Manilus), with Katie Sischo,

Sischo, was coming off of her worst race of the season, a disappointing seventh-place finish in the 1,000 meters at the New York State meet. Chapman, after a cross country season weighed down by a lingering flu, was running her first race of the winter season.

“It’s a lot different to run a team race,” Sischo said. “We’re FM. We run cross country together. We’re a team. Out here, if I didn’t get my team ahead, if I didn’t do well it would all be my fault. I have to do it for them.”

Sischo mustered a 3:30.3, 1200-meter leadoff leg, that gave her team the lead for good. FM coach Bill Aris said before the race that if his team did everything right, they could run about 11:40. And that included Chapman, who started track workouts specifically geared toward this race just over a month ago.

“It was such a rush of adrenaline,” Chapman said. “After the first two laps, I said ‘Oh my God, this is an 800,’ and I had to remind myself to slow down.”

There might not have been a team that relished in a national title more than Warwick Valley. Tim Luthin, for example, has been a part of five runner-up relays at the national championships, including second place finishes in the DMR indoors and outdoors last year.  Watch boys DMR video here

But this time, after an outstanding 3:03.4 leadoff by Paez, Luthin had the baton in front for the anchor leg. St. Benedict’s Prep sophomore Edward Cheserek used a ridiculous 53.9 first 400 meters to shrink the gaping lead and dash into a pack that included Luthin, Mike Mazzaccaro of Christian Brothers Academy (N.J.) and Jim Rosa of West Winsor-Plainsboro North.

Luthin dropped back to fourth with 500 left but pulled back into the bunch nearing the bell lap. Then surged past Mazzaccaro and held him off in the stretch to help his team win and smash their own New York State record 10:02.74 (they previously held the record at 10:08.50).  Luthin clocked 4:08.7 on the anchor.

“I obviously run better with a baton in my hand,” Luthin said jokingly. “I was just thinking of the Millrose Trials when Mazz outkicked me. His kick is dirty. I just knew I had to go.”

Paez, surprised by his own leg, said that he never doubted Luthin. That’s because last week, before he flew to Seattle for the PR Brooks Invitational, Luthin ate what Paez said was a pound of pasta at dinner.

“He had a second dinner,” Paez said. “It was disgusting. But he can eat anything. Once I saw him do that I knew that he could do anything.”