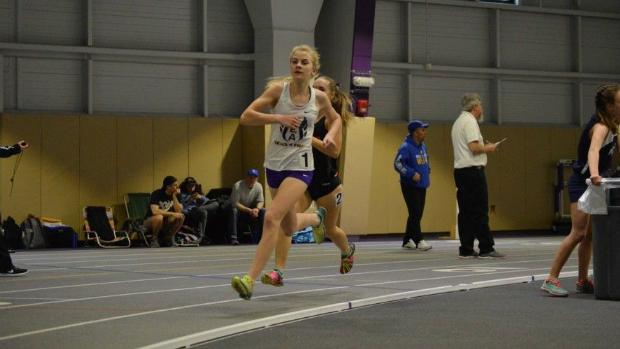 The section 6 season got into full swing on Saturday at Houghton College.  There were 3 double winners on the day including Morgan Halt from Amherst (55 Hurdles and High Jump), Natalia Surdej from Lancaster (shot and weight throw), and Aaron Jones from Hutchinson Central Technical Institute (55 Hurdles and 600 meters).

Throwers front and center in the early season.

Section 6 and Western New York has long been known for the throwing events throughout New York State and this season appears to be no different.  After have a throws only competition last weekend where William Gross from St. Josephs Collegiate won the weight throw in a NYS #1 67'0, he followed that up winning at Houghton this past Saturday with a heave of 62'5".  For the last two weeks Lancaster senior Jonathan Surdej has been the story in the boys shot winning the opening meet in a NYS #1 57'4.5 and then following that up with a win at Houghton College in 57'1.  Not to be outdone by her brother Lancaster sophomore Natalia Surdej won both the shot and weight this past weekend at Houghton College, including the top mark in NYS in the weight throw.

Sweet Home jumpers continued their recent run of success as they took the overall win in both triple jumps and also the runner up in the girl's triple jump.  Defending indoor and outdoor section champion Kaleb Luton won the boys triple jump in an indoor personal best 44'11.5".  On the girls side of the triple jump freshman Lanee Hall had a big PR of 37'3.5" to win by just over 2 foot against her sister, 8th grader Amari Hall who leapt 35'2".

Cheektowaga senior Jake Kaminski had a good start to his season winning the high jump by 5 inches of Luton from Sweet Home and coming in 2nd place in the triple, behind Luton, with a personal best 42'4.25."

Orchard Park stole the show in the long jump with junior Sarah Puskar opening her season with a win in the girls Long Jump, while Nino Rivera won the boys long jump.  Amherst athlete Morgan Halt opened with a good performance, winning the high jump in 5'0", and running 9.05 to win the 55 hurdles.

Aaron Jones doubles up on the track

Hutch Tech senior Aaron Jones demonstrated his versatility winning the 55 hurdles and then going all the way up to the 600 to win that in 1:27.43.  Aaron showed the early season form that makes him one of the favorites in section 6 in almost any event he chooses.

Freshman Megan McLaughlin looks ready to go as she ran a steady race to pull away from the field by over 20 seconds to win the girls 3000 meters.  Junior Abraham Averhart from Niagara Falls, running in his first indoor meet, won the 55 meters from lane 8 in a very respectable 6.76 seconds.  Amherst junior Maxana Grubb started her season off right where outdoors ended last year, as she dominated a very good field in the 600 meters winning in 1:36, and then doubled back as Amherst also won the 4x800 relay easily over the combined squad from Holland and East Aurora.  However on the boys side the EA/Holland connection won the 4x800 by 7 seconds over Orchard Park.  The EA/Holland connection also struck in the girls 4x400 they outdistanced Hamburg by 4 seconds.  Niagara Falls brought Averhart back in the 4x200 to win by 2 seconds over Hutch Tech, as they look to be the early season favorites in that event.  Defending girls 4x200 champions won their first meet of the season holding of the young Sweet Home squad (even though they were in different heats) and North Tonawanda was able to get a victory over Cheektowaga in the boys 4x400.  The North Tonawanda team featured William Guagliardo who also won the 300 earlier in the day in an impressive 36.70 on the flat 200 meter track!

The girl vaulters also put on a show Saturday  Falconer's Rachael Ward opened her season with a very impressive 11'6" vault to win over Leah Pasqualetti of Orchard Park, who vaulted 11 feet.  Sweet Home sophomore Eve Giancarlo went 10'6" for 3rd.  Those vaults are currently NYS #1, NYS #2, and NYS #4 respectively.  On the boys side of the vault Kenmore West's Chris Kaszynski went 13'0 to take the win.

Most teams will compete this upcoming weekend at Buffalo State, with the section being divided into groups for a Friday night meet, Saturday morning meet, and Saturday afternoon meet.