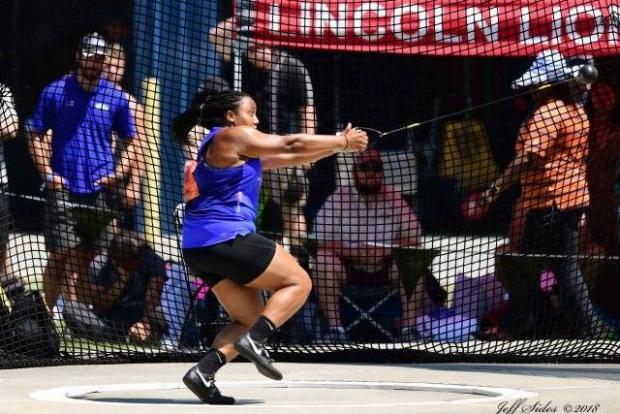 If the Outdoors Optional Triathlon ThrowDown had been contested on the ides of June, the winner would have been the double States Federation champ in the shot and discus Samantha Morillo who had a lead of 88 points in her selected three events. But two days later on a Sunday morning at NBN Outdoor, Monique Hardy launched five hammer throws that were at least 167 feet and a big third one that measured 184-3. Though that PR left her a tiny 4 inches short of victory at Nationals, it shot her up from way way back in 5th place in the OOTTD to victory by 91 points.

The only optional part of the OOTTD was which three of the four outdoor throwing events an athlete used for her score. Opting not to take part in this brouhaha was definitely not an option, and because there was pretty much a three-way tie for 20th, we expanded the field to 22 contestants. For all but one of the 22, the three scoring events were the shot put, discus, and hammer throw, partly because eight throwers did not compete in the javelin and thirteen 4-event athletes scored lowest in the jav. One of the athletes who did not throw the javelin and was therefore ineligible for the final quadrathlon event was Rome Free Academy's Sarah Crockett, who followed up 5th places in the ITD and CSTD with yet another 5th in the OOTTD. 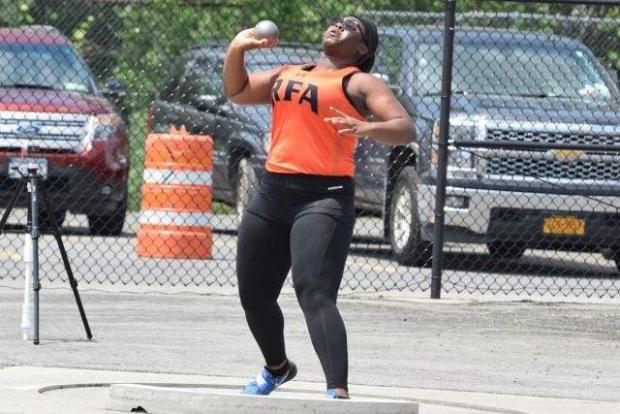 The one OOTTD contestant who did include the javelin as one of her three events was Paul Robeson's Holly Charles, and she is also the only one who did not have a hammer throw result. Since Charles was the #2 javelin thrower in the state, including the event was not a big burden. The hammer throw was the top scoring event for 12 of the OOTTD contestants, for 9 it was the shot put, and the discus was top scorer by 3 points for Stillwater's Madison Krochina. 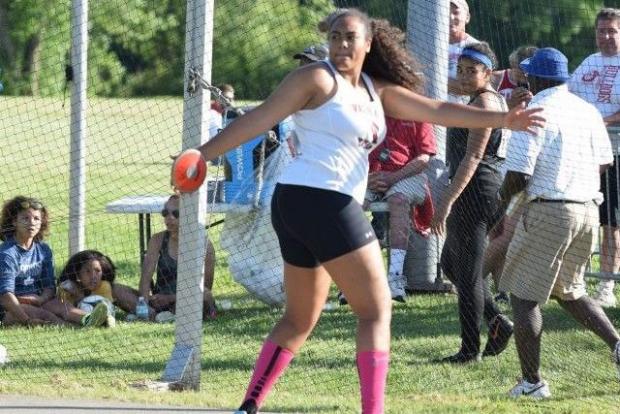 Hardy's 1070 score in the hammer pushed her to the top of the OOTTD, as her huge lead there overcame any issues with ranking 16th in the shot put and 24th in the discus. Morillo topped the charts in the shot and discus, but her 13th place ranking in the hammer left her almost 400 points behind Hardy there, and the final score was 2297 to 2206. Ashley Walsh picked up her third bronze ring with 2118 points, and she was the only thrower who finished in the top 10 in the rankings in each of the OOTTD's three main scoring events. Horace Greeley sophomore Kira Lindner set herself up for a big finish in the final quadrathlon contest with a 4th in the OOTTD. 5th place went to Sarah Crockett yet again after another consistent performance, and St. Anthony's Mikyla Rogers capped off a run of three top 10 finishes in the WTD contests with a 6th place in the OOTTD, just ahead of Jannah Sharpe, who relied heavily on the hammer. 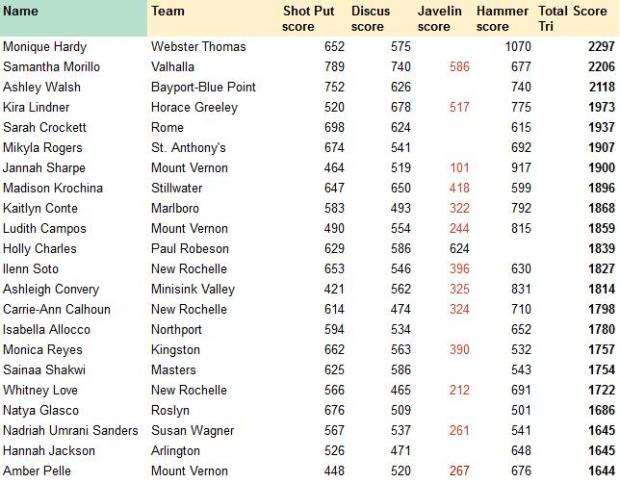 The scores from the javelin marked in red in the OOTTD results note that they were not included for the thirteen throwers who compiled marks for four events. Only Holly Charles had a javelin score that counted here. 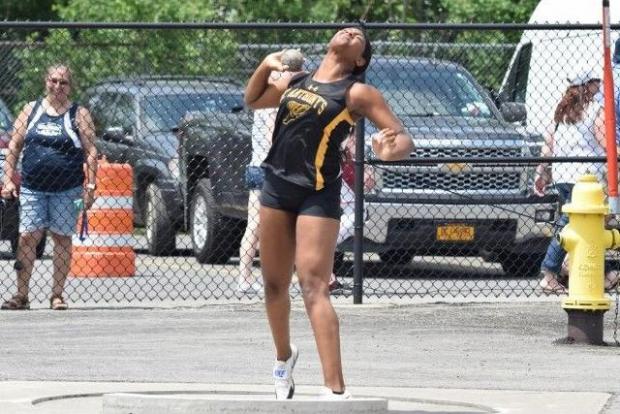