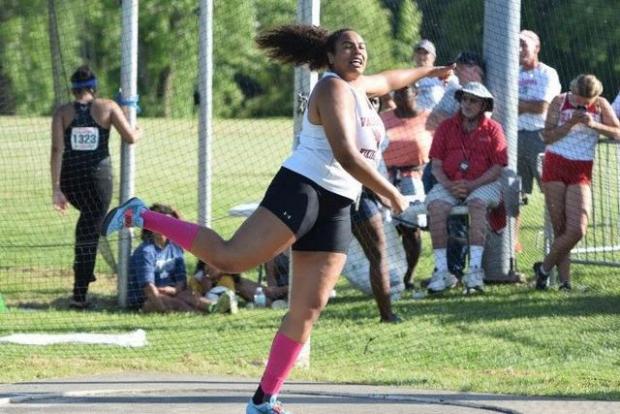 There was no denying Samantha Morillo her gold ring in the Outdoor Quadrathlon ThrowDown after a 4th best NY javelin throw, which for her like all of the OQTD contestants was the lowest scoring event. Morillo's 2792 score was composed of NY bests in the shot put and discus, 16th in the hammer throw, and that 4th in the jav. If the OOTTD winner Monique Hardy had taken a javelin throw to qualify for the OQTD, she would have needed a Top 11 NY mark of about 102 feet to pass Morillo here.

Fourteen of the OQTD were among the contestants in the triathlon, and six more were added to the ranks to replace the OOTTD contestants who just did three events. Because of the generally low scores for the javelin, the 20th place score for the four-event OQTD is just 26 points more than the same spot in the three-event OOTTD. 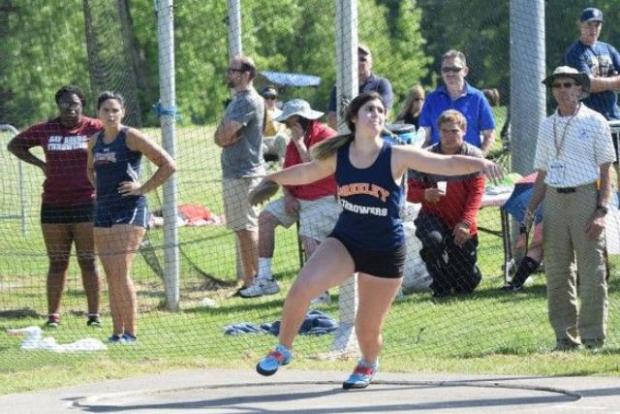 One OQTD who had a very healthy javelin score was the 2nd place finisher Kira Lindner, whose 517 points for her NY #7 jav throw were just 3 less than her score in the shot put. That helped boost her to the silver with 2490 points based on her NY #3 best discus and NY #6 hammer throw.

Both Morillo and Lindner hailed from Section 1, and the OQTD is almost completely made up from athletes from just two sections, ten from S1 and seven from S9. One was from the NYC's PSAL and one from Long Island's S11, and that leaves just one four-event contestant from upstate (north of S9) in Section 2. Clearly there are a lot of good throwers upstate whose opportunities to do the javelin or hammer throw come few and far between. Even OOTTD winner Hardy had just one hammer mark before heading off to Nationals. 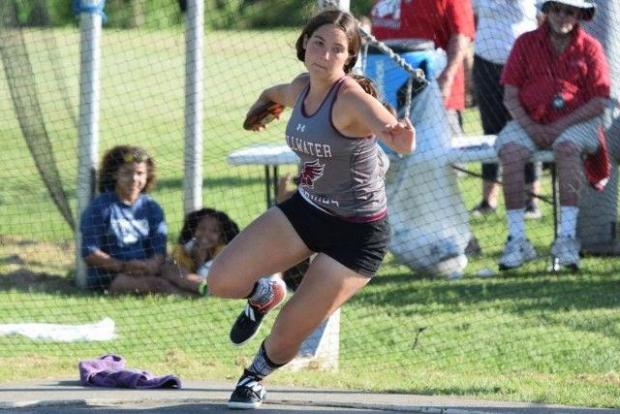 The one upstate thrower who nailed down all four events did acquit herself very well, as Stillwater's Madison Krochina took the bronze ring after filling out her slate when she joined the pack of NY athletes competing in the hammer throw events at NBN. Combined with solid shot put and discus scores and an 88-4 throw in the javelin back in late April, Krochina tallied 2314 points for 3rd place in the OQTD.

4th place at 2225 went to Ilenn Soto, one of four New Rochelle throwers competing in the OQTD along with three from the Huguenots' neighbor Mount Vernon. Marlboro's Kaitlyn Conte added a third small-school D2 athlete to the top 5 of the OQTD as she scored 2190 thanks especially to an NY #5 hammer throw of 143-3. 6th place was taken by Kingston's Monica Reyes at 2147, 8 points ahead of the OCIAA Weight Pentathlon winner Ashleigh Convery. 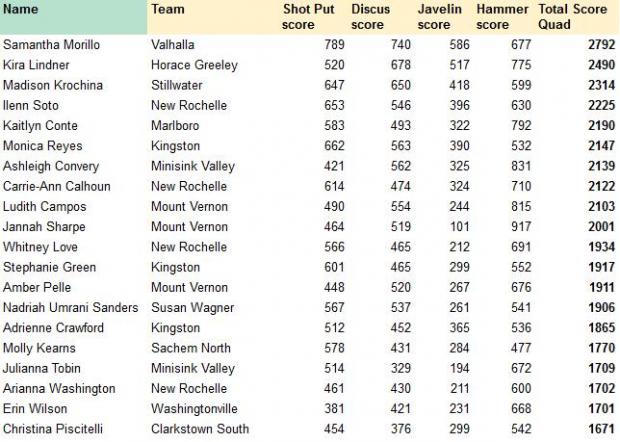 Developments in the weight events could get even more exciting next year as opportunities for the throwers expand. Many of the top contestants in the WTD such as Morillo, Bosco, Walsh, Donner, Krochina, Moore, Rogers, and javelin ace Olivia Morgan are graduated, but Hardy and Lindner are only sophomores, and Crockett, Soto, Conte, Surdej, Reyes, and both Holly and Juel Charles should be back, maybe bigger, faster, and better. Stay tuned, and watch out for flying objects. 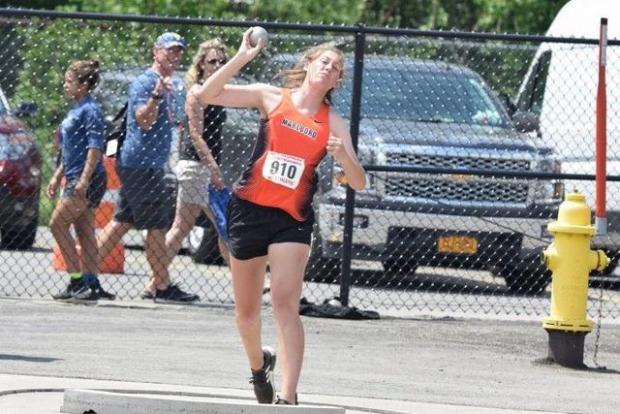