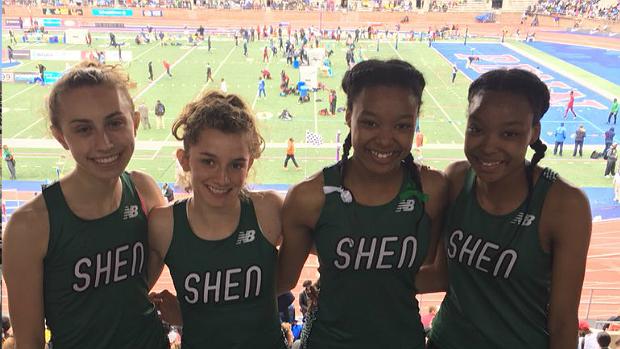 Penn Relays typically signifies the beginning of the competitive season in New York, where teams are beginning to sharpen their form, and the big times start to show.  This year was no different, and we're here to dig in to everything that happened.
Full Results - sorted NY Highlights below

The girls of Rush-Henrietta take home the Northeast Final, a division for schools just outside the final.  Their time of 47.91 puts them nearly a full second ahead of the rest of the State.

It was a rough year for the middle relay this year, as only three teams from New York broke 4mins, lead by Valley Stream South at 3:57.89.

After a dry run in the trials, Shenendehowa showed what it could do with anchor Hannah Reale back in from.  She split 2:12 here, but has gone as low as 2:06, making their 3rd place mark of 9:03.62 even more impressive.  Shen has only broken 9mins twice outdoors, and may be looking to add to that in 2018.

While Lanae-Tava Thomas (Rush-Henrietta) made a respectable Spring debut in the Long Jump with a 20-1.75 mark, good for silver, New York took it's domination out on the Pole Vault.  Placing 1st-2nd-4th, Alana Carroll (Averill Park) led the field with her 12-11.5 clearance.  For a windy day, the high flying mark is that much more impressive.

New York had the strongest contingent heading into the race, so an Empire State victory was highly likely.  What wasn't expected was in the fashion it came to be.  At the final exchange, Benjamin Cardozo was leading the race.  They had been bolstered by a strong 2:11 leg from Paris Peoples.  The exchanges continued for six more teams, and then it was time for Kelsey Chmiel (Saratoga) to grab the baton.  When she did, she took off after the leaders, reminiscent of her Loucks Games anchor leg of 2017.  She began to eat up the lead, passing other teams en route.  It became a mad dash for the finish, with her coming into the lead late.  She crossed the line with the fastest mile of the race, a 4:49.22 leg.  The next three teams finished with 4-seconds of Chmiel, showing how close it really was. 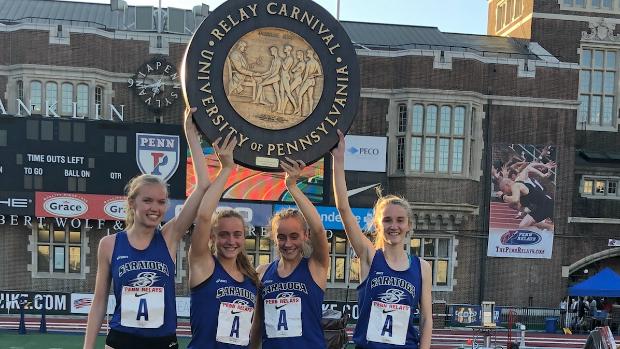