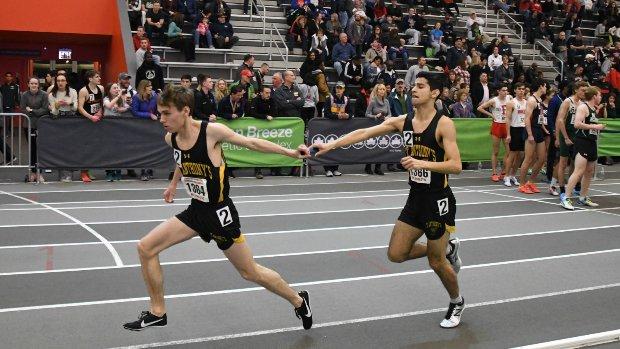 Boys 4x200m - No Cornwall entered here, but State Leader Cardinal Hayes are.  They've gone 1:29.32 this year, and could be brought down even lower in a loaded final.  Brentwood, Uniondale, and Sweet Home also make up strong contenders in the field, all of them at 1:30.00 or better.

Boys 4x400m - This looks to be replay of the State Meet, with both Newburgh and Freeport entered in the fastest section of the relay.

Boys 4x800m - New York occupies both US #1 and US #2 in the relay, and both teams are entered at full force.  Saint Anthony's beat out Northport at States, but Northport was running on tired legs.  St. A's has a 7:45.30 over Northport's 7:48.26, but with everything on the line, this race could get very close.

Boys 4xMile - The boys of Niskayuna have put together a strong team here, and should be in strong contention to be on the podium, chasing after the NXN-Champs, Loudoun Valley of VA.

Boys DMR - We''l get a Yale rematch of Saint Anthony's vs. St. Peter's here, as well as a New Balance Games rematch of Saratoga vs. Xavier.  All four teams have dipped under 10:24 this season.  Northport is also entered, and has yet to put together a full strength relay, but has the component's for a killer time.