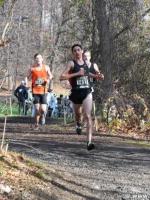 2018 NY Boys XC Preview: Class A...
The Hornets and Hawks are battling at the top again this year, but many other teams are looking to blaze a trail to the front of Class A....

2018 NY Boys XC Preview: An Overview...
New York teams aim to blaze fast trails at Nationals, while a mix of reigning champs and rebel contenders are getting set to shake things up in the state's conference championships....

Top Ten Moments of 2018 - Numbers 8 & 7...
These may not be the fastest times or best performances, but they were moments that were aided by the stories behind them, the rivalries established, and the accomplishments achieved....

Did You Know? 25 Fast Facts About New York's XC Post-Se...
It's been a record season for the Empire State during Cross Country this year....

And Then There Were Three - A Look At New York's Foot L...
Foot Locker Nationals is a storied meet, over 40 years in existence, and the Empire State is sending out three athletes to add to it's legacy....

Manlius Grabs 3 Of 4 Titles, Katelyn Tuohy Continues Re...
Check how it all played out below....