MileSplit NY - Stunning.  We knew going into this weekend that big things were on the horizon, but we just didn't know the caliber of the performances we would see.  Performances were split between the Armory Collegiate Invite in NYC, and the New Balance Grand Prix in Boston.  Highlights don't do each mark justice, but we hope to clue you in to some of the top stories, other than some sily football game.

Mary Cain got to know that feeling intimately on Saturday night, competing in the two mile against a field highlighted by Ethiopia's Tirunesh Dibaba, the defending Olympic champion in the 10,000 meters and four-time world champion, as well as the 5000 meter world record holder. Having already shattered the high school 3000 meter record, running 9:02.10 in January at the University of Washington, Cain was no stranger to competition, and has a mentor in Alberto Salazar whose own pedigree and experience as a junior running against the best in the world makes him the perfect teacher in this scenario. Cain, in search of the US junior 2 mile record of Aisling Cuffe (9:54.22) and Melody Fairchild's 9:55.92 indoor best from 1991, surely had the right field to wrestle with.

Dibaba was quickly a non-factor for Cain, running 9:13.17 and taking over the crowd and the field. Cain bided her time through a smooth first 1000 meters, going 3:02, way under the pace for any of these record 2 mile runs. With the crowd simultaneously preoccupied by Dibaba and enamored with her, Cain just ticked off the laps like checks on a checklist, seemingly unfazed by the break-neck pace that the entire field was running. But, something changed around 2000 meters, a split that Cain hit in 6:03. She was no longer racing the ghosts of Cuffe or Fairchild, and no longer concerned with a record whose conclusion was foregone. She was concerned with the professional field around her. Clicking off another 3:03 1K, Cain never appeared strained, never appeared nervous, and never appeared to struggle. As Tara Erdmann led her through a 4:50 mile, Cain was not satisfied with simply running an impressive high school time. She wanted something more.

Those who witnessed her final lap, a 31.5 rocket 200 meters that showed no sign of fatigue from the 9:04.51 3000 meters before it (a distance only run as fast by a high schooler a month earlier, her own 3000 record), will understand what I mean when I say this. Cain exhibited what Salazar must be most proud of- poise. Salazar was known for his toughness, his patience, and his never-say-die finishes (see: Sun, Duel in the) and Cain, we hope the next great name in American distance running, has all of the mental tools that he so often demonstrated. Her arms, her legs, and her face maintained perfect symmetry, and while it appeared easy for her to run 9:38.68 for two miles, we assume it mustn't have been so.

When Canadian Olympian Sheila Reid took control of the pack with 2 laps to go, nobody would have blamed the teenager Cain for fading just a bit. She still would have dominated the record, and the crowd would have pulled her in with a huge ovation. But, all Reid's move did was awaken Cain to something even more special, and that 65 second final quarter must have surprised even her, if not her coach. Something else to chew on, and something the track world wasn't ready to talk about, if not jinx, before this meet, is that Meseret Defar's 9:34.03 World Junior record is now well within her reach.

And just a tidbit from our twitter feed last night

Girls' Night Out At New Balance

Mary Cain is not the only prep phenom in New York looking to break all the records.  Senior Kadecia Baird of Medger Evers, now back after time off, is looking to take down the sprinting side of the record books. She came just shy of snatching the National Record over 300m on Saturday, going 37.54, making her US #2 All-Time.  Behind her was Deejah Stevens of Benjamin Cardozo, who went US #8 All-Time, in 37.90.

Cardozo wasn't a stranger to the limelight, as teammate Sabrina Southerland blasted a US #6 All-Time in the 1000m just a day earlier.  Just edging out the competition, Southerland went an obvious US leading 1:30.35 in the event. 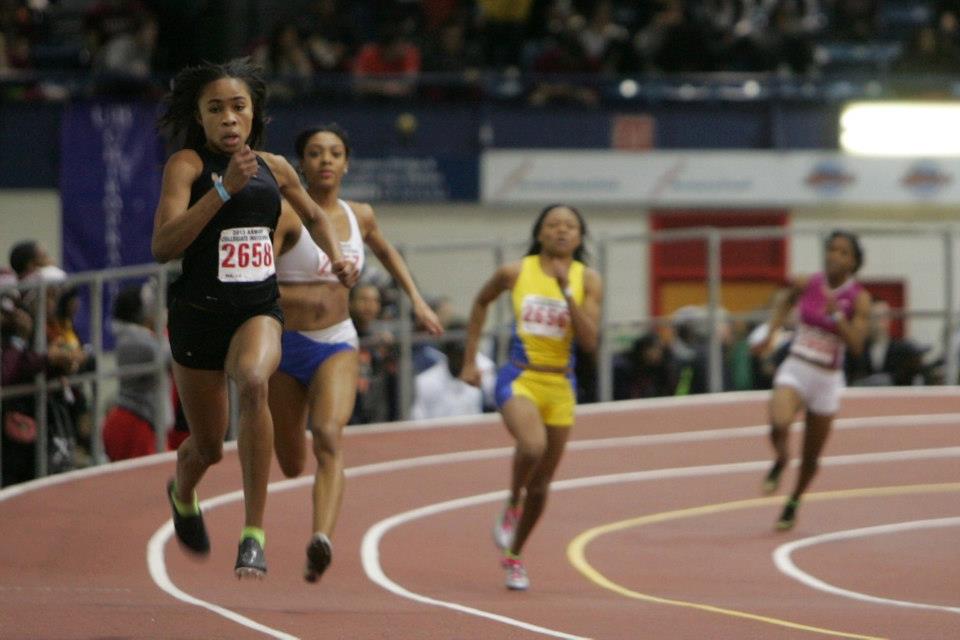 Boys and Girls' Richard Rose is a three time All-American all ready, and that was just his freshmen year.  Now a sophomore, Rose's range has been 200m and up, all the way to the 4x800m.  However, after grabbing the freshmen National Record in the 600m last year, the sophomore record was the next logical step.  He can check that item off his to-do list, as he clocked a US #1 1:19.41, which also stands as the US #1 All-Time for a sophomore.

NY Sweeps the NY vs. NE Event's in Boston

The girls had the 4x400m, while the boys had the 4x800m.  Both events would highlight the New York rivalries with New England, and both oppurtunities went in the Empire State's favor.  In the 4x400m, Jazmine Fray of Kellenberg laid down a 55-second split to snatch victory in 4:02.14.  In the longer relay, the boys battled it out, but it would be St. Anthonys' coming across the line smiling. going NY #2 7:51.98 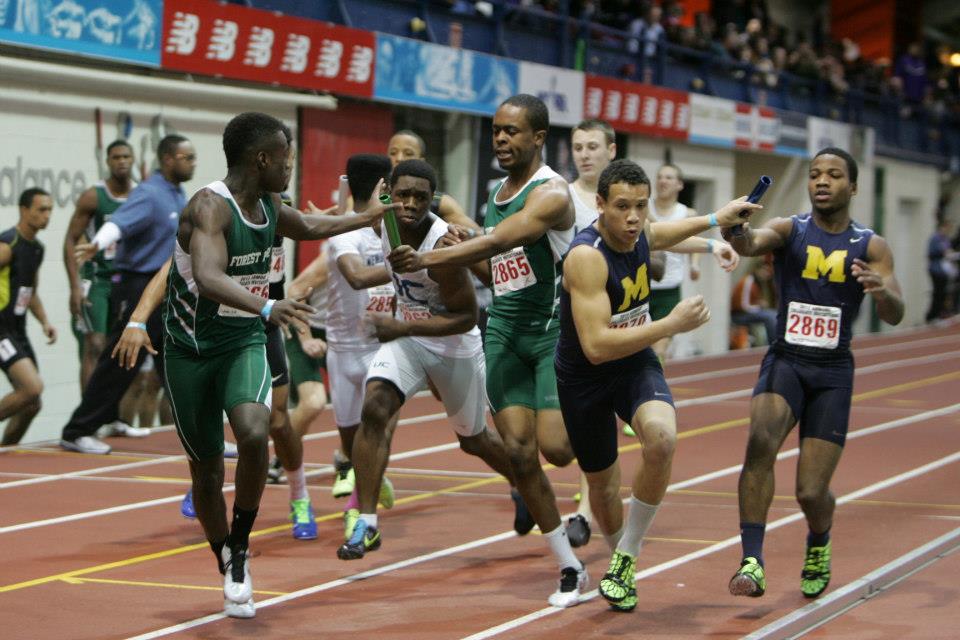 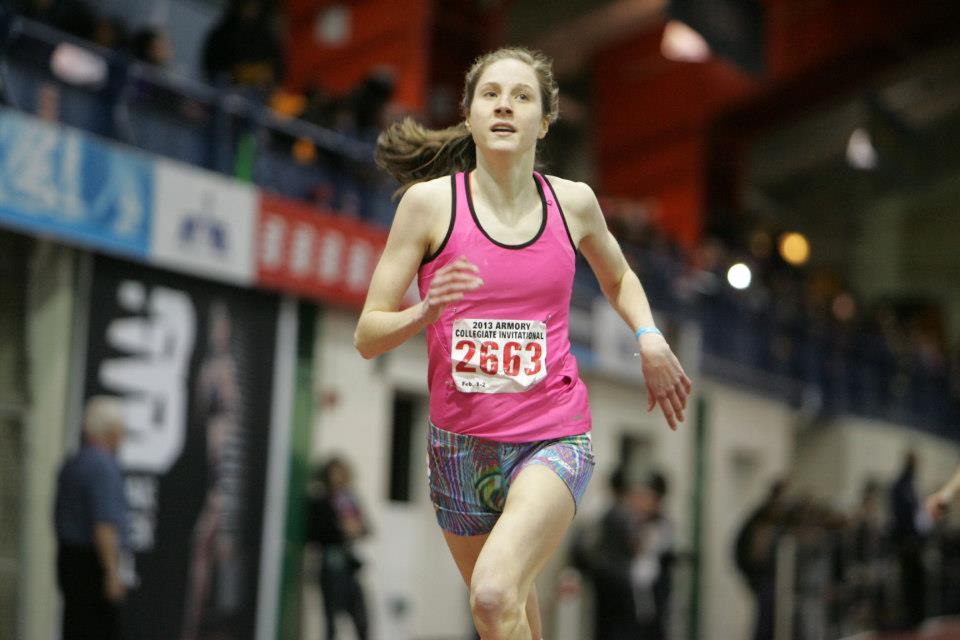 Emma Gallagher, only a sophomore, crosses the line knowing the time was good 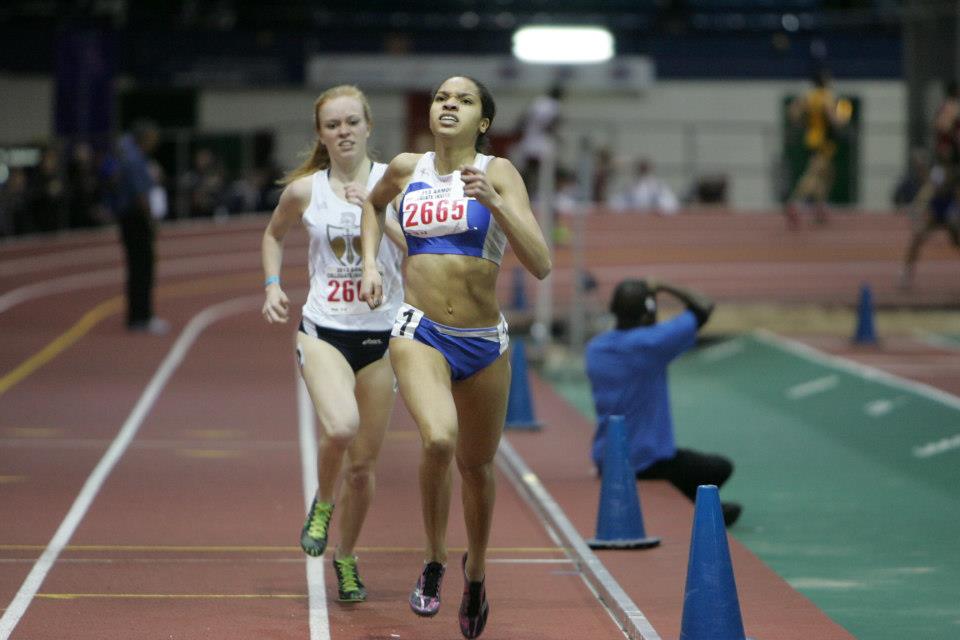 Sabrina Southerland shows why she is dominating the National Leaderboard this season. 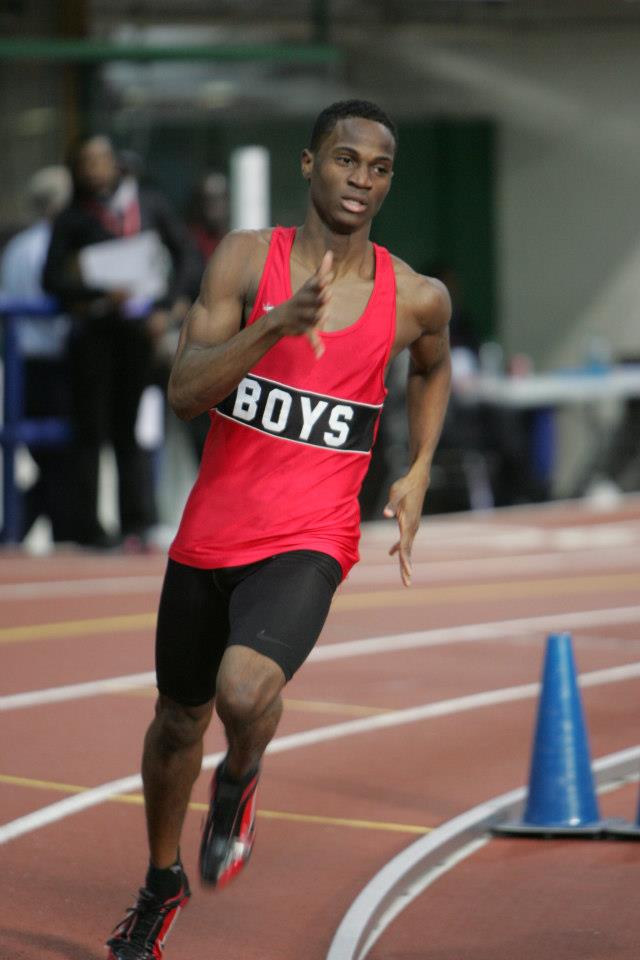 Richard Rose crosses the line as the new record holder 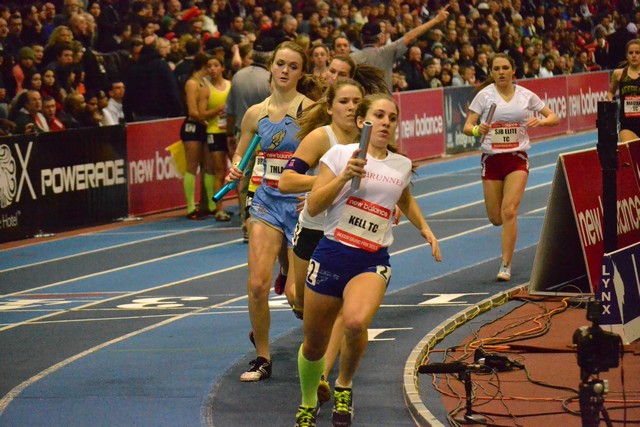 Kellenberg found themselves in the lead pack early 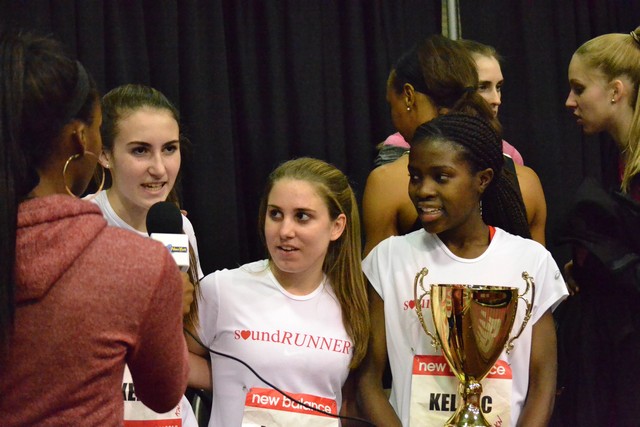 ...And would hold on for the win 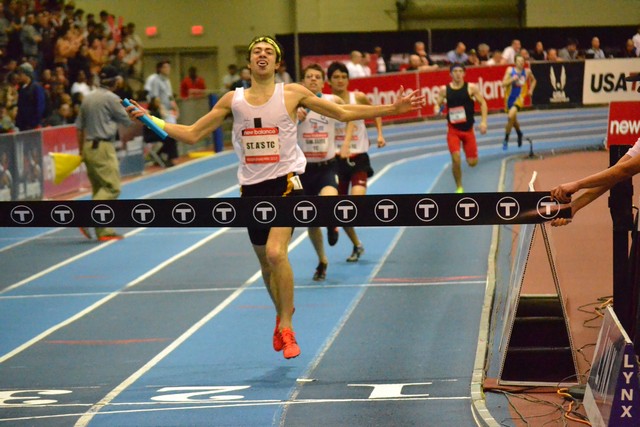 After a hard fought battle, St. Anthony's was relieved to cross the line clear of the competition. 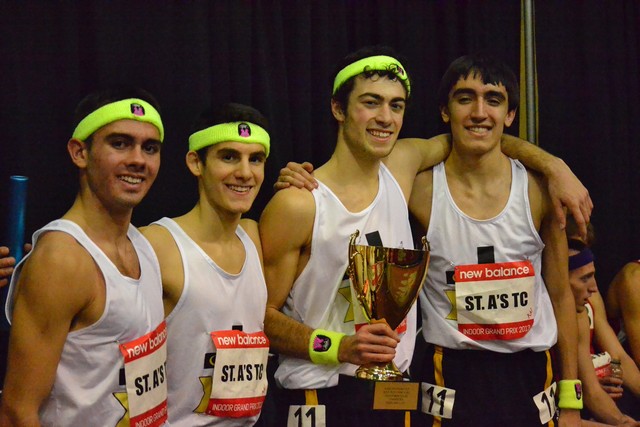 They too, held tight on their newly won trophy. 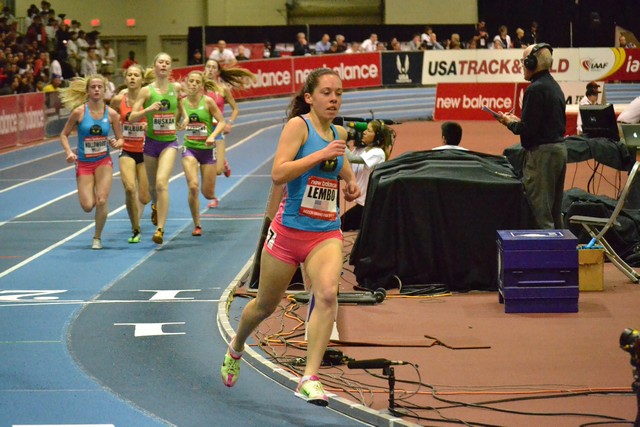 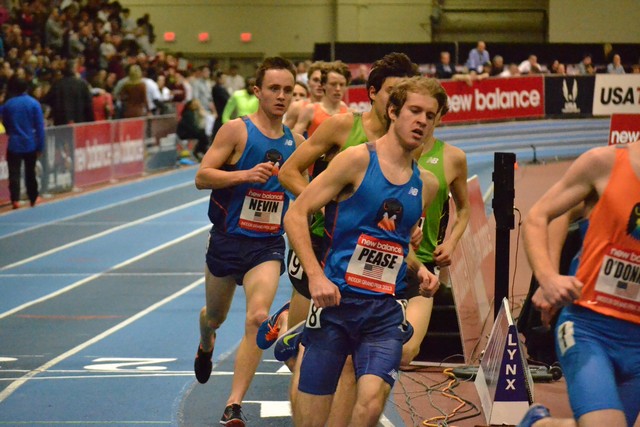 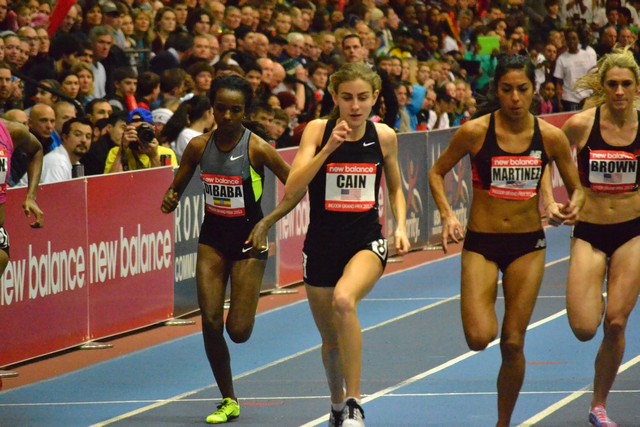 Not bad company for Cain to keep, between a three time Gold Medalist at the Olympics, and the fastest female miler last year. 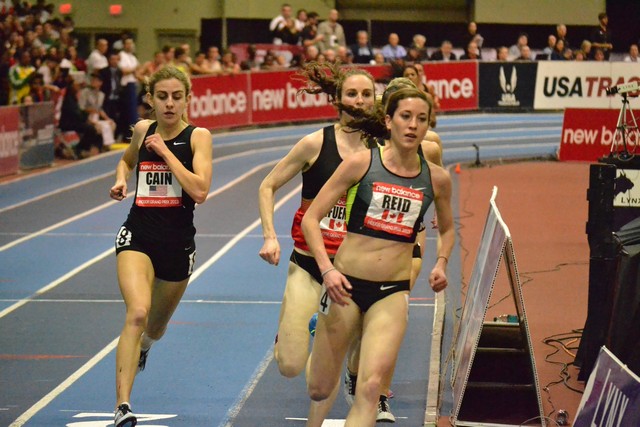 In the final lap, Cain would run wide to break the field, and use her kick to launch a 31-second last lap.