Schenectady NY - What could be described as one of the biggest little meets in the empire state, the 77th Eddy Meet provided great races at an unbelievable pace.  Once finals began at noon, and temps had reached mid-80's, it was four hours of non-stop finals that provided some of the best action the state has seen all year.  Part of this is due to the steep qualifying times, which guarentee anyone who runs deserves to be there.  Another reason performances were all-around good was the carrot each athlete eyed: whomever was named Athlete of the Meet would be awarded free flight, hotel, and entry to New Balance Outdoor Nationals in North Carolina this June.  Despite Shaker and Saratoga losing some of its' key runners to prom, this meet really was flying.  The competition was so fierce, it came down to five solid performances for the Athlete of the Meet, as voted by the coaches.  But first, there were some other notable highlights as well. 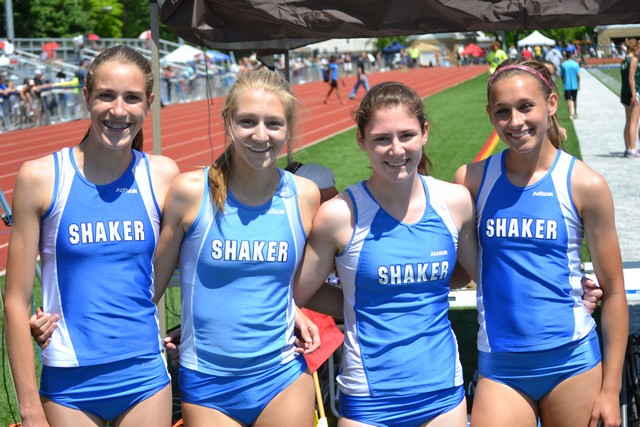 It didn't take long for the leaderboard to be re-written, as the girls SMR from Shaker took down Benajmin Cardozo's state leading time from all the way back at the New York Relays.  Shaker's time of 4:02.53 is now the new NY #1, and with it comes a special prize.  New Balance sponsored both the boys and girls SMR, with the winners entry fee's for Outdoor Nationals to be entirely paid for.  And that trip is well deserved, as the girls have earned themselves a US #5 performance.  That all but guarentees we will see the Bison down in Greensboro. 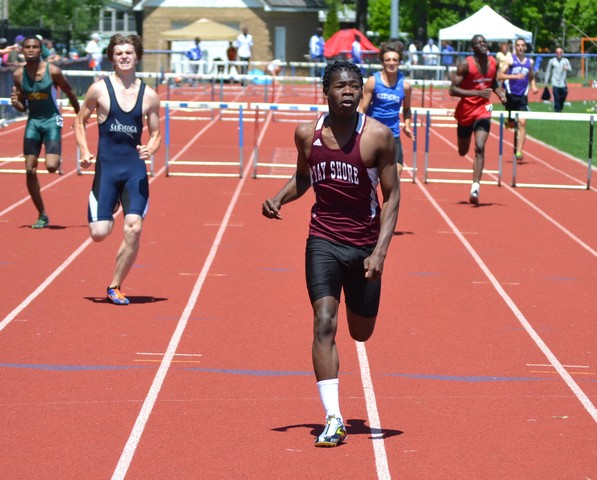 Bay Shore's Kadesh Roberts cruises to an easy win in the 400m hurdles, with a time of 53.54.  Although not his PR, Kadesh is US #2 in the event, less than a second behind PA's Eric Futch.  The Bay Shore crew also solidified the girls 400m hurdles, as teammate and also state leader Jessica Gelibert won in 61.47. 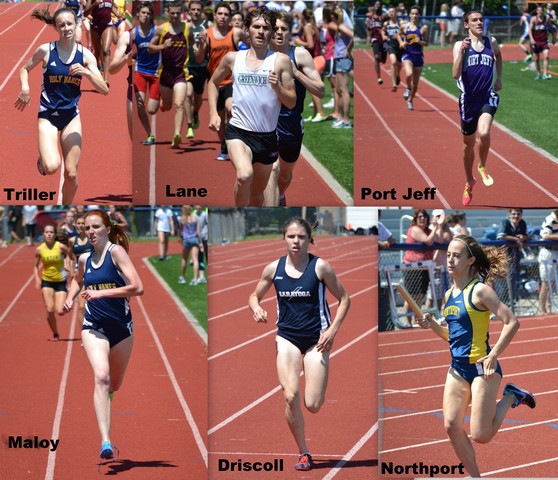 Top 5 Competitors (In No Particular Order)

Watkins proves he is a triple threat 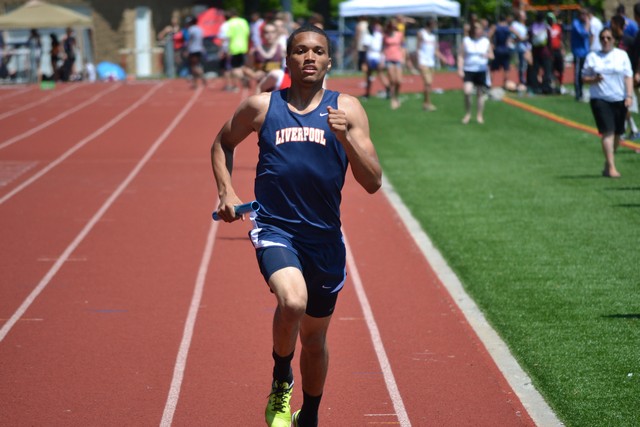 Zavon Watkins of Liverpool had a busy day, as the finals heavy schedule was not made for doublers, let alone triplers.  But that will be something Watkins will need to get used to, as the Sectional schedule for Section 3 wil test even the fittest athletes.  Watkins proved he could handle the difficulty, as he won all three of his events.  He first solidified his spot in Nationals when his squad went 3:31.9 for the SMR, with Watkins noticeably slowing down to preserve himself for later races.  Coming back in the 800m only 5 races later, with 4 of those being split between 100m and 110 hurdle finals, Watkins ran a very physical half mile race.  At the mid-point, Colonie's Giancarlo Sainato was leading a close knit pack that had saw Watkins boxed in, but Zavon found a hole on the turn and let loose.  Again pulling up near the finish line, Watkins crossed in 1:52.82.  Liverpool returned at the conclusion of the meet to win the 4x400m, which Watkins split roughly a 48.9, also aided by his teammate Ryheim Lawes' quick leg.  Overall, it was the hat trick for Watkins, with a fully paid entry fee for Nationals as a reward. 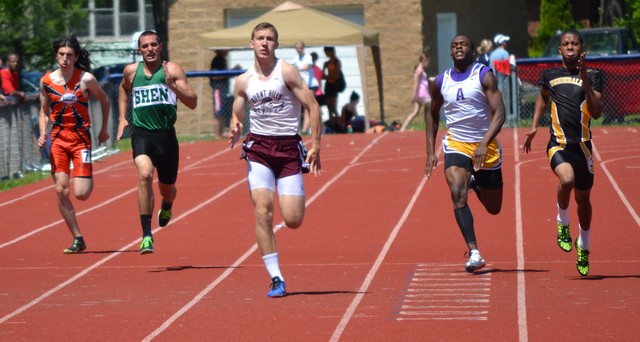 Joe Carr has had one goal all season: beat his fathers PR of 21.9.  Carr, a senior from Burnt Hills-Balston Lake, did that and more, as he ran a very quick 21.33 performance.  That time topples the previous state leading time from Laray Smith's run of 22.64 at the Mayor's Cup.  Carr, simply happy to best his father's time, also attained a new Section 2 record for the event.  We spoke with Carr after the race, to see what his goals for the season were, watch below.

Pencilling Ticonderoga into the Leaderboards 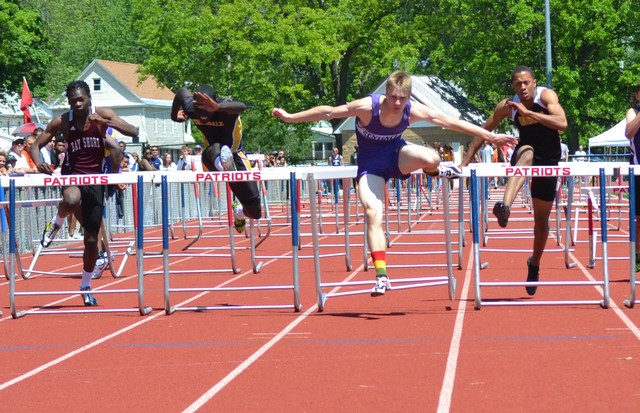 Hailing from Section 7 can be a difficult task for some runners.  The Section, one of the smallest in the state, generally does not hold Invitationals that produce National caliber times.  Jay Hebert, of Ticonderoga, has traveled to Section 2 only once before this year, when he ran his then-state leading time of 14.35 for the 110 hurdles at the Queensbury Invitational.  However, it was his repeat performance at Eddy that solidifies him as a serious favorite in the sprint hurdles, as he lowered his state leading mark to a strong 14.07.  To put that into perspective, that mark would have rested at #4 for all of 2011, and #2 for in-season competition.  To add to this impressive accomplishment, factor in that Hebert is only a sophomore.  His race today puts him .04 away from the New York State Record for sophomores, a mark he is likely to grab before the season is over.  Also, Hebert's time makes him the 3rd fastest sophomore in the US this year, despite sprint powerhouses like Texas and Florida being well into their respective post-seasons.  Congrats, and watch below as we ask Hebert about his race 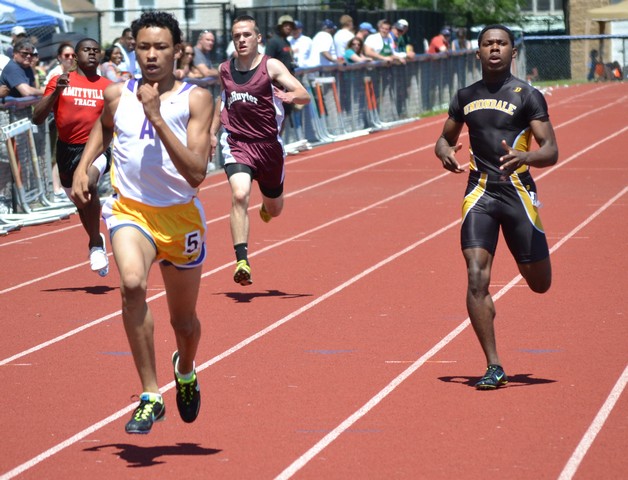 You may never know who you are lined up against. Upon the 400m start line, all eyes were on Tresean Goodwin of Uniondale.  And for good reason, as Goodwin was the top seed at 49.15, as well as Goodwin being a certified speedster.  However, something happened today that nobody was expecting, not even the athlete himself.  To Goodwin's right was Izaiah Brown of Amsterdam, a freshmen to the sport, whose first season ever saw modest success in the early season.  That success in various dual meets and smaller invitationals earned Brown the second seed, with a 49.6.  Brown proved that seed times are meant to be broken, and busted out an incredible PR, lowering it down to 47.80.  Not only is that time NY #2 overall, it rests as US #2 for freshmen as well.  As the second fastest freshmen in the country, Brown has overcome what seems to be a Texan rennassaince over the quarter mile, only placing behind Ryan Clarke of Georgia.  Brown's PR put him into the record books as well, as that exceptional run replaces Keith Hinnant's freshmen record of 48.95 for the quarter.  Trailing only Strymar Livingston's mark, Izaiah Brown's performance earned him the Boys MVP title for the meet, and rightfully so.  Watch below as we discuss what pressures such a big time puts on Brown.

Plante-d On Top of the Medal Stand

Plain and simple, Kyle Plante of Colonie is an athlete.  Indoors, she was the 400m state leader, as well as the 300m Indoor state champ.  That position looked to be in jeopardy for outdoor, as junior Kadecia Baird of Medgar Evers Prep posted National caliber (and state-leading times) in both the 200m and 400m last weekend at Loucks.  Plante, who was also entered in the 4x400m in addition to the 200/400m double, returned to the track this week, and proved that Baird's marks are not untouchable.  If anything, it proved that States could push either athlete to that coveted state record of 51.75.

Plante started her day in the 400m, where she outran her heat by a good ten meters, finishing in an outstanding NY #2 54.43.  That mark also stands as US #16 this year.  Returning to the track only a little hour later, Plante again posted a huge time of 23.98, NY #2, as well as a US #20.  However, Plante wasn't done yet.  She had the 4x400m to run.  And it would prove to solidify her as the Girls MVP, as well as the winner of Overall Meet MVP.  And to get the full story on why this run was so outstanding, we have to travel to Texas. 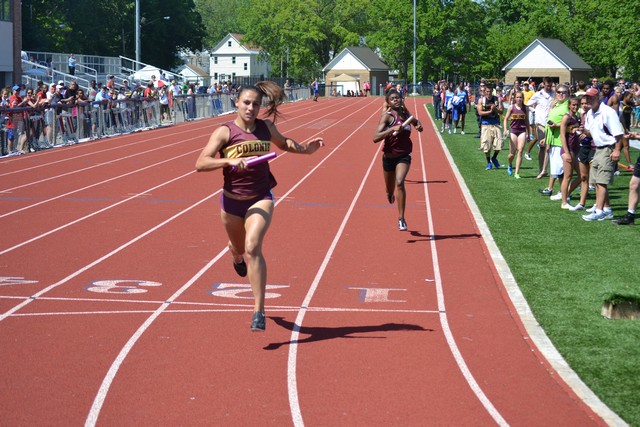 For those who were unaware, the Texas State Championships were this past weekend, 5/12.  Much like the Eddy Meet, the 4x400m relay for the girls was to be the defining race.  In a race that would eventually go viral via facebook and other outlets, the Texas 400m individual champion Courtney Okolo of Lancaster TX would get the baton in a distant 3rd, only to surpass the leaders in a amazingly close finish, anchoring in 52.89.  What makes Plante's race so special is that she accomplished that of Okolo, and then some.  Heading into the anchor leg, Plante was recieving the baton with a minimum 5 meter deficit on Bay Shore's Jessica Gelibert, who was in second and posseses 56-second speed.  Plante maintained an equal deficit until the 200m, then seemed to hit another gear altogether.  By the 300 meter mark, Plante had surpassed both Bay Shore and Uniondale, and came barrelling down the final straightaway, eerily similiar to Okolo.  When she crossed the line, she heard the split that had earned her relay the win: 52.6.  It solidified her as the athlete of the meet, as well as the event of the day.  With her title came the prize, which she was mare than greatful for, as she talked to us about her races, as seen below.  Congrats. 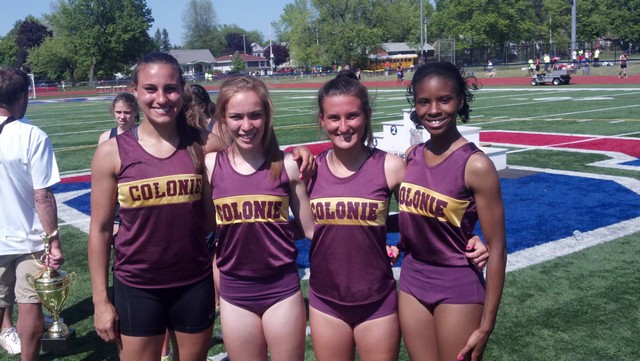