“All right! Lots of water! Keep drinking!”
Gail Emmanuel’s voice jabs the afternoon heat. The Cardozo High School girls track and field coach is surrounded by a few dozen teenaged runners at Queens’ Cunningham Park. They slink out of the shady picnic area, a pack of boys breaking for the cross country path. 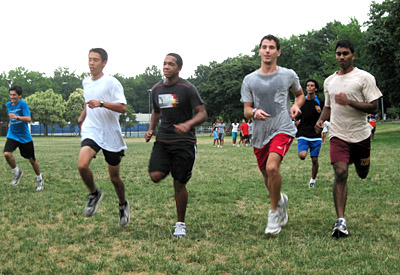 The official start of the PSAL cross country season is nearly three weeks away. Since early July, however, on Tuesday, Wednesday, and Thursday evenings, the PSAL’s free Big Apple Cross Country/Track and Field camp has turned this leafy park near St. John’s University into a running salon.
On an average day, Emmanuel and Townsend Harris coach George Rio lead 80 runners through hill work, dynamic stretching drills, and a healthy dose of long, slow distance. This is mileage-building season, and for runners from public and private schools in New York City and Long Island, it’s a chance to put in the work in a casual environment.
“It’s a good way to work out with other runners you’ll see during the year,” said senior Michael Delligatti of Francis Lewis High School in Fresh Meadows, a State Federation cross country qualifier in 2010. “When you come here, it’s a different vibe. Usually you’re just running with your team.”
In its 10 th year, Big Apple’s camp, which ends Aug. 4, fills a need for prep runners in the New York City area. Its structure is a boost during the grinding summer months. The instruction, which ranges from the correct way to attack a hill to proper stretching technique, is first-rate.
“We’re giving them the tools that they can use for when they start their official practices,” said Emmanuel, who has coached numerous All-Americans at Cardozo, including Oregon-bound 800 meter runner Claudia Francis.   “The proper way to warm up, the proper drills.”
“It helps me get into cross country mode again coming from a break,” said Sabrina Felice, a senior from LaGuardia Arts High School who specializes in the pentathlon. “The coaching staff is amazing.”
The camp is also in demand. That point was driven home vigorously on its opening day when 130 runners turned out despite 99-degree heat.
“I didn’t think they’d come out,” admitted Rio.
They keep coming out. For some, as much for the camaraderie as the mileage.
“Getting to know friends from Francis Lewis, the arch-enemy school (was a high point),” said Townsend Harris senior Josh Solomon. “During the races, he’s one of the guys you’re elbowing. Here he’s one of the guys you’re hanging out with, and spending time with. It’s one of the reasons I like coming here.”
Tweets by MileSplitNY