The young athletes heading to Europe, as members of the U.S. Athletic Trust Elite track and field team, can hardly wait to board the big jet at JFK International Airport.

“I know it’s going to be a tremendous experience for all of us,” said aspiring decathlete Dan Harrison. 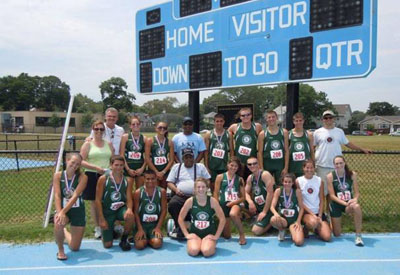 “We’re sure to see a lot and learn a lot over there,” said Connecticut state shot put champ Cherraine Davis.

It will be the track and field opportunity of their young lives and it’s all being put together by U.S. Athletic Trust, a New York/New Jersey-based group intent on encouraging youthful talent to aspire to the sport’s highest levels.

The list of local standouts in the group include: AJ Wolf of Hackley School, the New York state shot put champion, who has committed to play football at Duke; Binghamton recruit Zaid Al Doori of Harrison, who placed third in the 400 at the outdoor state meet. New Jersey high jump champ Fiona Paladino.

The group of young athletes, their coaches, team staff and several parents, will leave from JFK Monday evening.  They arrive in Stockholm, Sweden Tuesday morning and, after some sightseeing, will soon get started on the training and competitive phase of the expedition.

On Wednesday, they’ll train with the Taby Youth Athletics group. Next day, they take part in the DN Galan youth and senior competition event.  On July 29, the classic DN Galan Grand Prix Meet, featuring many of the world’s top elite athletes, will take place at the famed Stockholm Olympic Stadium, site of the 1912 Olympic Games, and still in regular use as a world-class athletics venue, and the young athletes will be there, taking it all in, in the spectator throng.

The next two days they’ll get to compete in that historic stadium themselves, as guest entries in the DN Galan Youth Meet.

On August 1, they’ll fly off to Reykjavik, Iceland.


After two days of training and sightseeing in the Icelandic capital, they will compete as guests in the Iceland Youth Championships, a two-day event set for August 4-5.

The U.S. Athletic Trust traveling team will have some world-class leadership. Its guiding lights are AJ Wolf’s father,  Augie Wolf, the famed Princeton University graduate and world-ranked shot putter who represented the USA in the 1984 Los Angeles Olympic Games, and Frank Harrison, the University of Pennsylvania graduate who was a top performer for Quaker teams in an array of events and qualified for the 1984 USA Olympic Trials in the decathlon.


“We have an incredible trip planned and believe that, for many, this could be the trip of a lifetime; it will undoubtedly be a phenomenal cultural experience,” said Frank Harrison.

Head coach of the team will be four-time Olympian Knut Hjeltnes, the native of Norway who was named to his nation’s Olympic Team for every Games from 1976 Montreal to 1988 Seoul, setting 11 Norwegian records and winning 20 Norwegian national titles along the way. Now USA-based and a graduate of Brigham Young University, he is considered one of the world’s most eminent throws coaches; his West Point athletes have set five Academy records and include three NCAA All-Americans.


Assistant coaches are Debra Vento, the Duke University alumna who was an ACC champion and seven-time NCAA high jump competitor, and Evan Stivala, a recent Syracuse University graduate who was a top performer for the Orange in the long and high jumps, and the multi-events.

Frank Harrison continues to point out that “unlike the U.S., Europeans consider track and field a major sport, equal to the enthusiasm Americans have for the NFL.”

And so the journey is sure to be a major-league experience for these young athletes.