Boston, who his headed to Iowa-Western, will compete in the men’s long jump, scheduled for Saturday at 7:10 p.m. 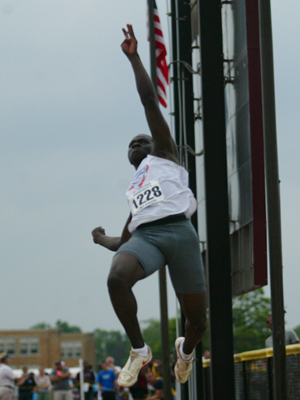 “It’s great,” Sheepshead Bay coach John Padula said. “It’s just giving him another opportunity to go and try to jump 25 feet. It’s also giving him the experience of competing international as he’s going to try to qualify for the next Olympics.”

Boston set a personal best in the long jump at the state championships in June when he cleared 24 feet, 6.5 inches, the longest jump in the PSAL in 41 years. Boston is one of only six jumpers in PSAL history to leap beyond 24 feet. Hall of Famer Bob Beamon, a Jamaica High graduate, holds the record at 25-3.5.

Boston tweaked his right knee at the state meet after his career-best performance and struggled at the New Balance Outdoor Nationals, finishing fourth at 23-10.75. Padula said that he gave Boston two weeks off after nationals and the soon-to-be freshman appears healthy and prepared.

“He came by the school a couple times and we did some jumping,” Padula said. “I think he’s ready to go.

Another Brooklyn star, Eddie Owens of Packer Collegiate, will compete with the U.S. team in the men’s steeplechase. The Princeton-bound Owens on the national championship for the 2,000 steeplechase in June and holds the second seed in the 3,000 steeplechase at 8:59.53. His event is schedule Sunday at 6:30 p.m.

LSU’s Alec Faldemeyer (Minisink Valley) and Oregon’s Phyllis Francis (Catherine McAuley), both locals coming off their freshman campaigns, will also compete with U.S. squad. Faldermeyer will compete in the men’s hammer throw at 9 a.m. Sunday. Francis, the former high school indoor 800 national champ, will compete in the 400. The semifinal begins Friday at 11:55 a.m. Francis set a career best 52.93 in the 400 during her freshman season with the Ducks.