The summer is a great time to look ahead but it’s also the perfect opportunity to reflect. And there were so many moments this past outdoor season worthy of recognition. This is in no particular order. In fact, I shuffled them on purpose. So you ranked them. Let me know if I’m missing something. 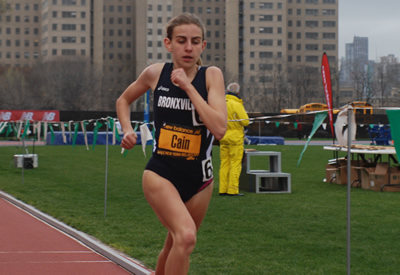 Mary Cain’s 800 at NY Relays: Cain is first here because she arguably had the most memorable season of anyone in the state and maybe even the country. This race, in some way, signified the arrival of Mary Cain. The Bronxville freshman bounced on the entire field in the first 200 meters (think Owen Skeete) and literally made an invitational race at Ichan Stadium look like she was dominating a dual meet in the back of her school. She pushed a solo 2:06.44 at the New York Relays on April 15. By season’s end it stayed the fastest time in the state all season and the fourth-fastest in the country. That turned out to be only the start of a dream season for Cain. She went on mash the state record in the 1,500 twice. She broke the state freshman record in the 3,000 9:28.6 ,earned all-American honors in the mile, finishing fifth, and earned a silver medal at the USA Junior Championships in the 1,500.

Tim Luthin over Chad Noelle at NY States:  Here’s how this went down: Warwick’s Tim Luthin had never broken 9 minutes before and Chad Noelle of Greene, the favorite, had to keep in mind that he had to race the 1,600 the next day at the New York State Championships. The pace was honest but comfortable enough that no one had really pulled away. Luthin tacked on to the pack of a lead pack that included Noelle and Washingtonville’s Martin Hehir until about 500 meters left when Noelle decided to move. Luthin followed. Hehir dropped back. Noelle was smooth and confident and looking to only do enough to win. Noelle hoped to conserve enough to win the 1,600. But Luthin wouldn’t back off. He took a shot at Noelle with 300 left. Noelle tried to squash the move but Luthin didn’t budge. He waited. Then lunged again with 200 left. Luthin, a Stanford signee gained and edge on the home stretch and won in 8:58.92. Noelle, who is headed to Oregon, was second in 8:59.03 and went on to hold off Liverpool’s Zavon Watkins in the 1,600 the following day. 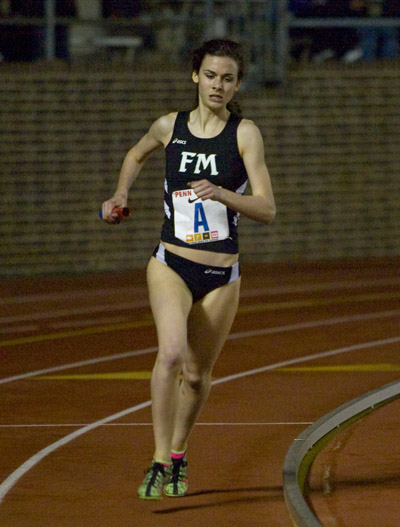 F-M’s DMR win at Penn Relays: The thing that made this race the most interesting is that it played out so much differently than distance medley relays are supposed to. First of all, three legs in, Cardozo was leading. The Judges have gained national prominence for their sprint relays and even made the Championship of America this year in the 4x400 but winning would have, and should have, been considered an upset. And it became plausible when Claudia Francis, a two-time national champ, took the baton for the 800-meter leg. Cardozo wanted to blow the race open. Courtney Chapman, the senior leader of Fayetteville-Manilus, refused to let it happen. Francis had clocked a 53.4 split in the 4x400 earlier in the day, but Chapman matched her stride-for-stride in the DMR. And with about 350 left Chapman was the one to bust a hole in the race, while Francis began to fade. Fayetteville-Manilus went on to win in 11:34.46, a Penn Relays record. The same squad – Jillian Fanning, Heather Martin, Katie Sischo and Courtney Chapman, finished second in the DMR at New Balance Outdoor Nationals in 11:25.13. It was the fastest DMR race in U.S. history with Harvard-Westlake (Calif.) breaking the national record in 11:22.23 and North Shore finishing third in 11:30.45, the three best times in nation history.

Middletown’s 4x400 National Championship: Plenty of drama around this race. There was the fact that a North Carolina team had missed their earlier heat and tried to get into the seeded section. They were refused, which started a ruckus among the crowd, who chanted “Let them race.” The confusion held up the start to the final event of the national championships. After three legs, Middletown was in fourth when Mel Mosley took the baton. Mosley was coming off of one of his worst races of the season, finishing a dismal seventh in the 400 in 47.23. But the Southern University-bound senior split 46.22 on the anchor leg to earn the Middies – Manny Mosley, Shakoy Burton, Web Pierre and Mel Mosley – a national title 3:13.71, the eighth-fastest time in the country this season.

Brianna Nerud cracks 6:30 steeple: The word on Nerud all year had been that she was unrated and outshined by Samantha Nadel’s incredible indoor campaign and even success of the team’s distance medley relay. However, Nerud had all along been emerging as one of the top distance runners in the country. She had started to gain more attention after Nerud clocked 6:40.7 at the Nassau County championships. But Anselmini broke the national record the next weekend and beat Nerud when the North Shore junior clocked 6:38.27 at the state meet for second place. Nerud placed eighth at the World Youth Games, against the best the world could offer in her age group, and finished with the second fastest time in US history in 6:29.56, finishing only behind Maddie Myers (Wash.), who claimed the national record. It’s safe to say that Nerud will never again be a forgetten part of the conversation. 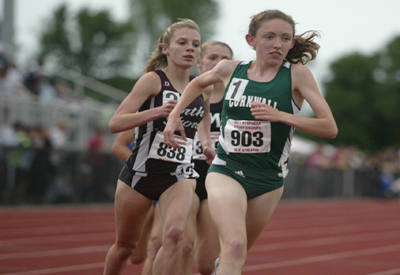 Aisling Cuffe breaks 10 for 2 miles: This race was special because it epitomized everything that Aisling Cuffe is as a runner. She studies. Cuffe knew that Kayla Beattie of Woodstock (Ill.) would decide a quick pace. She when to take over the race and she kept pushing the pace until she had separated herself from the entire field.  Cuffe sealed herself has the greatest distance runner in New York State history, one of the best scholastic runners the country’s ever known. She broke the national 2-mile record and became the first high school girl to break 10 minutes. But Cuffe couldn’t help thinking about how failed to break the national 3,200 en route. Indoors, Cuffe became the second girl in US history break 10 minutes the indoor 2-mile, running 9:56.85 and missing the national record by less than a second.

Bronxville’s 4x800 National Championship: Three freshmen. One sophomore. And one national championship. The Broncos proved that Mary Cain isn’t the only fearsome youngster on their squad. Sophomore Meredith Rizzo (2:13.35) and freshman Courtney Campbell (2:14.02), Emilie Hoffer (2:18.75) and Cain (2:03.74) set the fourth fastest time in United States history while thrilling the crowd at the New Balance Outdoor Nationals, coming away with the gold in 8:49.85. Bronxville coach Jim Mitchell has made the Broncos a factory of fearsome, if not competitive, 4x800 relays, but none greater than this upper classmen-less group.

Zavon Watkins breaks 1:50: The junior became just the eighth high school runner from New York to break 1:50 outdoors when he finished second at nationals in 1:49.70. No one had done it since Lubert Lewis of Rome Free Academy dipped under in 1997. Before that, it was Suffern’s Jeff Van Wie, who set the state record (1:48.56) in 1983. Watkins spent a fair part of the season hoping to prove that he was also a formidable miler but when ever he took the track in the 800 the chance for a sub-1:50 effort was always looming. Watkins joined that elite club in his final race of the season, making his customary mad dash with 300 meters left, although it wasn’t enough to chance eventual national champ Austin Mudd (Mo.).

Girls 1500 at NYS Meet: I have a personal attachment to this one because, well, to be honest, I advocated for it the best I could. It was like a distance runner royal rumble. It was the main event. The headliner. Probably one of the most stacked races of any state meet anywhere. Aisling Cuffe, Samantha Nadel, Courtney Chapman, Kelsey Margey and Rachel Paul. And here comes Bronxville freshman Mary Cain, who turned what should have been a toss up into the most dominant performance of the season. Cain never trailed. Not for a step. She said she ran like she was “being chased by jaguars,” and set the state record in 4:17.84, the national freshman class record and the seventh-fastest perfomance in U.S. history. Cuffe finished in 4:19.83 and Chapman of Fayetteville-Manilus clocked 4:23.01. The top three times were faster than Cain’s 4:23.1 state record set earlier in the season. In fact, the top six girls ran under 4:30. Paul of Sachem East clocked 4:27.88, which in most years wins the state championship or earns no less than second. Paul finished sixth. That’s how good the field was. That’s how great the race was. 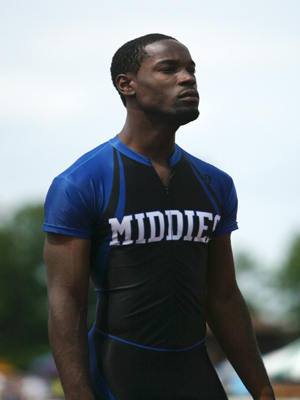 Mel Mosley goes 46.88: The thing that stood out about this race is it really came from nowhere. Grant, Middletown’s Mosley made it clear that he believed he could run 46 seconds and he would leave the track angry if he won a race in 47. He had come off a race where lost to Monroe-Woodbury’s Ryan Brennan, who posted the then-state leader at 47.75. Brennan’s time ironically tied Mosley’s personal best at the time. But the next week at the Section 9 Class A-D Champs, Mosley popped 46.88, becoming just one of two runners to clock a 46-second quarter-miler since Elize Coleman of Newburgh set the state record at 45.94 in 2004. Mosley, who is headed to Southern University, went on to lead the Middies to the national title in the 4x400.


Note: The day that Brennan beat Mosley at the OCIAA championships, he clocked 47.75 and then ran 1:51.62 to win the 800. It was probably the most impressive double by anyone in the state during the season.


Mary Kate Anselimini’s National Record: Anselmini was already the defending national champion and already favored to repeat. She was in the middle of the best season of her high school career, all while coming off a foot injury. But she pushed a solo run at the Section 11 state qualifier at Port Jefferson into what was, at the time, the fastest 2,000-meter steeplechase in United States history. Anselimini clocked 6:33.01, and the way she ran started talk that she might be able to break 6:30. Anselmini later won the state championship and repeated as national champ but saw her record fall at the World Youth Trials when Maddie Myers (Wash.) clocked 6:32.02 and then lowered the mark at the World Youth Championships in 6:29.20.

Lateisha Philson breaks NYS Junior Record: Philson was barely a part of the spring track season but whenever she showed up, she made her presence known. Despite only competing at the Loucks Games and the PSAL Championships, the junior led the state in the 100 hurdles and clocked 11.92 in the flat 100 meters, which ranked third in the state. But when the school season ended Philson really made a slash at the World Youth Trials, clocking 13.69 to finish third in the final and break the state junior class record. Philson battled a hamstring injury all season that kept her race schedule cautious, at best. But once she got approval from her doctor before raced in South Carolina, it gave Philson all the confidence she needed to run hard to the finish and prove that Philson is among the best hurdlers in the nation.

Sancho Barrett breaks 14 seconds: The truth is that every year the top tier hurdlers around the country break 14 seconds routinely. But that doesn’t happen much around here. Whether it’s the weather or availability to train properly, the hurdling royalty of New York are but a chosen few. And even though don’t always see the under side of 14 seconds. Amityville senior Sancho Barrett clocked 13.98 at the Section 11 championships in a season where he dominated the hurdles throughout. Barrett, who signed to Penn State, started the season hoping to recover from a hamstring injury that forced him out of the indoor state meet. He went undefeated on his way to defending his state title in the 110 hurdles in June.