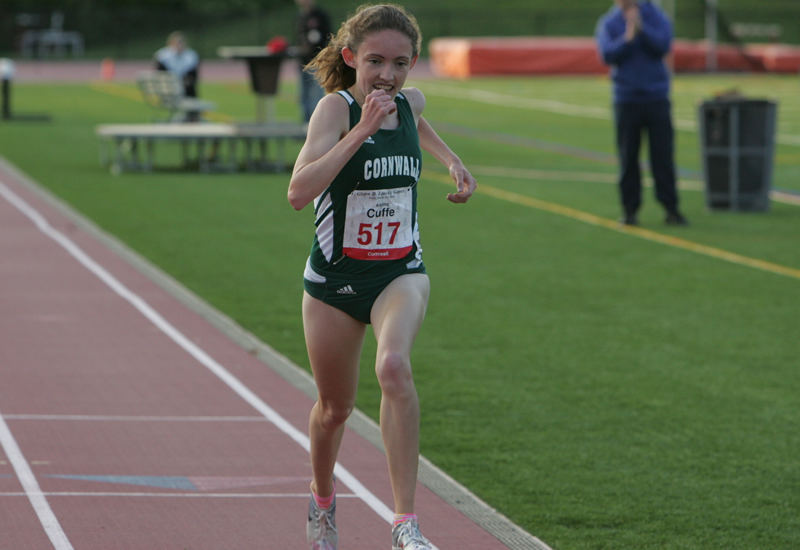 
She also squeezed a couple rounds of Clue and accepted two separate challenges to play Ultimate Frisbee next week.


Cornwall superstar senior did all that in school. Then she went to White Plains and broke a New York State record.


Cuffe built her lead after two laps and made a solo chase on the record on a night designed for distance running. But the state record  was only a formality for Cuffe, who is already looking ahead.


“I’m really looking at the big picture,” Cuffe said. “I’m looking forward to the national record. I feel like my time is running. I have less than two months left. This is my last Loucks Games.”


Cuffe went out in 72-second first lap, then six laps at 75 before she closed in with a 71 final circuit. She considered it a bounce back race after she finished second of Haley Pierce of Tatnall (Del.) at the Penn Relays two weeks ago when Cuffe said the state record in the 3,000 (9:19.24).  She said reading stories about the race on websites only reminded of what she considered an off-race.


“It helps a little,” she said of Friday’s victory. “It’s just to get out there and remind myself that I still got it. You know, in my old age.”


Cardozo’s Claudia Francis also handled the pacing duties solo, leading start-to-finish in the 800. Francis, who is signed with Oregon, won in 2:08.21, the second-fastest time in the state this season for the two-time defending outdoor national champ. In the same race, eighth-grader Emma Gallagher finished third in an astounding 2:10.80.


“I have to do better,” she said. “Everybody else is running so fast.”


Francis has shown the most speed of her entire career this season, posting the state’s second-fastest 400 time and clocking a 53.5 split at Penn Relays. But Francis makes her name at 800 meters, where Bronxville’s Mary Cain, who set the freshman class 3,000 record at Warwick’s Friendship Invitational, currently holds the state leader.


“I should have gotten out faster but it didn’t quite work out,” Francis said. “It was ok. It’s a win. I’ll take it.”


Holy Names senior Klarissa Ricks continued her outstanding season, winning the long jump in 18 feet, 10.50 inches. She won the event on her last attempt, snatching the lead away from Cornwall junior Brittany Bryant, who finished second in a career-best 18-5.25.


The Columbia University recruit earned the biggest win of her career at the Penn Relays were she cleared a state-leading 19-10.75.


“It definitely raises the bar,” Ricks said. “Winning something like Penn, where only the best Americans or the Jamaicans win, it was something that I didn’t really think I’d get to.”


Beacon’s Victoria Alexander rebounded from a subpar effort in the long jump to win the 100 in 12.11. Alexander tracked down Cardozo’s Lateisha Philson, who blew everyone away off the start. Philson finished second in 12.19.


“My start wasn’t really awesome,” said Alexander, who is headed to Northeastern. “But I knew I just had to keep pushing harder. Once I got the lead I just wanted to keep it.”