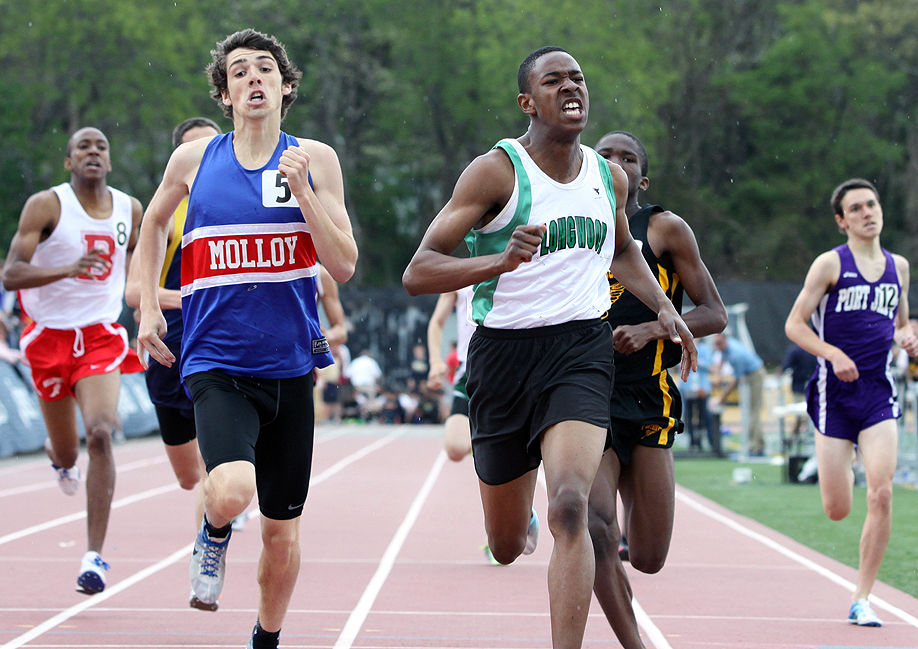 
HUNTINGTON – As much as Owen Skeete had built a reputation for front-running, he has built the same reputation for crumbling once the field reeled him in.


Dispelling that reputation had been the biggest difference for the Westbury senior this season. Skeete did what he always does Saturday, he bolted out to a huge lead in the 1,600 at the St. Anthony’s Invitational. But this time, when Chaminade’s Matthew Woop and later Tim Odin of Northport took shots at him to snatch the lead, Skeete refused to let either of them wrestle it away.


Longwood senior Joe Fuller (pictured above) showed the same fight in a hot race in the 800. He won in 1:53.85, the third-best time in New York this season.


Fuller laid back while Seitu Solomon of St. John the Baptist towed the field through the first quarter-mile in 54 seconds. But the field gobbled him with 200 left. Patrick Cooney of Molloy and St. Anthony’s Payton Hazzard both following Fuller’s move.


“The last 200 I just knew I had to go,” said Fuller, who set a three-second personal best. “I saw the kid from (Molloy) making a move and I knew I had to push it.”


“This feels really good,” Fuller said. “I want to bring that time down. There’s a lot of time left in the season.


Chaminade’s Thomas Awad blew open the 3,200 with 1100 meters left. He made a decisive move with two and a half laps to go. The move was bold enough that no one followed at first. But Awad started to labor on the bell lap and Alex Saavedra of Sachem East smelled it and went after the leader.


Saavedra pulled even with Awad on the home stretch, which was enough to wake up Chaminade’s junior front runner, who responded with his own surge. Awad won in 9:23.73. Saavedra was second in 9:24.20.


Southhampton’s Owen Laub posted a season-best to win the 400 meters in 49.17. The senior pulled past Raphel Rother of Bay Shore in the stretch to earn the victory. Rother stopped the clock in second in at 45.35. Laub appeared behind at the start but he realized he was trailing with 200 left and started to push.


“I didn’t’ even know I could catch them on the straightaway,” Laub said. “They were so far ahead. It was tough. That wasn’t even me running a good race. That was just training and practices and weight lifting. That’s all that was.”