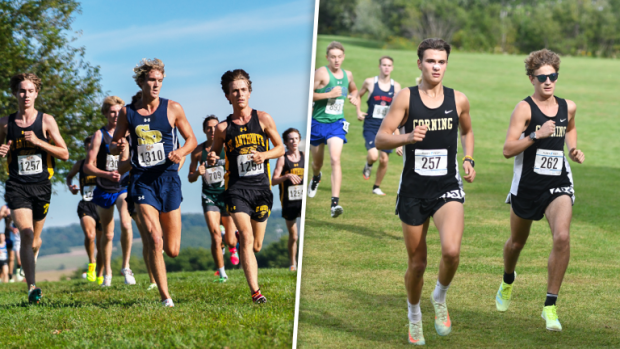 It's only opening weekend, but the cross country season is developing right before our eyes. Heading into the Season, one thing was clear. There was one team ahead of the pack, with the rest of the State looking to develop new talent. Corning was the reigning State Champs, and brought back 5 of their Top 7. However, after Week 1, another name has emerged looking to change the pecking order. Saint Anthony's ventured abroad to capture a early win to make a statement. Both teams have experience making Team Cross Nationals, with St. A's doing so in 2014 and Corning matching in 2017, but neither have won the Regional. In a year of full return from COVID protocols, that looks to change. We break down what happened below.

The Pre-Season NY-1 team Corning opened up at the Pre-State Invitational. As expected, the Hawks had a 50-point gap over the rest of the field come the merge. Their entire top 5 consisted of seniors, a good trend for boys teams looking to compete at the State and National level. The section 4 squad finished with a 17-second compression, which is a lot tighter than would be expected based on the previous year. However, they raced during the warmest point in the day, and there was some effect on the times.

With the Catholic State Meet at Van Cortlandt Park, no need to head upstate to race at VVS for the boys of Saint Anthony's. Instead, they headed across State borders over to Pennsylvania, to take on a challenging course at Kutztown. Ranked at NY-4 heading into the Season, their strengths were apparent on paper. A senior heavy team, with a Speed rating gap of only ten points, and a 10-flat average for their five returners over 3200m on the track (Corning had 9:38 by comparison).

Those strengths played out on the course in PA, as the team finished with an 11-second compression, their lead runner moving up to a 170-SR best. The improvement scored them a 30-point win, and a second look as potential State Leaders. With their ratings pushed over to the VVS merge, they would win the meet 67-72 over Corning.

The next round of State Rankings won't come out until deep into September. It allows all teams to shake off the cobwebs, and all teams the chance to run with full squads. This years Pre-State Invite was the earliest it had been in years, and the times typically in debut performances were affected (just look at the Girls Meet.)

So what do we do?

It's clear there are two favorites for the crown, coincidently the same amount of teams to be sent to Team Cross Nationals from the New York Region. Saint Anthony's may have the edge currently, but Corning has the history. We've seen them come on in the end of the season, last year specifically, where Ashton Bange became the top returner in the State based on Chenango Valley results. Its down to a toss-up until the pair race head-to-head.

Luckily, we won't have to wait long, as both teams are currently listed for the Manhattan Invitational. With their strength, and continued improvement, both teams will be looking to claim their first ever Eastern States Team Title. A New York Team hasn't won the title since 2014, and with this being the 50th Anniversary, they'll face strong competition from CBA of NJ, as well as Union Catholic. However, both teams proved capable this weekend, and we can't wait for VCP.