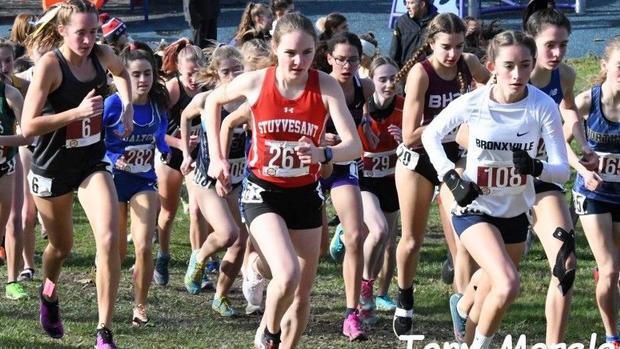 While most of NY's high school XC conferences had returned to fairly normal operations by last fall, NYC's public school teams in the PSAL conference were still taking the first tentative steps back from the zero-activity 2020 pandemic times. Even the schools that were able to field enough runners to compete were faced with keeping up spirits for athletes who were not allowed to compete in any open invitational meets (the solitary Marty Lewis invite was a PSAL-only event) and were not allowed to leave the city to run except at the Federation championship. So yes, the PSAL gets some extra allowances for the teams selected to be previewed here.

But a championship was held in 2021, and some of the top teams were back in action. Brooklyn Tech had enough runners back to win a repeat championship from 2019. And a few runners who should have been having their glory days returned last year as seniors Farah Osman and Susan Jimenez of Brooklyn Tech and Chloe Isip of Millennium \ John Jay Campus paid farewell to PSAL runs in a very nice fashion. Of the top teams listed in the 2019 previews, only Brooklyn Tech was still around to contend in 2021, though by last year Millennium had evolved into a group that would be known as John Jay Campus in Brooklyn.

For the record, it was Stuyvesant's Isabella Stenhouse who took the crown in the 2021 race, and she was followed in 48 seconds later by BT's Osman. But the Engineers again had too much depth to be denied, and BT won the team title by 48-84-107-116 over Stuyvesant, Hunter, and Beacon School.

Reigning champ Brooklyn Tech's top two runners Farah Osman and Susan Jimenez were seniors, so naturally we should need to be kissing them off as contenders in 2022. Except, the Engineers always have more runners coming up, and returners Danielle Andrews, Michelle Lipski, Simone Contreras, and Roxanne Buchana all finished in the top 20, so BT is aiming at a three-peat. Stuyvesant behind champ Isabella Stenhouse have top ratings, but the Peglegs need more depth and development. Hunter has a youth movement going on behind NYSAIS #4 Rebecca Sonn-Lees, but more depth is needed. Tottenville could also be in the mix if it can fill out the back of the lineup. On Marathon Sunday morning, all will be revealed.

Isabella Stenhouse is the reigning PSAL champ, and New Dorp's Rylee Ferretti has top ratings based on races outside of her school's standard meets. Again, it is hard to predict how this year will turn out, but Stenhouse and Ferretti are well above the other PSAL runners. Ferretti ran in a few track meets associated with New Dorp, and considering the murky circumstances for the PSAL in 2021, we are inserting her as one of the two favorites for the 2022 title. The PSAL also had a Varsity race at the championship for runners on teams that did not qualify for the Championship race, and it was won be Esther Luo of Riverdale Kingsbridge.