The late Larry Byrne (above), who served as the in-house meet announcer that day, wrote in 2013 that Cox Cage, Yale's indoor facility, was a cathedral-like edifice and the booth from which he called the race was actually a pulpit, some 10 feet high above lane four of the four-lane oval. He had the perfect view of what would unfold that day, perched above the beginning of the back straightaway. The track was brand new. The 1983 Yale Invitational was the first major meet on Yale's new Elis' "tuned" 200m-flat synthetic track. And boy did it serve its purpose.

Mike Stahr, Miles Irish, and Charlie Marsala all knew who they were up against in that race at Yale. Steve Kittredge (Manchester East, CT), who would go on to finish 4th in his own State Record, had no idea what was coming.

The trio certainly seemed to show the proper reverence for the venue and respect for each other. Stahr was considered the favorite heading in but not by much.

"Millrose Mike could go from a 60-second pace to a 50-second pace in three strides," Irish said. "Mike had a step and he was gone. He was formidable. The people that know that era know that. There are very few high school stars of today that could get one over on Mike. He was savvy, he had intensity and he was unbelievably committed. He was very adept on the smaller tracks, especially the banks.

"I don't remember any buildup to that race, though. I know my fitness was at a high, possibly the most fit I have been in my entire life. I was just young and over enthusiastic, which would not have been unlike me at the time."

While the trio had no way of knowing what was about to unfold, they had raced against each other often enough to have an idea of what to expect. Or so Marsala and Stahr thought. Irish's "over enthusiasm" certainly came into play when he did something he didn't usually do - he exploded off the line, surprising the field, particularly Stahr.

"Miles did something unlike Miles," Stahr said. "He took off; he just sprung out and at that point, it dawned on me that he was serious. My style of racing was always to go to the front and battle. I remember Marsala passing me [early], and that was fine, but I thought Miles would come back and the sucker never did. It was just a weird day." 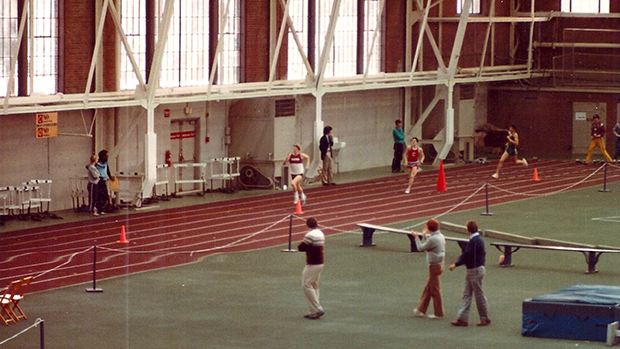 Miles leads Stahr and Marsala at 75m into the race

Irish, however, can't recall if his decision to go hard early was part of a predetermined plan between him and Richard Stevens, his coach. Stevens says he can still remember the race vividly but was also unsure if there was any conversation about a quick start.

"When he drew the outside lane, it kind of told you that you had to go harder than you might have otherwise," Stevens said. "I might have said something about taking advantage of that outside lane. And he looked like he was 30 yards ahead of Stahr before the gun even went off. He put in some unbelievable fractions. Marsala got in Stahr's way after that and that hindered his chance to catch Miles."

"At this point, Stahr began his frantic kick over the final 85 meters in an effort to overtake the now noticeably tiring Irish, who managed to breast the tape just a scant meter ahead of Mike," Byrne wrote.

"I never looked backwards in my life so I was just looking toward the finish line," Irish said. "If you look at the times [after the 800] I still had a lot of daylight between me and Mike. But Mike was charging hard. My last lap was 29 something and Mike's was in the low 27s. It was dramatically faster than mine.

"I couldn't have responded if Mike had pulled side by side with 20 meters left. There would have been no response. Had that race been two yards further, I assume Mike would have won. I was staggering. I was done. I caught him napping. I'm glad he took his time."

Stahr recalled his father screaming at him from the stands to "please wake up" as the last lap approached, shocked that his son was so far behind. The Carmel speedster also snapped back as the final lap unfolded, realizing that he had better make a move.

"I just took off after Miles and I couldn't quite catch him," Stahr said. "He was just ahead of me at the end. It was an amazing race he ran and Marsala, too. Miles didn't run from behind, he was pushing the whole time."

While Irish admits that he was gassed as the race drew to a close, Stevens believes that if he hadn't tightened up physically, Irish would have had an even better finishing time.

"I was on that first turn hollering stay loose," Stevens said. "He had a tendency to pick up his shoulders when he was exerting like that and he couldn't help but pick up his shoulders on that last lap. Probably if I had another year to work with him I would have smoothed some of that out and he would have had some better finishes. Still, his times weren't anything to sneeze at."

Marsla also had a perfect view of what was unfolding. He was in second place for much of the race until Stahr passed him with two laps remaining. Marsala said he was surprised Stahr didn't stay on Irish from the outset, adding that if he did, he probably would have won.

"It was always tough when Mike and Miles were there," Marsala said. "At that time no one could touch Mike but he hung back and Miles went. When you look back at it, I broke a national record but two guys happened to finish in front of me. It doesn't really bother me, though." 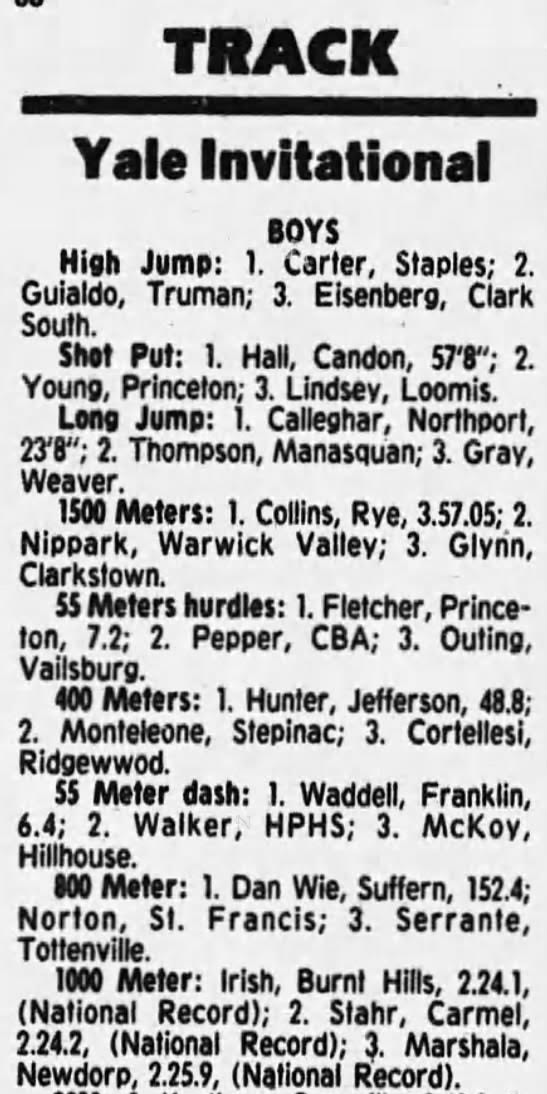 The race made an impact on both the crowd, and the media. There was one athlete on the sidelines, who didn't regret choosing another event that day.

"That race was loaded with Miles and Mike, and Charlie was there, too," Van Wie said. "Everyone was pushing each other. That track was also something they had never experienced before. We ran at The Armory, which was essentially a gym floor with a railing. With that surface [at Yale], you knew they were going to go fast.

"I remember watching it. It was a very physical race between Miles and Mike. I never wished I was in that one. I'm not the kind of runner who responds well to getting knocked around a bunch. It would have been terrible to be in that mix. I weighed much less than both of them so I was glad where I was at." 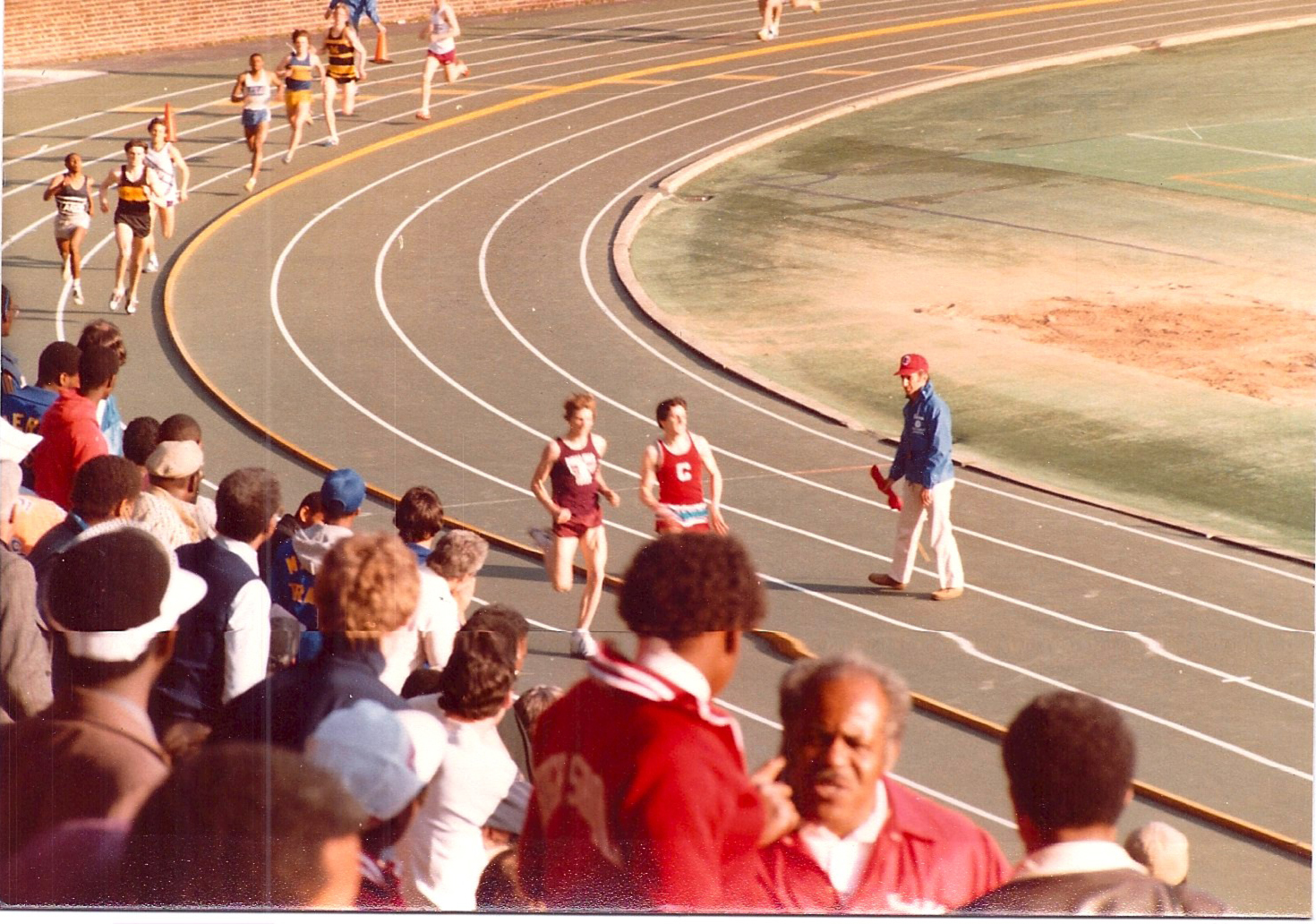 Miles and Mike would have another (of many rematches) at Penn Relays that Spring, a track they would return to as teammates later, setting the DMR World Record.