Two weeks removed from her record run in Rhode Island, Katelyn Tuohy (North Rockland) was once again pushing full throttle.  In the second of her planned "all out efforts" of the season, Tuohy broke one of the most storied course records left to grab in the Northeast. Heading to the neighboring Garden State of New Jersey, she took down the Holdmel course record by over a minute, completing the 5K distance in 16:21.

The course at Holmdel differs in topography than that of Ocean State. Decidedly less flat, the first mile consists of a gradual climb, where you then meet "The Bowl." Tuohy crested that first mile in 5:23.  Comparatively, when Edward Cheserek broke the boys course record in 2011 with a 14:53, he did the same distance at 5:02. Tuohy continued her attack on the clock, crossing the 2-Mile at 10:46.  From there, it was a downhill push, to the finishing straight. The record was well within reach on the finish chute, yet, Tuohy pushed through the line, crossing in 16:21. Tuohy's last mile would have been 5:05, allotting 30 seconds for the last 160m to round out to 5K.

The previous girls record was held by Megan Venables (Highland Regional, NJ) at 17:27.9, set back in 2011. Later that year, Venables would go on to place fith at Foot Locker. Other notable names include NXN champion Ashley Higginson, at ninth All-Time, and Foot Locker winner Janet Smith, with a 17:35.3 in 1983, good for Holmdel No. 2.

Tuohy beat them all by over a minute.

Tuohy ended up just under 1min and 30 seconds behind Cheserek's course record. That margin is generally accepted as the average time between male and female distance running equivalence. For perspective, Amber Trotter was 1 minute and 34 seconds slower than the boys Foot Locker winner in 2001--in what was largely considered the best female cross country performance of all-time. That would mean, in theory, Tuohy is to female distance running as to what Cheserek was to male distance running.

In fact, only 164 boys in history have ever broken 16 minutes at Holdmel. Tuohy was only 21 seconds off.  Tuohy would have finished 17th in the Boys Meet Merge.

Tuohy's Speed Rating of 176 at Ocean State projected she would run about a 16:23 at Holmdel, based on the adjusted speed ratings from the same meet last year. What rating she earns this year will be determined by the quality of the field in the middle third, but it's safe to say the Ocean State race was no fluke.

Tuohy is set to race the New York state course next week, forgoing the Manhattan Invitational. It is meant only to be a course run-through, and not an "all out effort" as these past two races had been planned. Past that, Tuohy is expected to see Bowdoin Park at least twice more before the end of the season, with a third time coming with the decision of Foot Locker versus NXN.  Regardless, we're sure to see her at full strength once again before States and Nationals, so those course records better beware!

Because Katelyn Tuohy smashed the Holmdel Park course record by an amazing amount, I'm starting this with a brief explanation of her speed rating of 177.0 ... Based on previous year's results at Holmdel,  Katelyn Tuohy race time of 16:21 would have been a speed rating of approximately 180 ... BUT for what ever reason, Holmdel on this particular day ran exceptionally fast ... Not just for Katelyn Tuohy, but for the vast majority of runners ... Speed ratings compare runner-to-runners and not runners-to-courses ... time differences between runners are the key factor.

I use graphs as part of my evaluation process ... the graph below depicts the raw data that compares the Shore Coaches' race in 2018 to 2017 ... It is obvious from the graph that the races (merged varsity races) were faster overall in 2018 compared to 2017 ... the graph can be  used to approximate that for this race, Holmdel ran roughly 12-14 seconds faster in 2018 than in 2017 (when the race was a normal fast race in inherent speed for Holmdel).

This is just the first part of the speed rating process ... the next part, totally separate from the graph, compares this season's speed ratings for individuals to all other individuals (in the top 50-60% of finishers) with their finishing times and time differences between each other and derives a fitted race adjustment to calculate the speed ratings ... This derivation indicated that Holmdel ran 9-10 seconds faster in 2018 than in 2017 ... and those fitted speed ratings (based on individuals) were used to derive the speed ratings below ... the margin of error is fairly low and I am confident in the result. 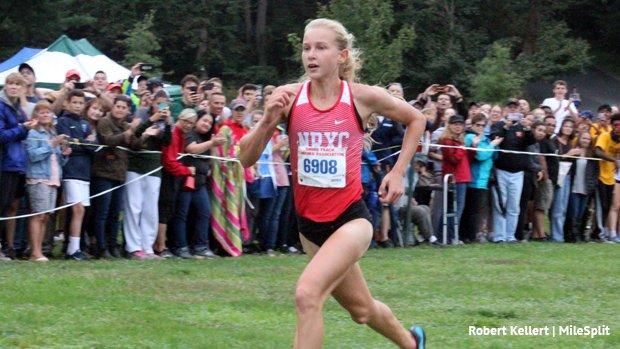