There were some questions on how Katelyn Tuohy (North Rockland) might follow up what may have been the greatest Prep XC Campaign ever, last year.  If her performance at the Ocean State Invitational in Rhode Island is any indication, we haven't seen anything yet.

Tuohy opened her season earlier in the year at the Red Raider Run, using the meet as a team building opportunity.  She paced her teammate, Haleigh Morales, to a second place finish, but never truly exerting herself. But this meet was uncharted territory.

Coach Brian Diglio specifically crafted a schedule that would avoid comparisons to last year, so that she wasn't simply chasing her own course records.  That will be unavoidable later in the season, as Bowdoin Park is Section 1's gateway to the State Meet.  But for now, the Ocean State Invite in RI, and the Shore Coaches Invite in NJ, were marked off to be two hard efforts in the Invitational portion of the season.  Well, today, we got to see just what a "hard effort" meant.

Tuohy got out hard from the gun, cresting the first mile in 4:56.  An incredible feat on the track, let alone an XC course.  Goddard Park isn't known to be a hilly course, but it is still on a mix of grass and gravel.  After that mile, there was some slowdown.  Tuohy would then have to average 5:25 for the next two miles to come to her final finish time. In the past, many early season meets were used as workouts, however, this was an all out effort, one of a select few.  Regardless, Tuohy would cross the line at 16:06.87, rounded up to 16:06.9. Looking briefly at the MileSplit database, it's the fastest full 5K ever run by a High School in XC, better the previous mark set by 2015 NXN Champ Katie Rainsberger, who ran 16:23.4 at the Desert Twilight XC Festival.  It also bettered the course record set last year by Kelsey Chmiel (Saratoga), who ran 17:35.0.  At the time, she was the only New Yorker to ever break 18mins on the course.

What Does That Mean?

The performance is nothing short of incredible.  The highest rated performance by Speed Rating was Amber Trotter's Foot Locker win in 2001 at an even 180.  Tuohy was rated today at a 175.71. It's the third fastest Speed Rating ever recorded.  The other two serve as the course records for both Foot Locker locations (Trotter's 180 was at Orlando, while Melody Fairchild's Balboa Course Record was rated at 177.9)

That number is significant.  Not only because of how high it is, but how it was achieved.  Tuohy ran the race entirely solo, more than two minutes ahead of second place.  In essence, it was a time trial, with uneven pacing.  Speed Ratings at Foot Locker are generally inflated because of the quality of the field.  Trotter had some company for the early goings of that race.  Tuohy didn't have that luxury.

Looking on the boys side of the competition, Matt Payamps of Saint Anthony's took home the Boys Championship Title.  His winning time?  15:49.79.  Second place in that race belonged to Sam Toolin (North Kingstown, RI), in a time of 16:07.53.  Yes, you read that correct, Tuohy would have taken second in the Boys Race.  Toolin is no slouch.  He's run 4:13 for the full mile, as well as 1:55 for the 800m. And Tuohy was able to time trial faster.

What made Tuohy's season last year so special, was not only what she was able to do at the Championship level, but that she was able to do it consistently.  Her peaking was incredible, yes, but even her base-phase efforts were Record Breaking.  And if this effort is any indication, she'll do just fine this season.

And heck, there is still another year after that. 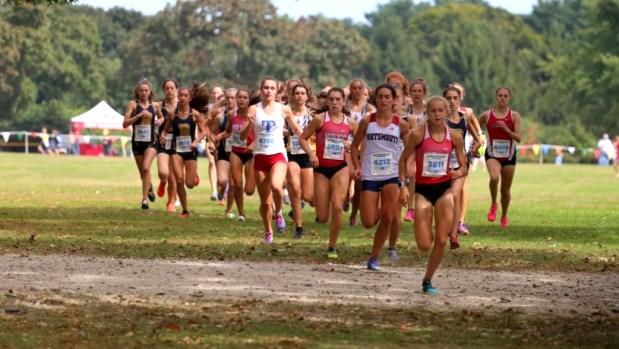