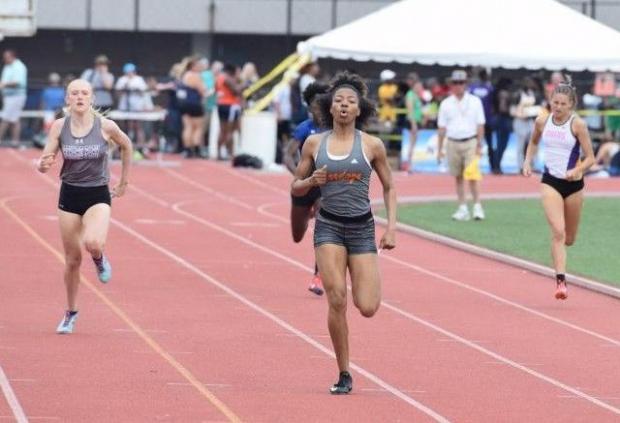 Paris Peoples won the 400 meters at States with Jenna Crean (left) in 2nd.

There are six marks for the NY T&F girls in the Trackathlon Showdown that rated a plus 1100 score according to the IAAF tables. Five were marks in distance races and four were done during the indoor season. As previously mentioned, one of the 1100+ marks came from Erica Ellis for a win at the Akron Pole Vault Convention in January, her single result for the year. In addition, a certain top runner in the nation had four more marks above the 1100 level that were bettered by another race she did for her top mark in either the 1500 or 3000 during the two track seasons. 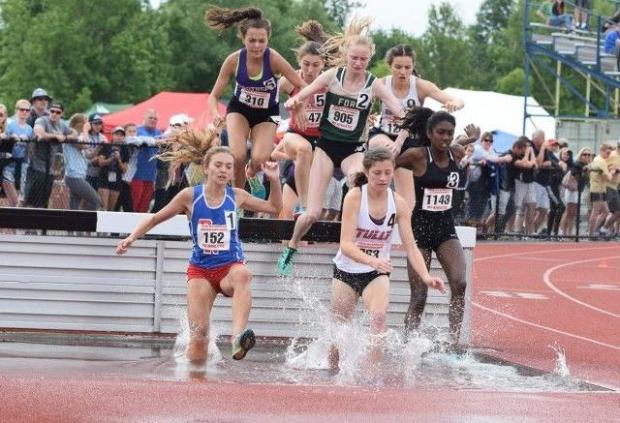 Seven of the TS contestants got their top score from the steeplechase and most were in the championship 2K SC at States, including from left to right, Mary Borkoski, Olivia Morganti, Haleigh Morales, Sarah Trainor, Brooke Rauber, Aziza Chigatayeva (States champ), and Kaitlyn Chandrika.

Another distance runner who had a big year with her world XC title in Edinburgh and 2nd at NXN and who also tallied an 1100+ plus mark on the way to the second-best Big 3 score was Kelsey Chmiel. We couldn't put together an indoor or outdoor triathlon score for Chmiel since she concentrated on the general 1500 and 3000 distances during the track seasons only, but her 1113 score in the 3000 was converted from her 2 Mile run to 2nd place at NBN indoor. Chmiel's other big scores came from the 1500 conversion of her Millrose Mile 2nd place for 1083, and her 3000 conversion from her 2 Mile race at NBN outdoor.

Lanae-Tava Thomas managed to break up the distance runner stranglehold at the top of the ratings with three 1000+ scores to take 4th in the Big 3 score. Tops for Thomas was a 60 meter win at the Spire Scholastic Showcase in February, her 21-8 indoor leap at the Section 5\6 Battle of the West, and her win in the 100 finals at States that netted her 1020. And though she was a little further back at #13 in the pentathlon rankings, Thomas also represented well for those all-around workhorses with a win in the event at the Monroe County Championships. 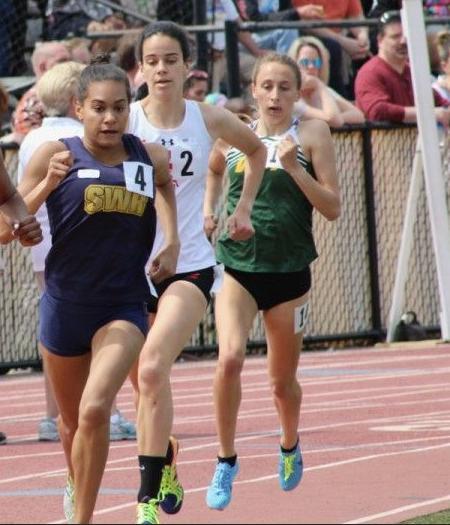 Katherine Lee wrapped up a storied career with another strong season to
take 4th in the Big 3 scoring. She is followed most closely here by fellow
contestant Ellen Byrnes at the St. Anthony's Invite.

Leading off the rest of the top 10 finishers in the Big 3 scoring was Katherine Lee, finishing 5th with an especially big effort in the indoor 1500 converted from her 3rd place time in the Mile at NBN. Freshman Brooke Rauber was close behind in 6th place led by a 1044 from a 1st place finish in the 1500 at the Eddy Games. Reilly Siebert picked up the 7th spot with the big help of a 1053 score she got for taking 2nd in the 1500 at States in June.

Rounding out the top 10 were naturally three more distance runners. Sarah Trainor was 8th and her biggest mark at 1020 came from the conversion of 2nd place in the steeplechase at NBN. Caroline Timm was 9th fueled by her 4th place in the States outdoor 1500 for 1047 points. 10th place went to Abigail Spiers who had no scores in the 1000s but had three scores in the high 900s led by 998 from a win in the outdoor 3000 at the Shenendehowa Invite, and she also got help from a 2nd place finish in the 5000 at outdoor NBN. 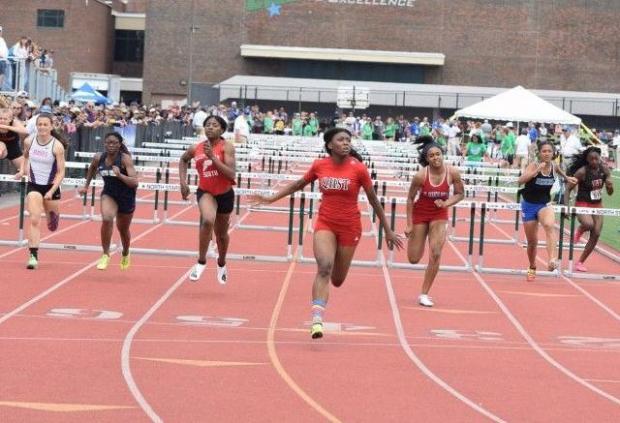 Sophia Myers led the hurdling contingent at States and finished 18th in the Big 3 scoring with big marks in her high hurdles specialty.

Because of the high marks racked up by NY's distance runners, the rest of the T&F athletes are at a disadvantage in the scoring comparisons, and maybe a Fieldathlon confined to the jumps and weight events would be the only way to give the non-runners a fair shake. Having two chances for plush scores with the indoor and outdoor pole vault helped Alana Carroll and Kaeli Thompson do well though. Monique Hardy needs a third strong event to go with her big hammer and weight throw specialties, but she put up nice numbers. Outside of Lanae-Tava Thomas's long jumps, there wasn't enough oomph in the horizontal jumps for scores to grow there. Pentathletes led by state champ Alexandria Payne do a solid job, but the biggest scores are generated by having a specialty like the pole vault that is well rewarded in the scoring tables.

Among the runners at shorter distances, Toshel Goffe with 2nds to Thomas in the States indoor 300 and outdoor 100 finished 13th in the Big 3 and leads the returning sprinters for next year. Jenna Crean also returns next year and was 17th in the Big 3 with States places that included a 3rd in the 55 and 4th in the 300 indoors and a pair of 2nds in the 200 and 400 outdoors. Sophia Myers has graduated but she had another huge year in the high hurdles and finished 18th in the Big 3.

A stripped-down more readable view of the the Trackathlon Showdown is shown below, followed by the more squinty-eye version that has the event info and indoor-outdoor scores packed in. Anyone on these charts had a very big year, and there are many more high-scoring athletes who could be added if we wanted to push the limits beyond 50. Cheers to all. 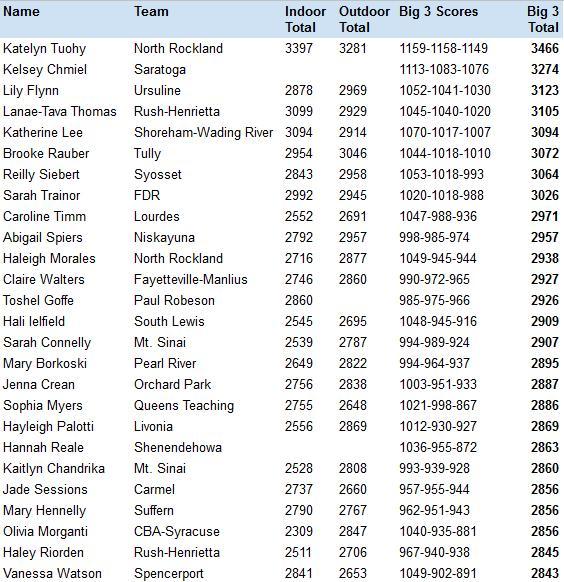 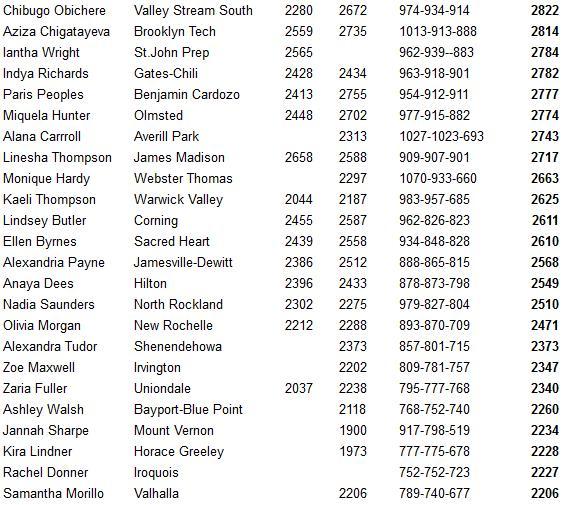 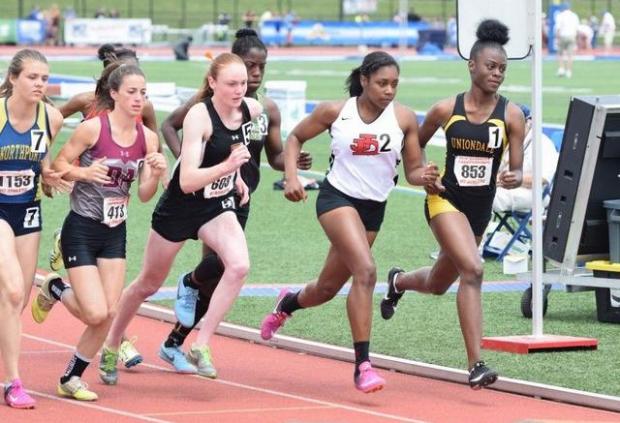 Perhaps nobody represents the T&F competitive spirit better than the pentathlon athletes, led out here at States on the final 800 by Zaria Fuller (hip 1) and Alexandria Payne (hip 2). 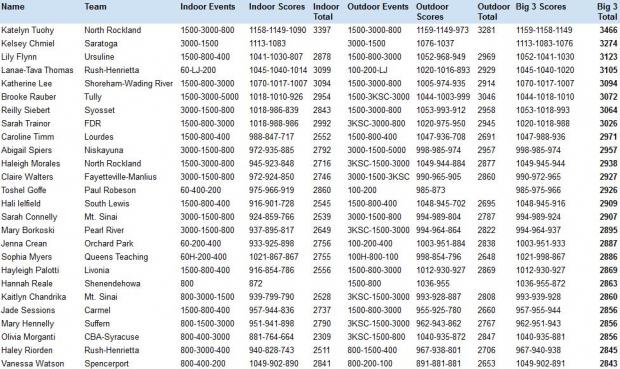 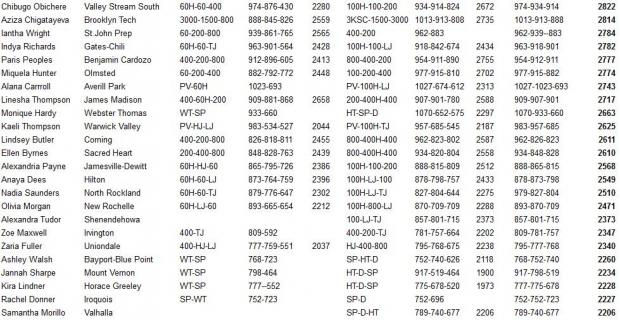 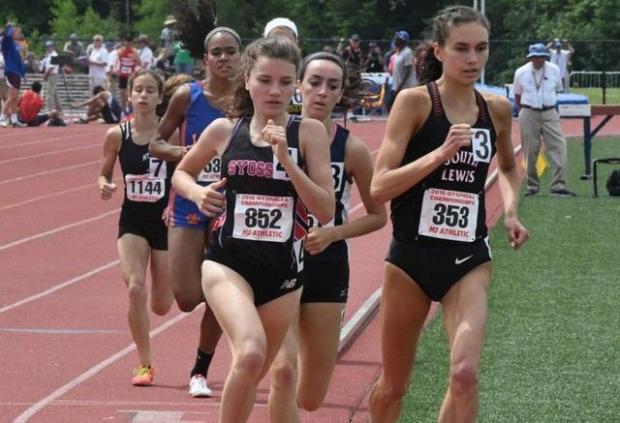