Katelyn Tuohy and Kelsey Chmiel went the distance atop the T&F leaderboards in 2018.

The athletes in the weight events had a free-ranging throwdown awhile back, and now it's time to bring everyone together in a showdown for all of the events. Or almost all of them, anyway, because the IAAF scoring tables do not recognize the race walkers. But the RW girls of spring know all about being left out of the States party once June rolls around in NY. In any case, we've got an Indoor Triathlon, Outdoor Triathlon, and Best 3 Triathlon trio of contests for the girls to swing into.

The NY athletes piled up a stupendous amount of top performances during 2018, and pulling out the best ones is no small challenge. But the big question is, how do you compare a 100 meter sprint to a 3000 meter run or a shot put heave to a long jump leap? Obviously the sprinter thinks the distance runner is painfully slow, and the shot putter knows she can make a toss that is way beyond where a long jumper can go.

In the T&F world we turn to the IAAF multievent scoring charts to decide how to compare marks from different events. The IAAF system is used in T&F competitions in the pentathlon, heptathlon, and decathlon, and they are also used for our Trackathlon Showdown (TS). The scales were set up decades ago based on the world records in the various events.

The table below lists the scores that were earned by the top performance in each event for the NY boys and girls during the outdoor season, with the weight throw from the indoor season tagged on at the end. The running events use the standard distance used by the IAAF, which for distance events is 1500 and 3000, and for the steeplechase is 3K. The times shown for the boys are converted from either the mile or 3200, and the girls steeplechase is converted from the normal 2K distance. 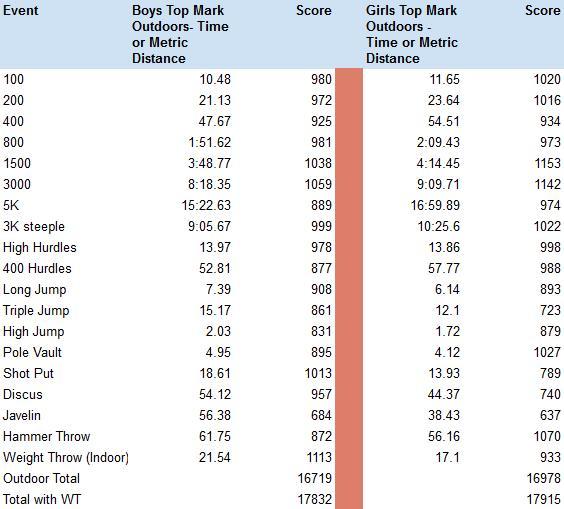 As can be seen there are a few events such as the javelin for both the boys and girls and also the triple jump for the girls that did not have a high ceiling for points this year as well as most others. The top girls posted higher scores than the boys in most of the running and hurdling events and vertical jumps, while the top guys scored better in most of the weight and horizontal jumping events. 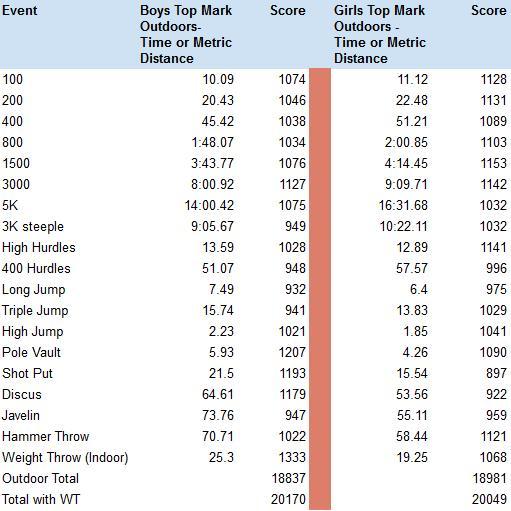 With a good chunk of the boring data stuff out of the way, we can get down to the nitty-gritty of how the Trackathlon Showdown is set up. I thought it would be a fairly clean and simple process to get the marks for the athletes and run out the scores for the contest. But everything about T&F is messy and hard, and the whole job here was much like running the 400 hurdles backwards with your coach running beside you yelling that you gotta go NOW.

First, the running distances stipulated in the IAAF tables are 100-200-400-800-1500-3000, with 60 substituted for 100 during the indoor season. Those distances work fine for the girls outdoors, but much less well for the girls indoor and the guys outdoor, and not at all for the guys indoor. So yes, there are a ton of conversions of times for the runners. If the contestants saw the TS data sheets, they would likely say, "I don't remember doing the 400 indoors, and I don't recall that time for me." Well of course not, but you did do either the 300 or 600, and your great times there earned you a nice score in the trackathlon.

Second, for the indoor season there is a lot of judgment calls about whether to assign a 300 time to the 200 or 400 slot, and it's the same issue for the 600 and 1000 times. I've used my judgment about whether an athlete is more of a sprinter or middle distance runner when selecting which event gets a conversion assigned to it. Since we're aiming for three scores for each season to get a triathlon best, we tried to be creative to help the fifty selected athletes fill out their score sheets. In essence though, the runners are being rated on a speed level they attained, not an actual time. Lanae-Tava Thomas captures the 100 at States.

Third, everything we measure is in feet and everything the IAAF uses is in meters. So Monique Hardy, you know that you threw a lot more than 56.16 feet in the hammer throw, and yes, that is what the metric world says your 184-3 foot heft equals in meters. Conversions galore, but very straightforward.

Fourth, for distance runners, there is that issue of the split times for 1500 or 3000 taken while running the the mile and 2 mile races at NBN Indoor. Though purists will shudder, I did the only fair thing and threw the actual splits out and used the slightly better conversion times. Kelsey Chmiel for instance has a nice enough split for the 3000 at NBN Indoor and it is cited as her best 3K time during the winter season. But she was still running the 2 mile, not the 3000 there, and she floored it during the last 200 while finishing 2nd to Katelyn Tuohy. The fair thing is to use a 2 mile conversion and not act like the actual 3000 time means anything.

Fifth, we have tried to pull in a diverse group of competitors for the Showdown. But some events like the horizontal jumps don't really get much of a score in relation to a decent sprint, so we have tried to make sure that all the T&F areas have some representatives at the expense maybe of including a few more distance runners. None of the six throwers included ventured outside of the weight events this year, and that gives them only two events for indoor season. The pole vaulters tend to specialize just in the PV, and Erica Ellis had just one mark all year, a spectacular 14-1.25 vault that scores 1108 points. But both Alana Carroll and Kaeli Thompson tried a few other events than the PV and both did very nicely at posting a Big 3 score. 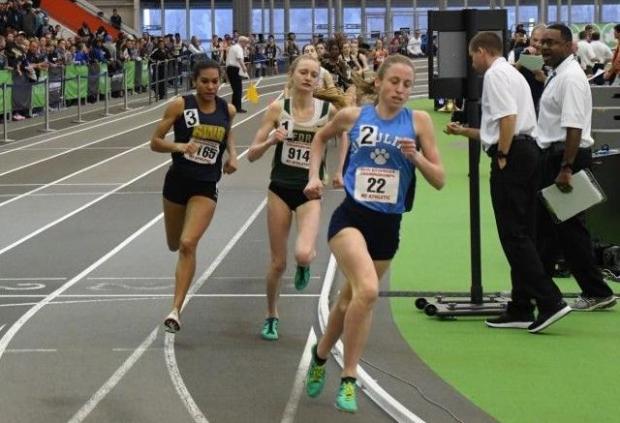 Lily Flynn led Katherine Lee and Sarah Trainor early on as she powered to the win in the 1000 at indoor States.

So on to the Trackathlon Showdown, which is really just another shameless jaunt down memory lane for the 2018 season that is lit up with a few stray pieces of data. Thanks again to the Cheshire County Athletic Association in the UK for its indispensable Ultra MultiEvents Scoring app.