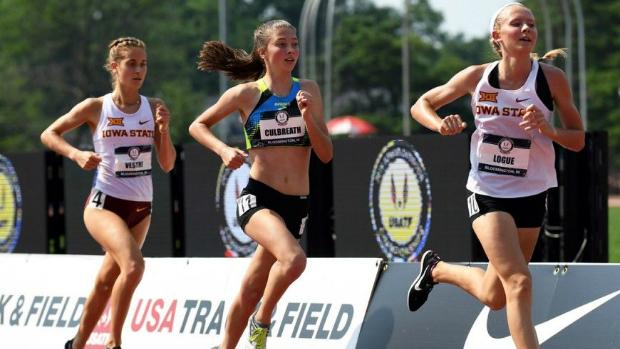 The following is a follow-up piece to a previous article we ran last year, A Coach's Take On His Athlete's Last High School Performance On The Track.

You can also read this article, which was also written with Vestri in mind.

This was followed up by taking a bronze medal in the 5K at the Big 12 indoor championship and a second bronze at the outdoor Conference Championships in the 10K.  Amanda then topped off her sensational freshman year by achieving a 4.0 GPA and earning a spot on Team USA which will compete in the IAAF U-20 World Championships in Finland.

But as impressive as Amanda's accomplishments are this season, they're even more impressive if you consider that as recently as her junior year in cross country, she was only the third fastest 11th grader in the Section V area. A glance at her Mile split Indoor 5K performances over the last two years is like looking at a statistical graph who's numbers are tumbling downward faster than a stock market crash.

Amanda Vestri is on the move, and not just on the track but also on national leader boards.  In fact, one could make a very strong case that the Webster (NY) grad may just be the most improved runner in the nation over the past two years.

So the question begs to be asked, what led to this monumental improvement?

The turning point came on January 30, 2016, running in a race where Amanda hoped to break her 3K PR--she clocked a disappointing 11:06. Frustrated, Amanda walked off the track and made a personal vow to recommit to the sport she so dearly loved.

"I just wasn't improving, I was actually getting slower as a junior." Amanda said.  "I told myself I would do whatever it takes to become the runner I wanted to be, from putting in extra work with coach Brunswick, doing morning swims and seeking out strength and performance enhancement coach Paul Dick, I was determined to make things change"

AND CHANGE THEY DID!

Starting from that pivotal point in her high school career, Amanda has been on a tear ever since. Just five months after running the disappointing 11:06, she would cap off her junior year at the state meet with a greatly improved 9:48.84. The following cross country season she once again made remarkable improvement, just one year removed from taking third in her section, she placed a highly impressive 27th out of 200 runners at the 2016 NXN championship. Amanda then culminated her scholastic career by breaking a 32-year-old Section V record in the 3000 with a 9:35.73.

As her freshman season of cross country at Iowa State rolled in, she continued to see improvement. Quickly moving up the ranks of a team that would place in the top 20 at the NCAA championships, Amanda moved from 6th to a consistent 3rd place team finisher. Full of momentum, Amanda continued her surge throughout the XC season eventually placing 8th at the Big 12 championships to earn All-Conference honors.

Indoor season saw Amanda qualify for the Big 12 conference championships in the 5K. Running essentially as an unknown freshman, she raised eyebrows by taking the bronze medal and beating two cross country All-Americans in the process.

This spring, she also had the opportunity to measure her improved 5K meter times against other notable, national-level runners. A look at her senior year in high school shows that she placed an impressive 4th at the New Balance Indoor Nationals in the 5K. In that race, she also got a taste of what elite runners look like, as she was lapped twice by Brie Oakley, who went on to set the national record that day.

Remarkably, in March of this year--just 12 months after that meeting--Amanda set a huge PR while running at the Stanford Invitational, which allowed her to beat Oakley by 5 seconds. In a meeting later in the year, the margin of victory became 17 seconds. Although they ran in separate heats on both occasions, this achievement clearly testifies to her significant improvement.

April arrived and Amanda found herself matched up against longtime friend and competitor Jessica Lawson in the Stanford Cardinal Classic 5K. Ten months earlier, Amanda had placed second to Lawson, losing by 27 seconds at the New Balance Outdoor Nationals. To make things even more interesting, Lawson ran a 9-second PR at the Cardinal Classic earlier in the year. But it wasn't enough on this day as Amanda set a PR of her own, finishing 15 seconds ahead of Lawson, marking a 51-second improvement over the past 10 months.

As her final semester at Iowa State came to an end, Amanda returned home to prepare for the USATF Junior National Championships. Competing in Indiana's 89-degree heat and humidity, she ran to an impressive third place finish in the 5K.

Her dreams of making team USA appeared seemed shattered, as she was narrowly edged out of a qualifying spot when she lost a mad race to the finish by just six tenths of a second to the number one ranked true freshman in the NCAA, Emily Venters.

This setback meant that in order for Amanda to realize her dream of making the world team, she would have to run in the 3K championship the next day with just 16 hours separating the two races.

The following afternoon, running with the heart of a champion in mid-90 degree temperatures, Amanda successfully earned that berth to the U-20 worlds in the 3K when she crossed the finish line as one of only two competitors to have registered a world championship qualifying time.

With Team USA gear and a ticket to the upcoming U20 World Championships in Finland, she is no longer a runner that can be overlooked.

Fueled by an unquenchable passion for the sport and a personal vow made in her junior year of high school, Amanda has once again risen to the challenge of championship competition and continues her highly impressive rise to national prominence.

Coming soon: An interview with Amanda Vestri regarding her two year progress, insights on the experience of running for a national power house and the inside story on the twitter post of her and her teammate that went viral.