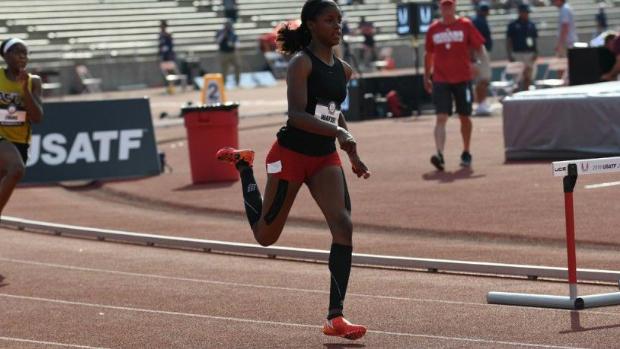 Had she been in North Carolina, Vanessa Watson (Spencerport) would have won the 400H National Title by more than a second.  But the chance to compete for Team USA proved too much an allure, and the stronger field than included College freshman would be a strong building block for Watson's senior year.  So off she went to Indiana, to compete in the USATF Junior Outdoor Championships, a qualifier for the U20 Champs held in Finland.

Competing in the final, Watson would take 4th overall, the third best High Schooler in the field.  She would run 57.77, the second fastest mark ever run by a New York athlete.  Not only that, it is also the second fastest performance ever, meaning only Dalilah Muhammad's Junior Class Record race was faster.  Had Watson been a senior, she would have captured Muhammad's Senior Class Record.

This marks only the second time a New Yorker has gone under 58-seconds.  The closest we've seen was Elizabeth Mott (New Rochelle) back in 2008, when she ran 58.01.  Already owning the Section V Record, this performance obviously improves upon that.  Whether we'll see Watson compete again this Summer is unknown, as many Rochester athletes contest Summer Competitions, but we do know, big things are in store for Watson in 2019.  For now, she'll get to rest as US #28 All-Time.