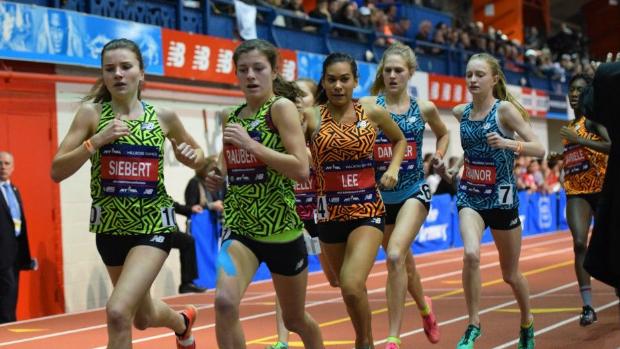 Records are made to be broken. Every athlete knows that. However, it would still be nice to hold on to them for awhile.

The rate at which records are dropping is incredible. Since the year 2000, an average of 18 Class Records are broken per year by combined genders in the Indoor Season. That number has remained steady, even though, in theory, as records continue to drop, they continue to become harder to break. As this trend continues, we're starting to see a redefinition of "Greatness." Once-in-a-generation athletes are becoming once-in-a-decade. Once-in-a-decade athletes are now, maybe even less so.

More Than One Crack At The 1K 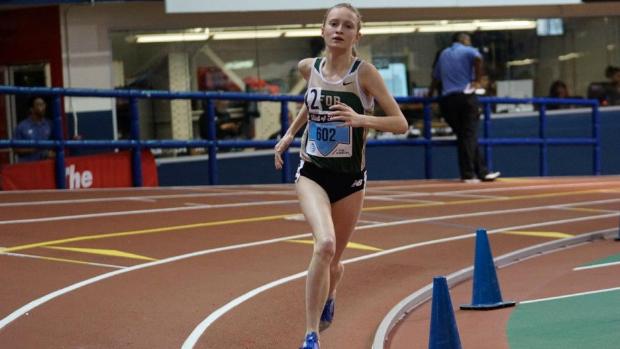 If you've been following New York Prep Track And Field at all over the last few years, there are some names you are sure to know. Sammy Watson.  Kelsey Chmiel.  Katelyn Tuohy. For the past four years, they've been part of a distance running overhaul on the State and National Records, both at the Class Level, and overall.  And yet, their freshly minted legacy is already under threat, before the ink has even dried.

On Saturday, February 17th, the Section 9 Class A Championships were held at West Point, a flat-track facility. There, sophomore Sarah Trainor (FDR) ran 2:49.51 to win the 1000m. The mark eclipsed the State Leading mark of fellow sophomore Katelyn Tuohy (North Rockland), who had run 2:49.72 just a few weeks prior. It also bested the overall Section 9 record set in 2004 by Heather Iatauro (Tri-Valley) at 2:50.93. For those wondering, the banked track conversion for Trainor's time puts her right at 2:47.68.

For many at the start of the season, based on XC, it would be unthinkable that Katelyn Tuohy could be challenged at any distance event, let alone by someone in her same grade. And yet, Trainor has been having a spectacular season so far. She's gone NY #25 All-Time in the 1500m with her 4:32.41. Last year, as a freshman, she went 6:52.07 in the Steeple to take 4th at Outdoor Nationals. And without much fanfare, Trainor is now US #3 in the 1000m.

However, what's more impressive may be that there are now two athletes within legitimate striking distance of Sammy Watson's (Rush-Henrietta) Sophomore State and National Record of 2:47.27. On top of that, Tuohy defeated Mary Hennelly (Suffern) in her 1000m effort, another sophomore who ran a respectable 2:52.84 for second, adding another sophomore talent to the list. Should we see all these athletes line up for the event at the State Meet, we could very well see more than one athlete under that Sophomore National Record.

It goes without saying that Watson could be considered a once-in-a-generation athlete. She broke National Records held by Mary Decker (800m). But Watson was also part of the ongoing trend.  Kamryn McIntosh (Suffern) broke the 600m National Record that had been on the books since 2005. It only took Watson one year to surpass it. Which in itself, demonstrates why its notable when someone is close to erasing Watson from the books herself. Once-in-a-generation is coming at a much higher rate. 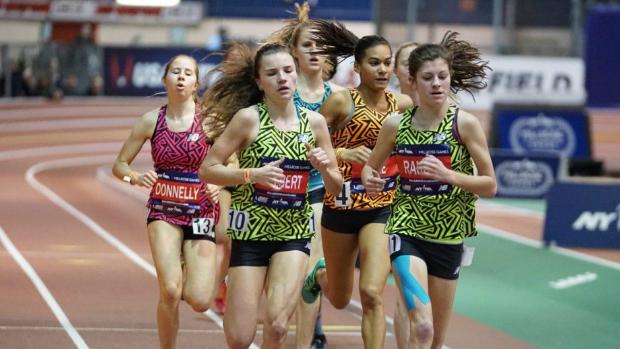 At least for Sammy Watson, who went on to have one of the greatest Prep Careers of All-Time, she was able to leave High School with the Record intact. For Kelsey Chmiel (Saratoga), she may not get that same luxury.

On Sunday, February 18th, the rescheduled Section 3 State Qualifier took place at the SRC Arena, a flat-track located at the Onondaga Community College. There, Freshman Brooke Rauber (Tully) ran a significant personal best in the 3000m, a 9:46.83 winning mark. It stands as the second fastest time ever run Indoors by a Section 3 athlete, trailing only that of Kaitlin Neal's (Fayetteville-Manlius) Section 3 Record of 9:28.59, and also stands as the 6th fastest 3000m for Section 3 Indoors or Out.

The mark is also just five seconds off Kelsey Chmiel's Freshman National Record in the event. At the 2016 Indoor State Meet at Cornell, Chmiel ran to a third place finish in the 3,000m final, clocking 9:41.73 to establish the record.

Why is this relevant? Before Chmiel broke the record herself, it had stood since 1988, when Deresa Walters (Penfield) ran 9:42.20. It had stood for nearly 30 years. Just two years later, and Rauber is well within striking distance, with one more attempt to go. As has been demonstrated, Records are falling at an incredible rate, unlike anything we've seen in the past. And Chmiel herself isn't even done on her own journey.  She's pushed herself to NY #4 All-Time in the mile as a Junior. That would have been a State Record, if not for Mary Cain. She's already bumped herself up to #3 All-Time in the 3000m, with her Sophomore Class Record, and will be looking to move up that list too. The only difference is, while Chmiel is chasing her own legacy, there are athletes now coming up through the ranks behind, chasing her all the same. 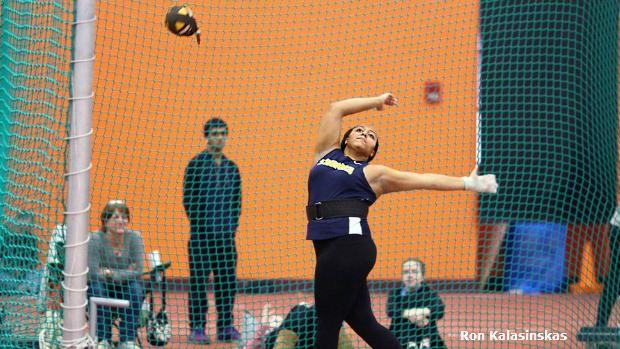 The phenomenon is not limited to the track.  It took 7 years for someone to come along and challenge the Weight Throw Class Records established by Melissa Kurzdorfer (Lancaster) in the years 2007 through 2010. Jillian Shippee (Shenendehowa) erased both the Junior and Senior Class Records from the books in 2016-17, as well as establishing herself in the Top 5 All-Time for the event.

And yet, its only been a year since her graduation, and two names are already eating up the Class Records behind her.  Monique Hardy (Webster Thomas) recently set a Sophomore State Record at the Section 5 Sectional Championships.  Just as quickly as that happened, Natalia Surdej (Lancaster) took home the Freshman State Record two days later.

If the data is any indication, this puts them on a trajectory to challenge Shippee's records over the next three years.  If they continue to improve at a similar rate, Hardy will be attacking Shippee's records, while Surdej follows behind on Hardy's records from the year prior.  No longer will we have an 8-year hiatus between records.  Like the distance events, they are dropping more rapidly.

The Changing Landscape Bringing Out The Best 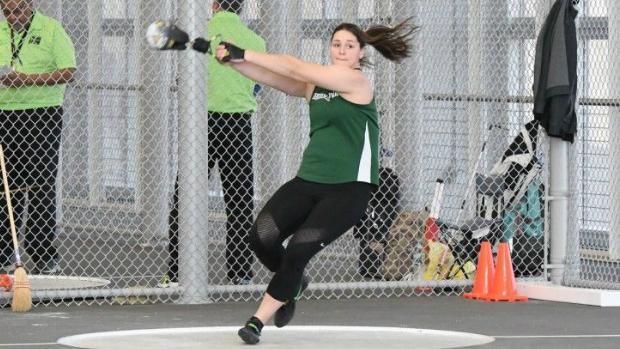 Can we really track the impetus for this rapid turnover of records. For the Weight Throw, it's easy. The event was instituted as a State Event two years ago, and a new crop of throwers have emerged to meet that challenge. We have fully left the landscape where Weight Throw was something added on to a Shot Putter's resume. Weight Throw is now there at the beginning of a throwers' development, and athletes are specializing in the event. It's having a dramatic effect on the All-Time lists.

But what about the running events?

The easy answer? You can thank the internet, as well as the shoe companies. The internet provides proof that the once impossible, is entirely so. Once you realize what the rest of the country is running, it establishes a new standard of excellence, and provides a stimulus to your training.

But what would a stimulus be, without a true outlet. The creation of meets like Nike Cross Nationals, and New Balance Indoor/Outdoor Nationals offer that outlet. A place to truly compete. This in turn, has raised the bar of excellence.

The Importance Of Class Records 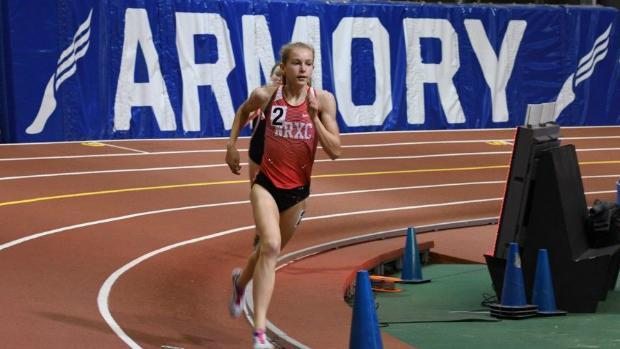 Last week, we examined a singular group of Freshman State Leaders, and followed them through High School.

In short, we found that breakout freshmen stars are having more successful, long-term careers than might have been the case ten years ago. In recent years, athletes have been able to compete with more consistency than ever before. Two athletes we mentioned above, Sammy Watson and Kelsey Chmiel, are both standout examples. Both had breakout careers as Freshman and/or below. Both have consistently improved year-over-year, without any significant injury or illness. Watson graduated with numerous National Records, while Chmiel still has two more years to go, with no signs of slowing down.

Athletes who set underclassmen records are going on to improve, and stay improving, at a rate never seen before. Of all the Class Records set in New York since 2015, 90% of those athletes would go on to set another State Record the following year. The same percentage of athletes finished out High School with numerous State Titles. So, now more than ever, Class Records are relevant in predicting the future of the sport.

Much of this has to do with the improvements in the High School athletics system. In recent years, physical trainers have become all but a necessity in your typical High School. The abundance of training information facilitated over the internet has flourished in the past decade, providing coaches a resource of information not available to those of the Pre-Internet age. Preventative medicine and equipment (ie. ferritin tests, compression attire, and new track surfaces) has proliferated the sport.

That isn't to say injuries and illness' do not still happen at the highest level.  But with the increased staying power of athletes, we're also seeing a decreased recovery period in which athletes need to return to the highest level. Jessica Lawson (Corning) was hampered with injury the beginning of her Indoor Season senior year.  Suffering from a Neuroma of the foot, she took three weeks off to recover. Still, through intelligent cross-training brought about the increased knowledge of the sport, and the body, Lawson was able to come back that season, and capture the 1500m State Title, edging out Tuohy at the line.

Likewise, Lanae-Tava Thomas (Rush-Henrietta) suffered a hamstring tweak last December, of her junior year.  Through intelligent rehab and recovery, she came back in the middle of the season, and went on to capture two Public HS State Titles that March.  Come Outdoor, she went on to smash the Long Jump State Record, and did so again the following Winter.

All of these and more are contributing factors to the continued fall of numerous State Records.

How Low Can We Go? 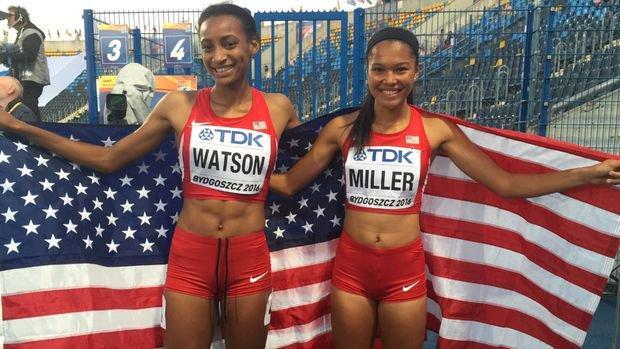 As the sport continues into the 21st Century, High School athletes are continuing to put pressure on the Collegiate and Professional ranks of the sport.  Mary Cain ran 4:24.11 for the Mile as a High School athlete. That's over a second faster than Jenny Simpson's Collegiate Record of 4:25.91. As good as that is, Katelyn Tuohy broke Mary Cain's record in the 5000m; one that she ran Outdoors. Tuohy's mark of 15:37.12 for the Indoor 5,000m would put her 14th Overall in the NCAA, All-Time.

In fact, Tuohy's mark is still the 6th fastest run in the World this year.

And yet, despite these accomplishments, the records continue to drop.

What year will the Record onslaught begin to slow down?  It's happened before, in the 1990's. For the boys, more people broke 9mins in the 3200m last year, than High Schoolers did for that entire decade. Could that happen again?

It's hard to tell. What's certain is that every year, we are sure to see a Record go down that was once thought impossible. Just this year, Bulis, MD broke the standing 4x200m record that was once considered one of the hardest to break in all of the sport. And yet, they still ran 1:35.39 to break that record.

There are a few that are certain to stay for a while. Michael Carter's outdoor Shot Put Record of 81-3.5 seems pretty safe. Mondo Duplantis' 19-4.25 is in the same conversation.

But, then again, anything is possible, and the records don't seem to be slowing any time soon.