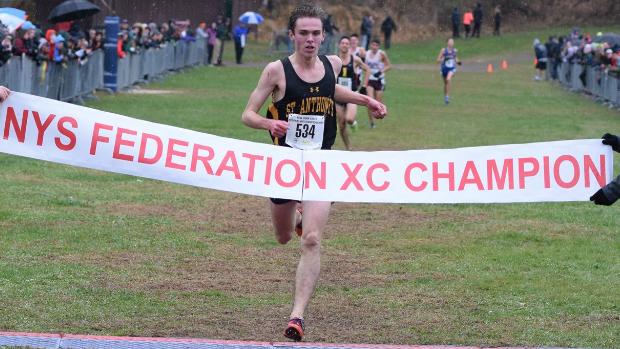 A member of his school's leadership team, Gatewood has donated his time raising funds to benefit a local hospital and breast cancer awareness. "This was only Mason's second year running cross country and he made incredible improvements," said St. Anthony's coach Tim Dearie.  "He was our captain and leader on and off the course, and he beat all the state public school champions at both the Eastern States (Manhattan Invitational) and the New York State Federation meet."

Gatewood has maintained an A average in the classroom. He will attend the University of Pennsylvania this fall, where he will compete in cross country and track and field.

As a Gatorade Player of the Year, Gatewood will be able to select a national or local youth sports organization to receive a grant as part of the Gatorade Play It Forward program. Every Gatorade Player of the Year state winner receives a $1,000 grant to donate and will have the opportunity to enter for an additional $10,000 spotlight grant by writing a brief essay explaining why their selected organization deserves additional support. 12 spotlight grants -- one for each sport -- will be announced throughout the year.