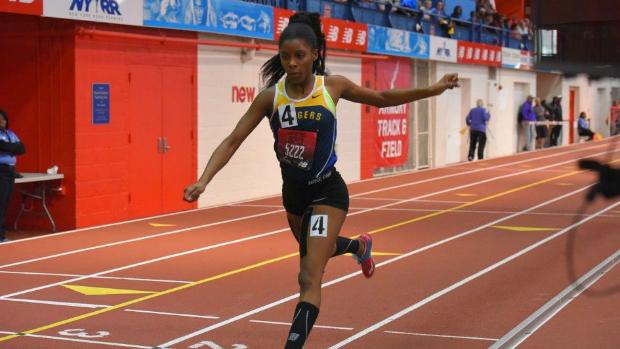 It's a season of continued resurgence for Junior Vanessa Watson (Spencerport), as she keeps moving up the All-Time lists in the Long Sprints.  This weekend, it was back to the Armory for the New Balance Games, as her training partner in Lanae-Tava Thomas (Rush-Henrietta) was setting records of her own back home in Rochester.  In NYC, though, Watson would have another dominating performance.

Up first was the Invitational 500m, a distance that is slowly making a comeback of it's own.  Pushing hard from the gun, Watson led wire-to-wire, and took home the win.  Her mark of 1:12.83 was not only good for US #2 this year, but also for NY #4 All-Time.  It only was slower than that of Britton Wilson, who ran that in much better competition at the VA Showcase, as well as that being their State Meet Distance.

Later in the day, Watson hit the track again, this time in the 600m.  There, she nearly matched her already US #1 mark in the 600m.  She is setting herself up for a big matchup with Paris Peoples (Cardozo), the defending State Champion in the 600m.