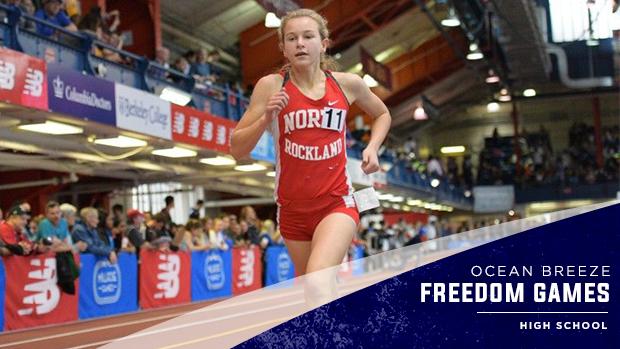 Much like the 600m, Emily Philippides (Greenwich, CT), who has gone 2:50.75, and Jade Sessions (Carmel) who has gone 2:54.58, find themselves atop the seeds.  But unlike that other event, there is a wealth of competition ready to make an upset.
Chief among them is Keelin Hays (Tatnall, DE), who has a 4:55 mile personal best to her name.  That's dangerous at the shorter distance.  Olivia Duston (Herndon, VA) has dipped under 3mins in the event, running 2:59.55 last year.  Meghan Convery (Ridge, NJ) has the shorter distance under wrap, with a 2:13 open PR for the 800m.  There are plenty of girls with big 800m PR's as well, most notable a Ward Melville trio, who we'll see open up in the 4x800m later in the meet.
This could be one heck of a final.

There is plenty of double and triple entering here, so we'll have to wait until race day to see who toes the line.  Keelin Hays (Tatnall, DE) is your top seed, hitting 4:55 last year in the event.  Sierra Dinneen (Notre Dame Academy) and Haleigh Morales (North Rockland) have both been close to five-mins in a relay split, and could challenge for the win.  Of all the distance events, this may be the lightest, but it doesn't mean we can't see a big time.

It's all Audrey Fox (New Rochelle) as she tries to break the 7-min barrier.  There are a few other walkers in the mix, but Fox has the credentials here.

There are sure to be plenty of eyes on this race, but it may not necessarily be for the wire-to-wire action.  Consider this the competitive Indoor debut for Nike Cross Nationals champion Katelyn Tuohy (North Rockland), who scorched a course record nearly every time she hit a race in XC.
It's hard to know what her intentions are here of if she's race fit.  She's entered in a 5000m on the track in late January, and a record is on her mind there, but what about now?  If she was looking to set a meet or facility record in her debut, she sure picked a whopper of a challenge.  That's because the meet and facility record is held by Kate Murphy (Lake Braddock, VA), at US #2 All-Time in 9:14.12.
The state and national record is held by Mary Cain at 9:04.51. The sophomore state record was set last year at  Ocean Breeze by Kelsey Chmiel (Saratoga), at 9:26.28.
There are other notable athletes to watch in the field.  Keelin Hays (Tatnall, DE) has gone 10-flat, and Alex Thomas (Tappan Zee) has gone 10:20, but neither is likely to challenge Tuohy for the win.