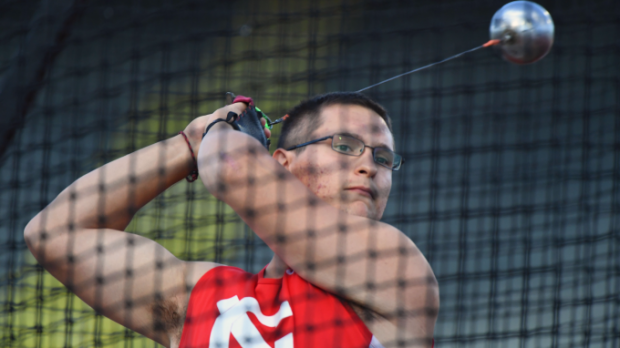 Portions of this article taken from here

Rudy Winkler, the reigning NCAA hammer throw champion and 2016 Rio Olympian, will compete for Rutgers University this outdoor track season. The three-time All-American graduated from Cornell in the spring; Ivy League schools do not offer the opportunity to compete for five years.
The 22-year-old's best mark in the hammer throw is 76.76m, which netted him first place at the 2016 U.S. Olympic Trials and a spot at the Olympic Games in Rio.
-----
Winkler hails from Section 2 in New York, otherwise known as the capital district.  He competed for Averill Park, before moving to work with his club coach, Paddy McGrath.  He went on to set the National High School Record in the Hammer Throw his senior year.
Winkler will join another Section 2 alum at Rutgers.  Izaiah Brown, who ran for Amsterdam until 2015 has also attended the Jersey based University.  Brown owns several State Class Records at the 300m and 400m distances Indoors and Outdoors.  Once in college, he has run several NCAA leading Indoor marks, but has been hurt for much of the NCAA Season.  Brown currently owns a personal best of 45.27 in the 400m.
----
"A big part of my decision to come to Rutgers was the competition in the Big Ten," Winkler said in a Rutgers press release. "Having a season where I'm competing at bigger meets consistently will be good for me. The Big Ten a few years ago in the hammer was ridiculous. Training for the 2020 Olympics is going to be a big thing. I think I have some potential to get back there."
Rutgers throws coach Robert Farrell said of Winkler, "He's an outstanding young man who has competed at the highest levels. He epitomizes what it is to be a successful student-athlete, excelling both in the classroom and in the hammer. I can't wait to get started and help him accomplish his dreams."
Winkler graduated from Cornell with a degree in biological engineering. He will pursue a Masters of Business and Science at Rutgers.