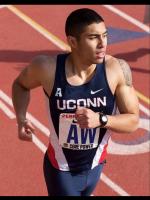 2014 Fantasy All-Star Relay: What If?...
What if High School athletics were run like the Olympics?  If each state would have their own Olympic Qualifier, to compete against other states like the United States does against the other countrie...

Freshman Sammy Watson Goes US #11 All-Time Over 800m...
Humble, TX - While many of the worlds eyes are on Oregon, others have traversed towards Texas, for the USATF Junior Olympics.  Names like Trentan Beram, Zola Golden, Hope Pietrocarlo, and more have m...

NY's Four Horseman Of The 400 Meters...
New York - Well, we had a glimpse of the depth of talent indoors.  Seven of the top Ten times in the Nation over 300m were held by New Yorkers.  Several of those marks landed on our all-time list. ...