Manhattan NY -  MileSplit was on-site for the Millrose Games this year.  With a great slew of high school competition, the meet provided great times and great results.  Look below for some highlights.  Also be sure to check out all of our Athlete Interviews and full photo albums on the Meet Page

Boys Mile
Zavon Watkins has had quite a different season from the year before.  Last year, Watkins was known for his intense speed over 800m, but this year, it is a completely different story.  We've seen Watkins bumping up in distance, up to the mile for both The US Open and the Millrose Games Trials.  The transition seems to have played right into Watkins' hand, as he now has established a race strategy that has proved thus far unbeatable: he waits. 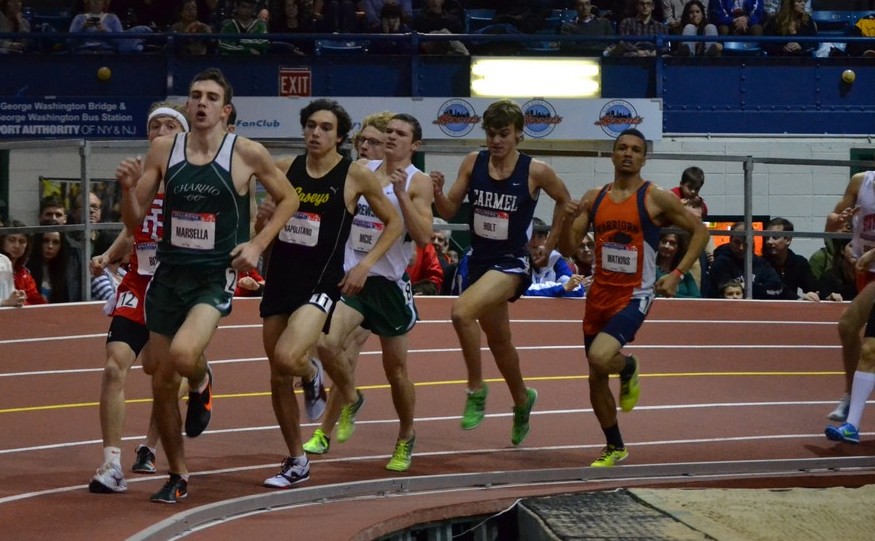 With 500m to go, the two top seeds in the Millrose Mile, Watkins and Ned Willig of Great Valley (PA), were sitting at the very back of the pack.  Watkins has a kick that had helped him score a big win two weeks ago at the US Open, but there were some questions if he could make up this deficit.  Those questions were quickly answered, as the race passed through the 1200m mark.  Watkins began eating up the pack at a remarkable rate, soon finding himself within inches of the leader.  Mike Marsella of Chariho (RI) had not yet seen the orange jersey of Watkins' school of Liverpool, but as that final lap came, orange is all that was on Marsella's mind.

Watkins pushed the pace, extending his new found lead, all the way to the tape, where he emphatically burst through the line.  His expressions were clear, this was his race.  Also, be sure to check out our facebook, where Zavon won the Photo of the Week. 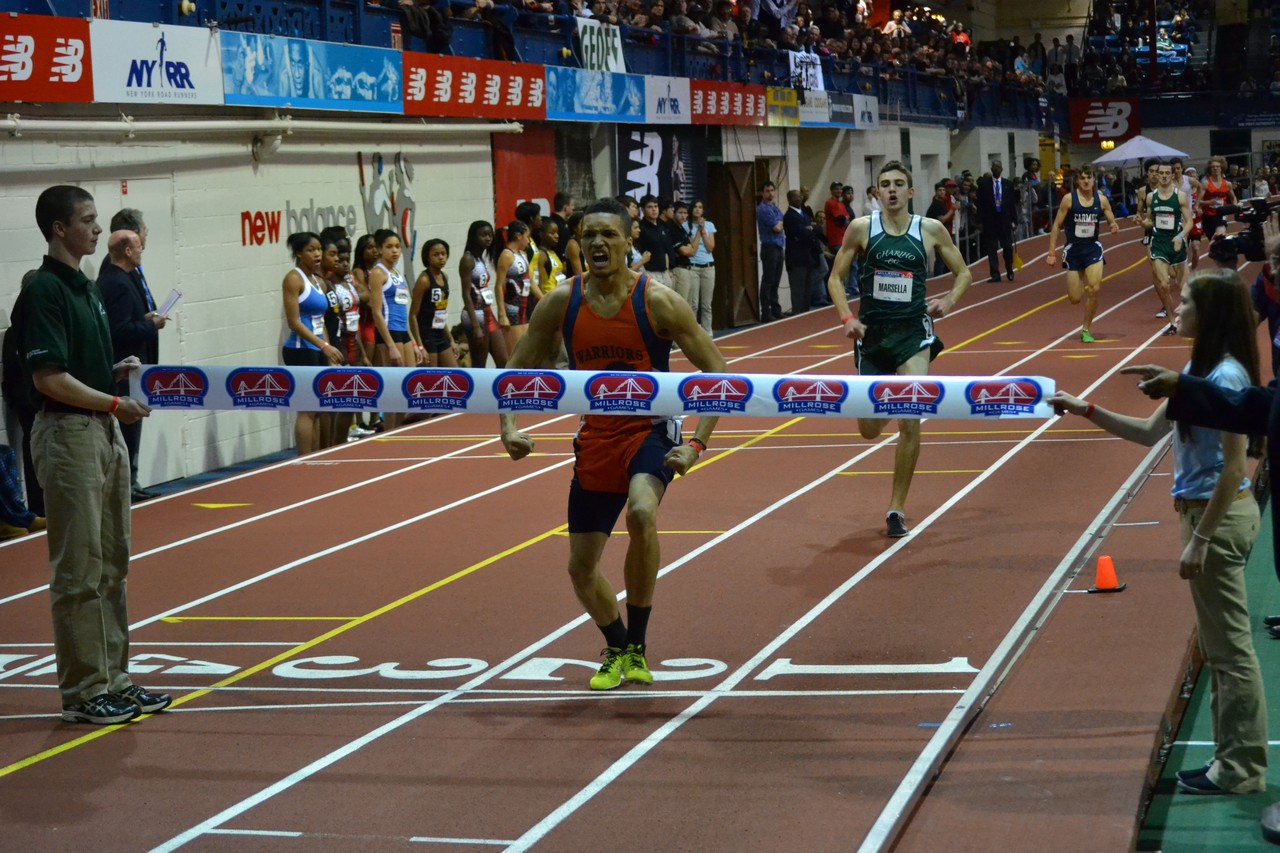 Girls Mile
2011 is shaping up to be the winter of North Shore.  Coming off strong from a championship cross country season, there was little time for rest for the senior duo of Samantha Nadel and Brianna Nerud.  At the same time, its one thing to be dominating the early season matchups, its an entirely different thing to maintain that excellence over the course of the season.  That is what sets North Shore apart: their endurance.  They have been hammering down the backstretch to US leading times all season, and look to be in good shape to continue to do so. 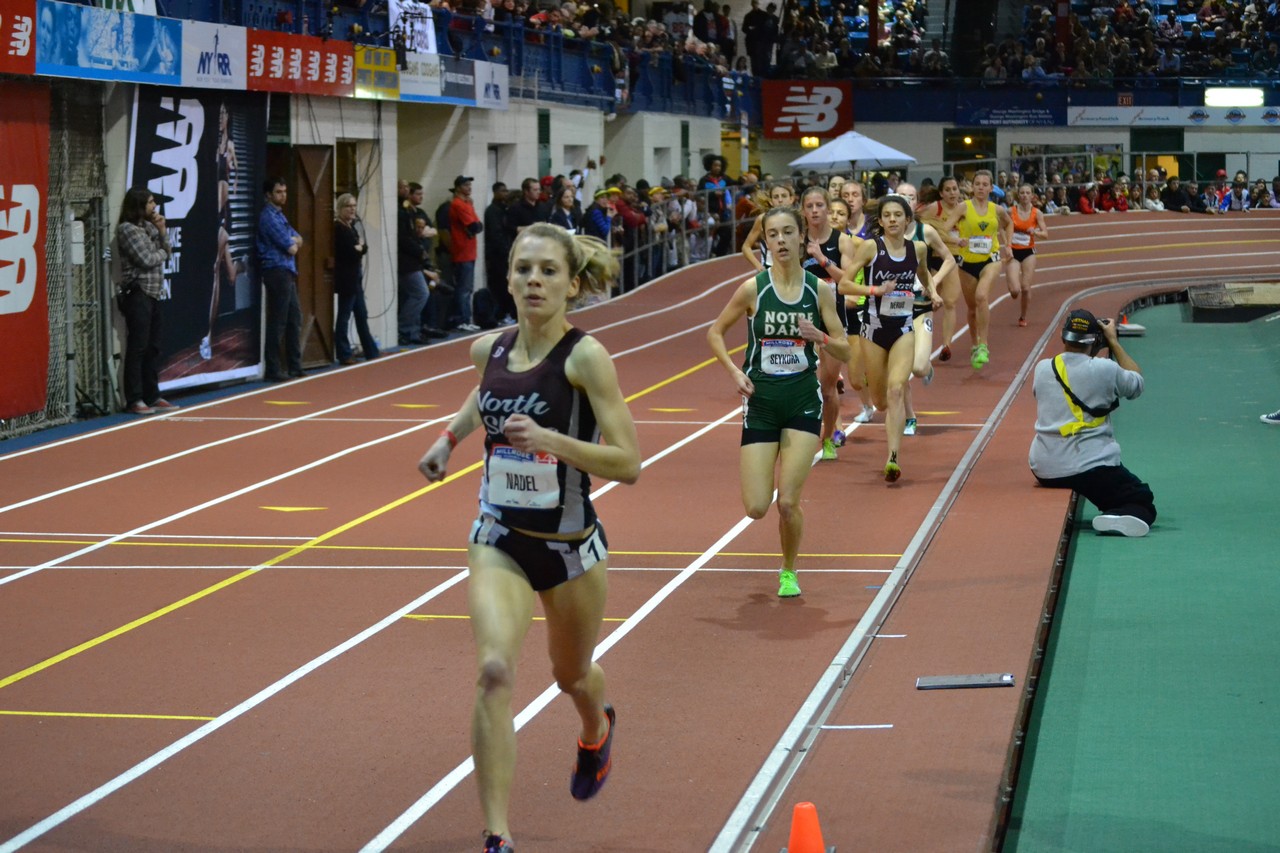 Over the past few weeks, Samantha Nadel has been surely cementing herself in New York distance running history.  She broke the venue record at Madison Square Garden just two weeks ago.  Her 4x800, where Nadel regularly drops 2:10's, was atop the US list all season until only earlier in the night Garden City topped the mark.  And any good runner knows, once you give Nadel an inch, you're giving her the mile.

Nadel spent the first few laps jostling into position, as the crowded field took time to separate.  About 400m in, she saw her lane, and quickly separated herself from the pack.  After she was clear, it was Nadel vs. the clock, as she kept pushing her own pace to the finish.  Behind her, about 50m back, was North Shore's other battle.  Brianna Nerud was battling with Megan Moye of Cosby (VA).  Ultimately, it would be Moye to take 2nd place, some 3.5 seconds after Nadel had grabbed the Millrose meet record.  Nerud was a close third, finishing only two tenths of a second behind Moye.

Samantha Nadel's time of 4:46.19 may not have been as fast as some people thought she might go, but the dominating way in which she ran said more than the time.  Georgetown is set to get one of New York's best distance runners ever. 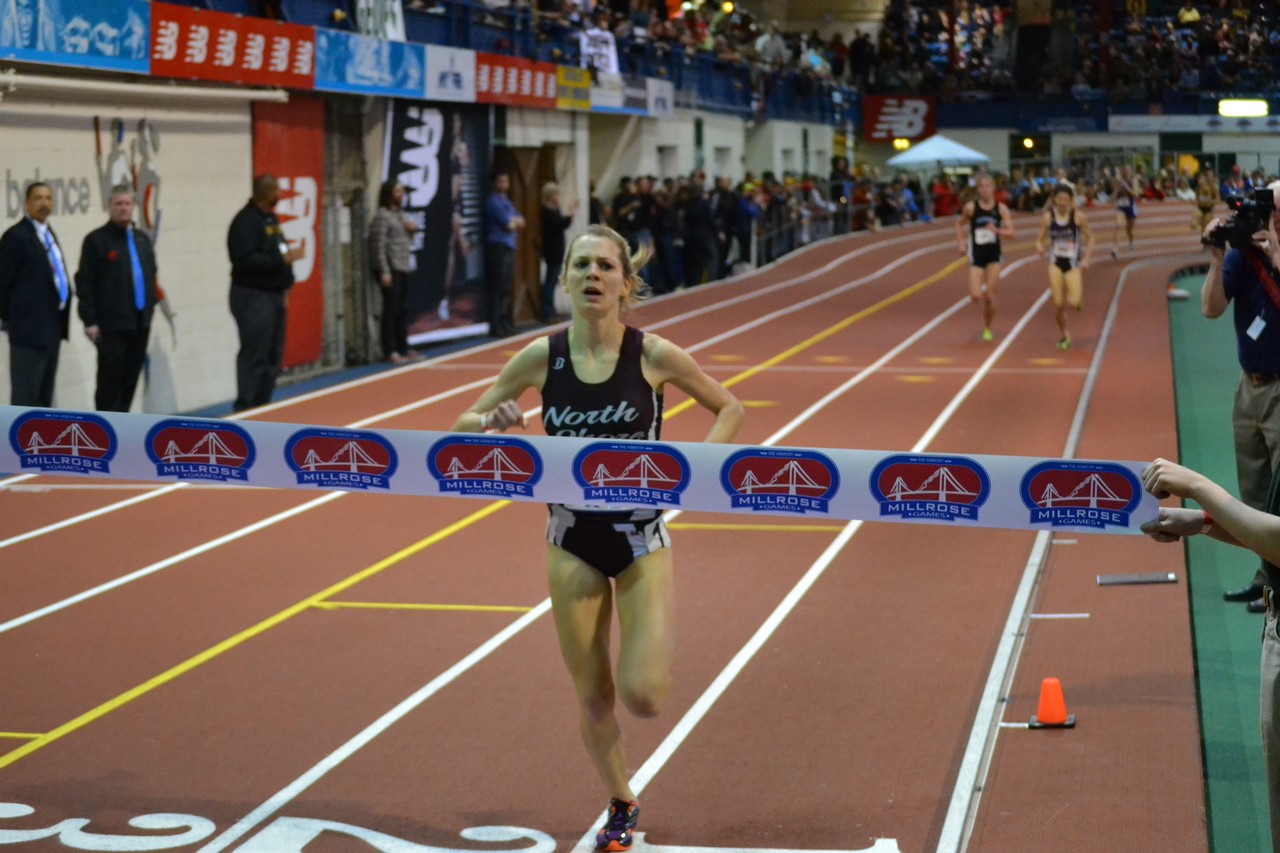 Two nights ago, Robert Rhodes was in a hospital with flu-like symptoms. His hacking cough was so bad that he couldn't sleep and his mom took him to the nearest E.R.

On Saturday night, the senior captain showed no symptoms of his illness. Rhodes anchored the high school boys 3200 meter relay team with a 1:54 split to finish off an impressive come-from-behind victory for Boys & Girls High School to repeat as champions. They ran a season-best 7:51.83.

"He was courageous," said his Hall of Fame coach, James Jackson. "It's his last season and he said he wanted to give us at least one."

The Kangaroos found themselves in a deep hole heading into the third leg, but Richard Rose dug them out of tenth place to hand off to Rhodes for the anchor leg. Rhodes only trailed Colonie's Jordan Johnson and quickly passed him and built his lead.

Rhodes, who has sub-50 speed in the 400 meters, sat out the 1600 meter relay, a race that Boys & Girls also dominated in a race that took place about an hour later. Their team of Rose, Javaun Grant (who also ran the 3200 meter relay), Joelle Johnson and Curtly Renwick broke tape in 3:21, about three seconds of their state record performance in last weeks' New Balance Invitational in Boston. 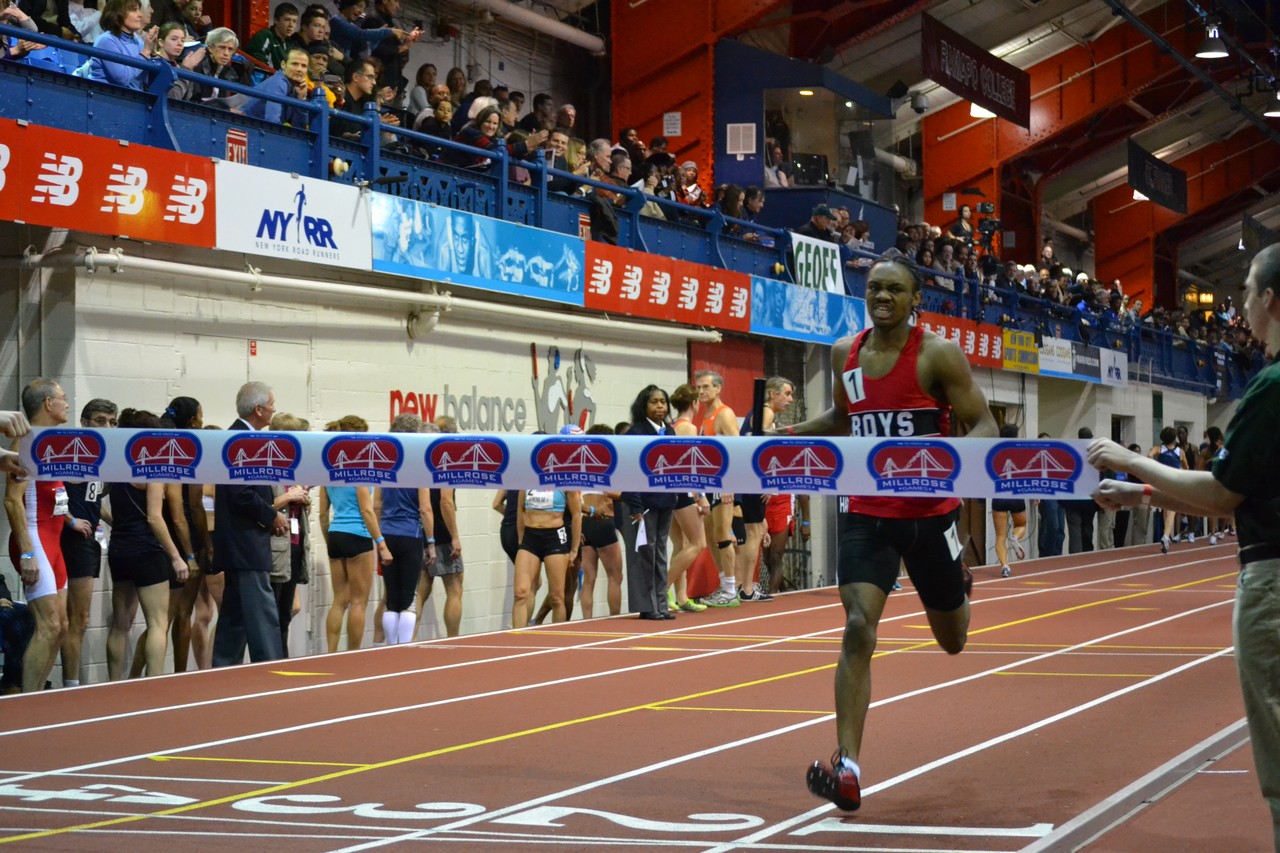 Long Island's powerhouse Garden City High School 3200 meter girls relay team leapfrogged four teams in the national rankings and smashed their own season best to win in a U.S. No. 1 time of 9:00.92.

Senior Taylor Hennig, who led off the race, said that the national best time was a heading into the race and something that they hope would set them up for a good showing in the national meet next month. Last year, Garden City was the national runner-up at the New Balance Outdoor Nationals in the same event, with a school record time of 8:47.90.

Besides Hennig, a short distance specialist who said 800 meters is long for her, the Garden City relay team is made up of a bunch of youngsters. Sophomore Katie O'Neil blasted into the lead on the second leg after Hennig handed off to her in about fourth. O'Neil passed it not to her eighth grade sister, Emily O'Neil, who held the lead for freshman anchor Emma Gallagher.

The time puts Garden City at U.S. No. 1 over another Long Island team, North Shore, which ran 9:04.99 last week at the New Balance Collegiate Invitational. Two of North Shore's top runners on that team took podium spots in the girls Millrose mile. Garden City's previous best this year was 9:21.62. 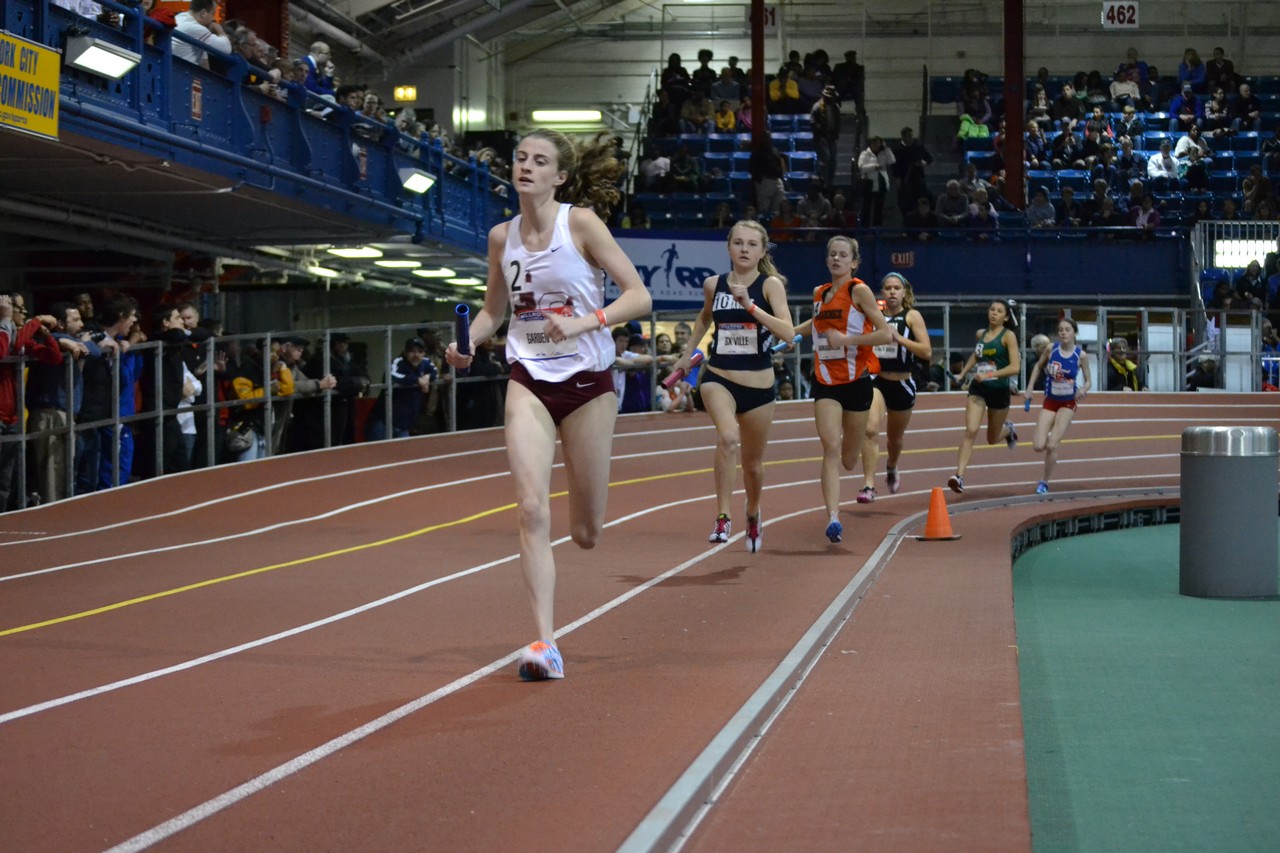 Maybe the only thing more impressive than Bernard Lagat's record performance in the Millrose Games 5000 meters tonight was the strategy mapped out by his coach, James Li.

Li couldn't sleep on an early morning flight from Arizona to the East coast. So he took out a piece of scrap paper and wrote out a detailed plan for his veteran Olympian, with a lap-by-lap plan. After the race, when Lagat broke Galen Rupp's national mark in 13:07.1, Li looked down at that same piece of paper and realized his runner nailed it his goal time of 13:07.
"It went exactly how it was supposed to go," Li said. "It was amazing."
"He worked out everything, including where the race would go," Lagat said. "Coach, he always does a great job in terms of that."
Lagat sat on the shoulder of Lawi Lalang and Stephen Sabut, runners who Li also coaches, for the majority of the race. Then, with 800 meters to go, Lagat made a tactical move that has come to define his legacy as an indoor runner, moving around Lalang and Sabut and powering into the lead. Lalang's runner-up time of 13:08.28 was a collegiate record. It is the ninth championship – and first non-mile championship – in his storied career at the Millrose games.
St. Benedict's Edward Cheserek, who was lapped and finished second to last, probably had a performance to rival Lagat's. As the race's lone high school competitive, Cheseret ran 13:57.04, breaking the American 5000 meter high school record set last year by Lukas Verzbickas.  Cheserek proves that you can finish last, yet still be a true winner. 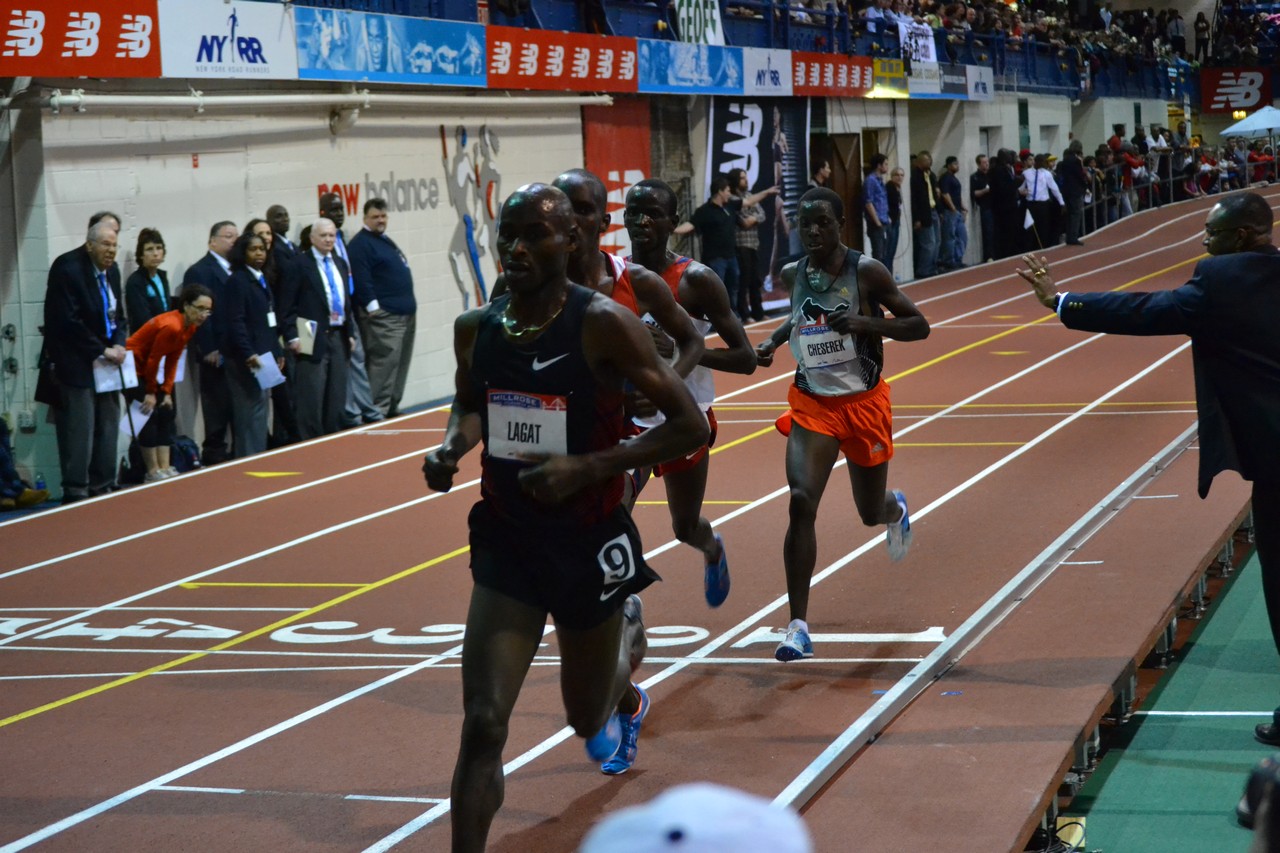