While school may have been on break, New York's high school athletes were certainly not.  The week has seen some of the best early season times ever, as well as hosted some major meets in and around the state.

The DMR's take over the Marine Corps. Classic

Rush-Henrietta Sperry has been a powerhouse for Section 5 in Cross Country.  They made headlines after they were controversially overlooked for an At-Large bid for the NXN meet in Portland.  After the troubling decision, the team decided to leave nothing to chance with their upcoming Indoor Season.  That mentality was taken to heart at the Armory on December 27th, after they ran away from Warwick Valley to claim gold in the Distance Medley Relay with a time of 10:20.54.  Their win saw themselves ahead of both NXN individual qualifier Dan Galford's squad from Monsignor Farrell, as well as eventual NXN Champions CBA out of New Jersey. 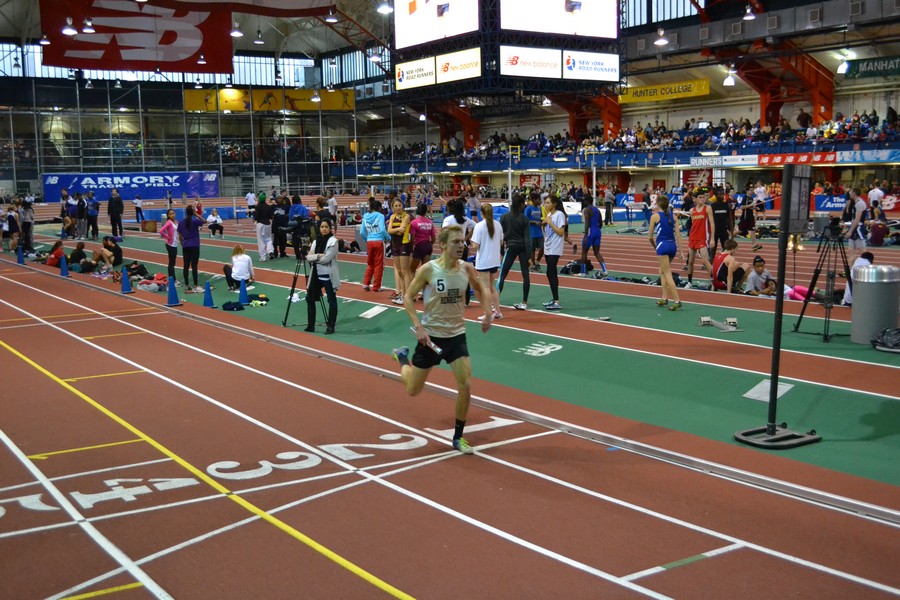 Back on the track just moments later, North Shore returned from their record breaking 4x1500 meter National record last week to record a staggering early season DMR time of 11:43.23 .  With the National record standing around the 11:35.00 mark, its hard to argue that this is out-of-reach for the quality team.  While North Shore may have finished 3rd in Cross Country, they are currently the team to beat in distance relays this winter.  Of course, the road to the national championship runs through Fayetteville-Manlius, who were last seen running 11:25.13 outdoors.  While that time may be unattainable indoors, the matchup may force a National record to go down to secure the win.  However, that matchup may be prevented by scheduling.    North Shore coach Neal Levy has made it clear that his goal this year is to run a strong 4xMile at Nationals.  Last year, the DMR and 4xMile were on separate days, so if the scheduling stays the same, North Shore is on track to have an impressive season ahead of them.  The double is never out of reach however, as North Shore came back later in the day to win the 4x800m relay in 9:19.52. 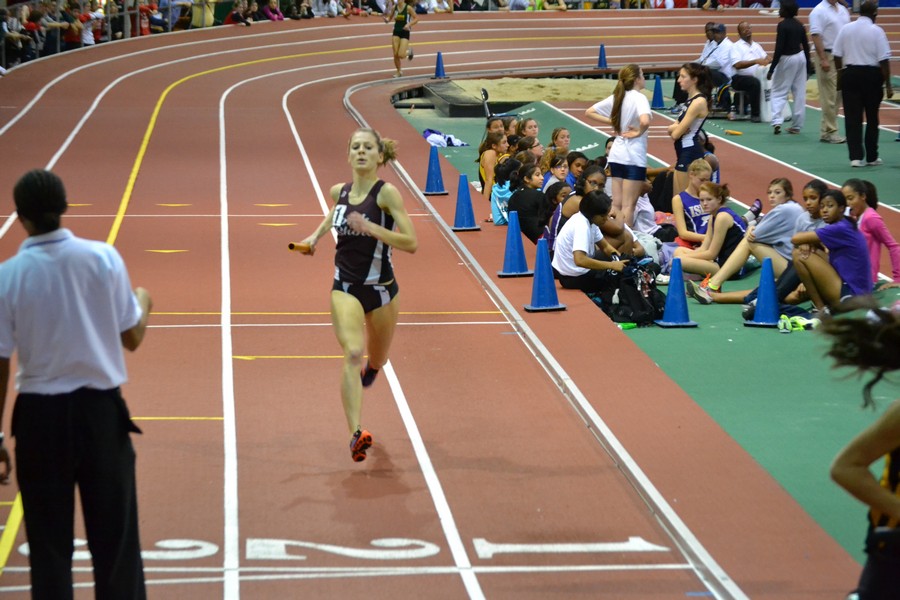 The 800 meter also saw the return of Christopher Columbus' Strymar Livingston, who won the event in a fast 1:53.91 .  Look for an expected rematch between Livingston and Zavon Watkins of Liverpool in the 800 meters at the state meet again this year. 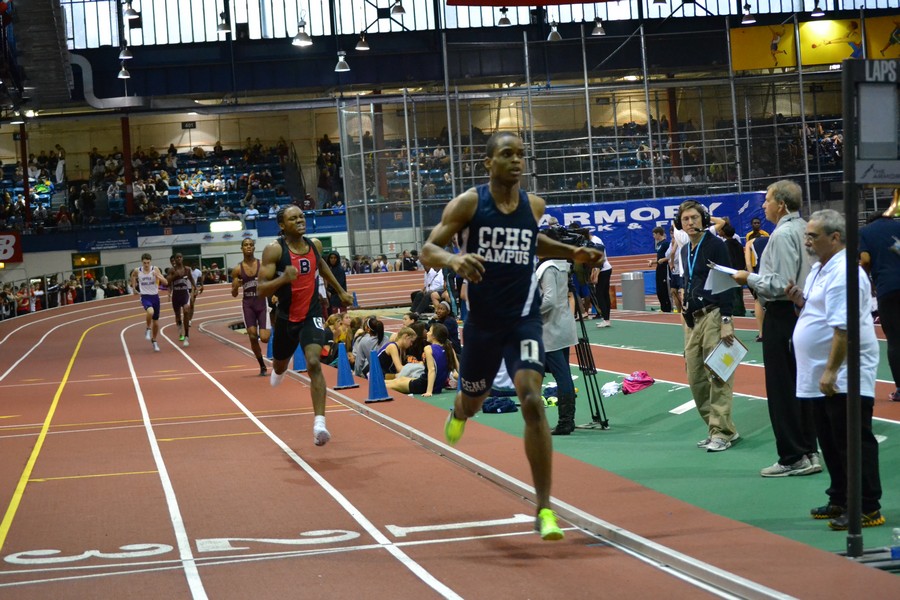 All Pictures Can Be Found Here

Vaulting Above the Rest

Greg Gallagher of Iona Prep is used to flying high.  He currently resides at the top of the state leader board for pole vault with his clearance of 15'00" at the CHSAA Varsity Invitational on December 29th.  Right behind Gallagher is Michael Brunoforte from Saint Anthony's.  Brunoforte has also cleared 15'00", but lost to Gallagher based on misses at the CHSAA Relay Carnival. 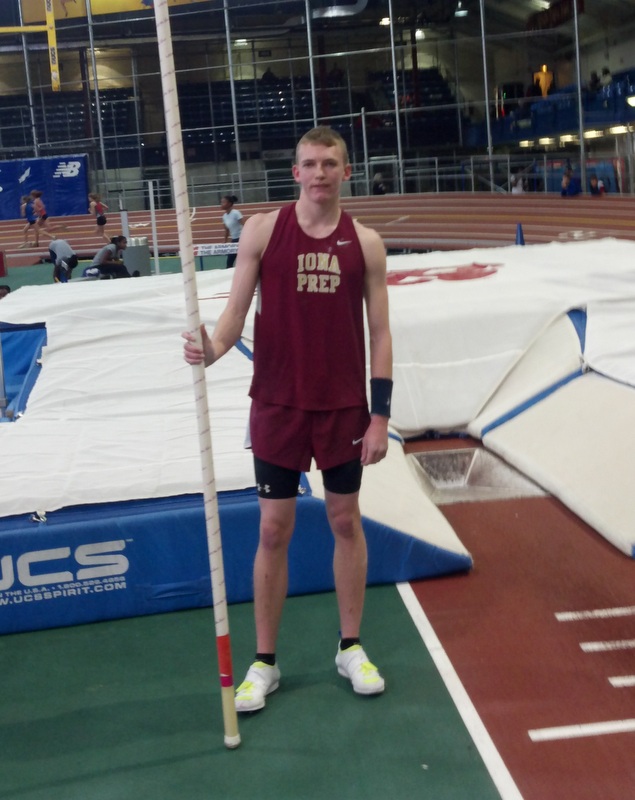 FM's Cross Country Squad is Back On Track

After a much deserved break from a stellar XC season, which saw a national championship for the girls, Fayetteville-Manlius' cross country team has returned to competition.  Junior Nick Ryan won the 1600m run in 4:26.19 and the 3200m in 9:49.52.  Running on the flat track of the new OCC Facility, these times are good indicators of the performances to come.  Teammate Jillian Fanning also saw success, as she ran 4:50.35 in the 1500m.  All-American Laura Leff of West Genesee also saw a return, as she ran away from the competition in the 3000m, finishing in 10:22.34.  Junior Jekytha Adkins of Homer continues winning the 55 meter hurdles, with a season best of 9.1 this year.

Dezmond Mobley of Greece-Olympia reached new heights, as his new PR of 6-6 in the High Jump puts him in the top 5 in the state.  The Section 6 Cross Divisional meet also saw a new state leading mark on the girls' side.  Erica Williams of Batavia threw the shot to a distance of 42-8 to capture the win. 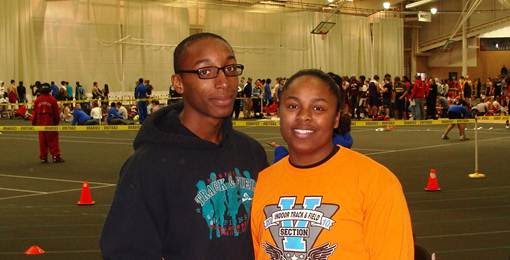 The North Shore Invitational saw over 100 teams competing on December 30th at the Armory.  Directly in the middle of the meet saw two invitational miles, which would serve as Millrose Mile Qualifiers.  The girls ticket was taken by North Shore's own Briana Nerud in 4:58.45 .  Briana ran away from the pack to secure her win, after being followed step-for-step by Pennsbury PA's Sara Sargent for the first half of the race.  The boys race was closer, and was ultimately won by Mountain Lakes' Stephen Lewandowski out of New Jersey.  He would win in a strong 4:16.66 .  Check out the growing list of Millrose Qualifiers, as well as purchase tickets, at the Armory's own site, here. 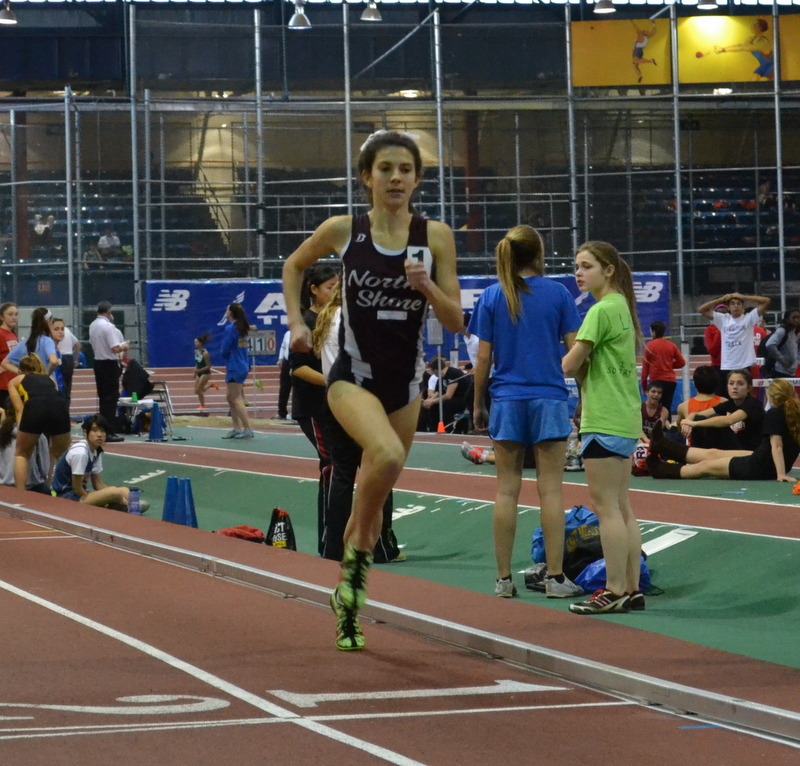 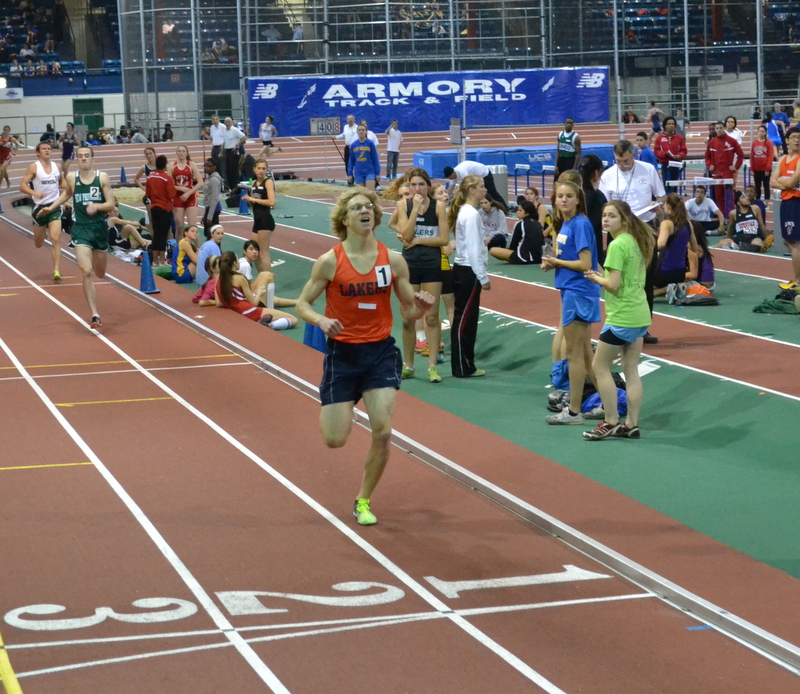 All Pictures Can Be Found Here

Ted Okon, a 10th grader from Clarence came in first place in the high jump at a height of 6’.

“My PR is actually 6’4’’, but my knee was feeling off today so I didn’t jump as well as I would have liked,” quoted Okon.

Clarence also took first in the girls 1000m run. Katelyn Tresino ran an FAT time of 3:11.8, which puts her at number one in the section for the girls 1000m. This senior stated that after high school she wants to continue running in college, possibly at a DIII school, but she is not certain about which school yet.

The boys 1000m turned out to be a very competitive and close race between Adam Murphy from Amherst, Alex Eaton from Clarence, Andy Hayes from St. Francis, and Mark Mercer from Orchard Park. Murphy was in the lead the whole race and ended up finishing with a time of 2:43.84, which puts him in second on the section 6 leaderboard. Mercer was in forth for most of the race, close behind Eaton and Hayes but ended up finishing in 2nd after just barely passing Eaton at the end. Mercer finished with a time of 2:44.64.

“I am hoping to run at a DI school after college,” quoted McCadden.

Bender quoted, “My goals this season are to go to states and break ten minutes in the 3200m.

Junior Sarah Spitznogle came in first place in the girls 300m dash with an FAT time of 45.2. She is from Williamsville East.

Brian Cumminsky, a senior from Clarence, came in first place in the boys 300m dash with an FAT time of 37.24. He is now first in the section. Brendon Allman, from Orchard Park, also showed an impressive performance in the 300m. This 12th grader came in 2nd place with a time and PR of 38.04. He is now second in the section.