New York NY - It was a busy weekend in the city, as the Armory was host to both the Jim Mitchell Invitational, as well as the Bishop Loughlin Games.  Both had star studded line-ups that didn't fail to deliver amazing performances.  Let's look at some of the best times of the weekend.

Mary Cain of Bronxville blasts a 2:49.58 in the 1000 meter run to start off her indoor season.  The time makes Cain 14th best All-Time at the distance.  The state record stands at 2:48.44, and with the effortless performance at Mitchell, its not hard to see that record falling before the end of the season. 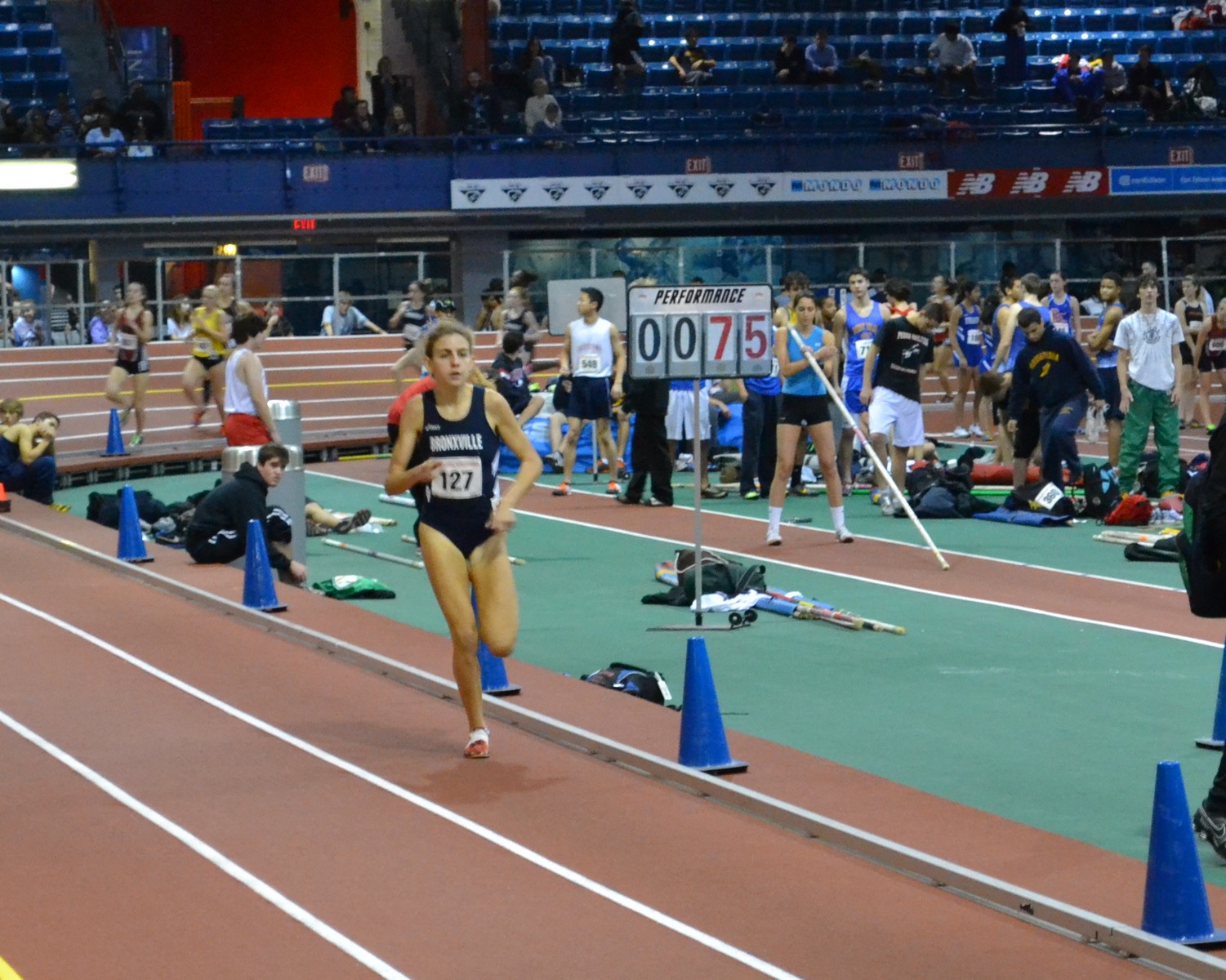 Th evening concluded with the race everyone was looking forward to.  Neal Levy's girls from North Shore had all the making for this 4x1500 meter relay.  The top four, returning from a strong cross country season, included Samantha Nadel, Briana Nerud, Jessica Donohue and Elizabeth Caldwell.  The record, on paper, seemed like a high order to meet for such an early season race.  However, after the first leg of the relay was well under the neccesary split time, it finally became a question of how much under could they go.  The record stood at 19:16.43 by Class C Greenwich, but after the baton was handed off to Nadel as the clock hit 9:53, the question changed to how far under 19 minutes would the girls go.  Sam Nadel and Briana Nerud are North Shore's powerhouses, and saving them both for the second half of the relay meant they were chasing the clock.  Out of any danger from 2nd place, they could run their race looking for a time.  As Briana Nerud crossed the line, all she could do is look up at the time.  The clock read 18:50.91, a time that would best the record by over 25 seconds.  You can expect a lot more out of this relay from later in the season. 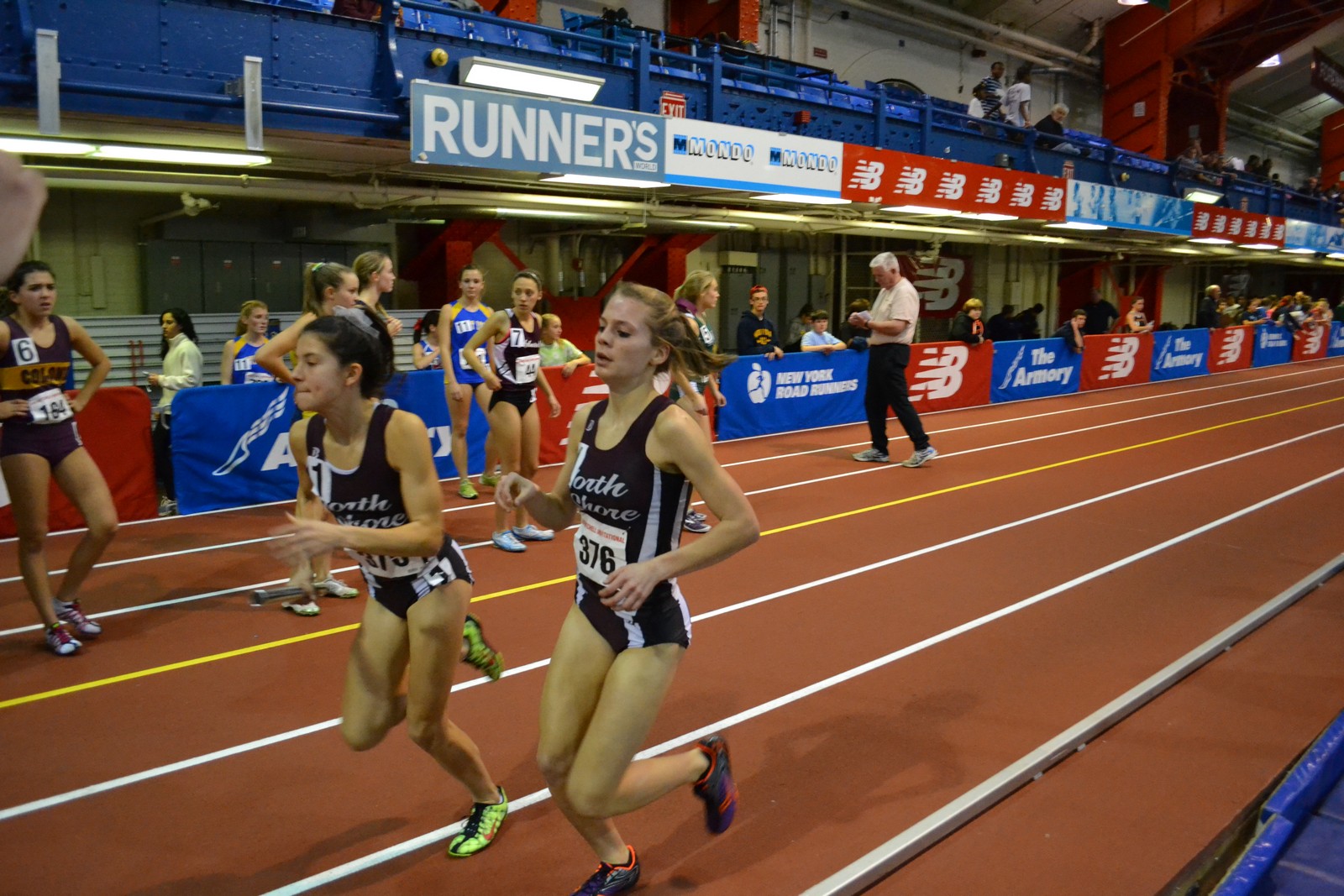 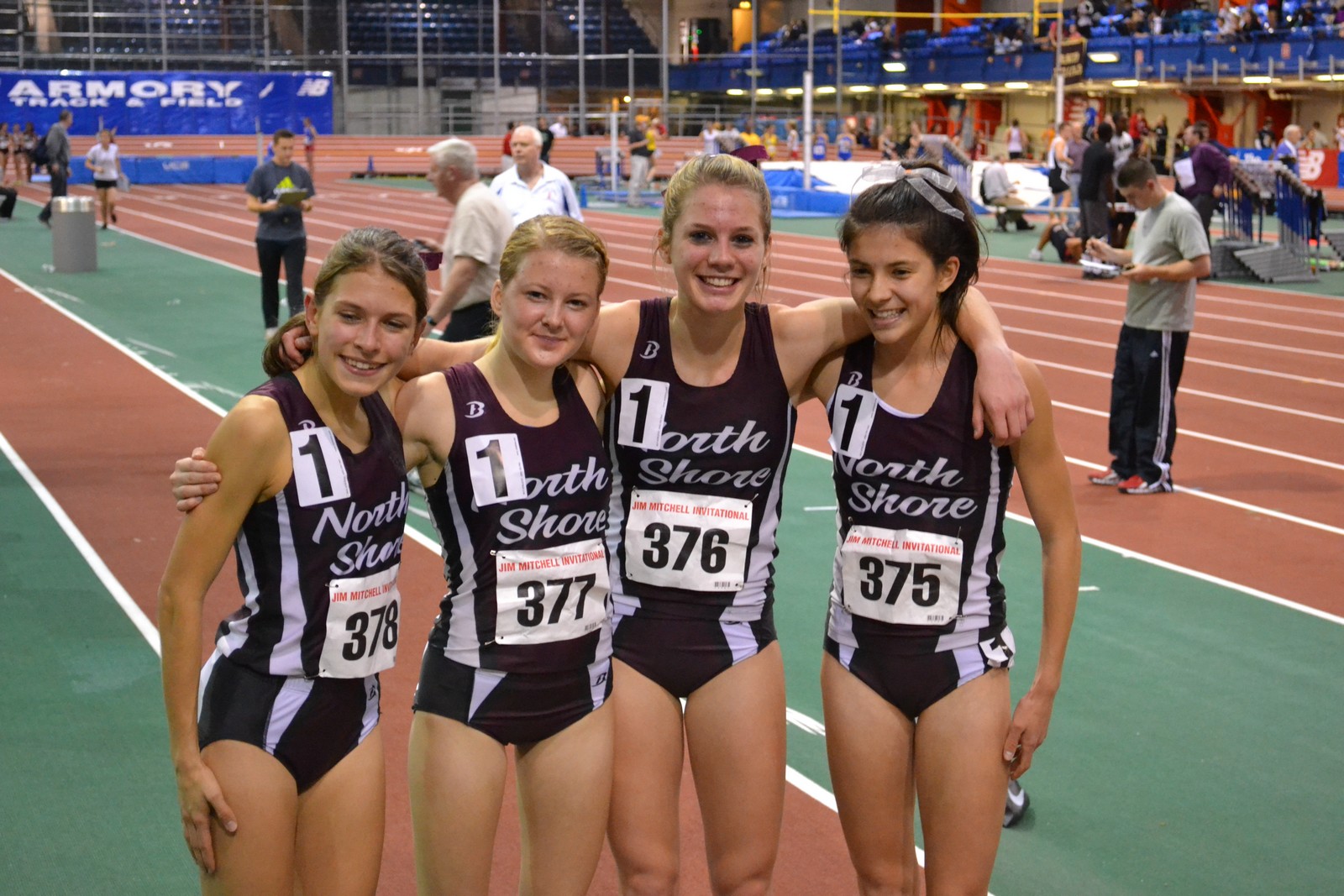 Teams came from New York, as well as numerous surounding states to compete in the 58th Annual Bishop Loughlin Games.  The day started getting interesting as Alexis Panisse of Benjamin Cardozo, who finished 30th at Foot Locker Nationals two weeks ago, stepped up to the line for the 1-mile run.  The race would serve as an auto-qualifier for the Millrose Mile, which has moved to the Armory on Febuary 11th.  The next fastest seed was Mary Seykora of Notre Dame PA.  The race would play out much like it was seeded.  Seykora led for the first two laps, but then Panisse started to pull away.  A late race surge by Seykora began to close the gap, but the effort was enough to stop Panisse, who would secure her spot with a finish of 5:00.87. 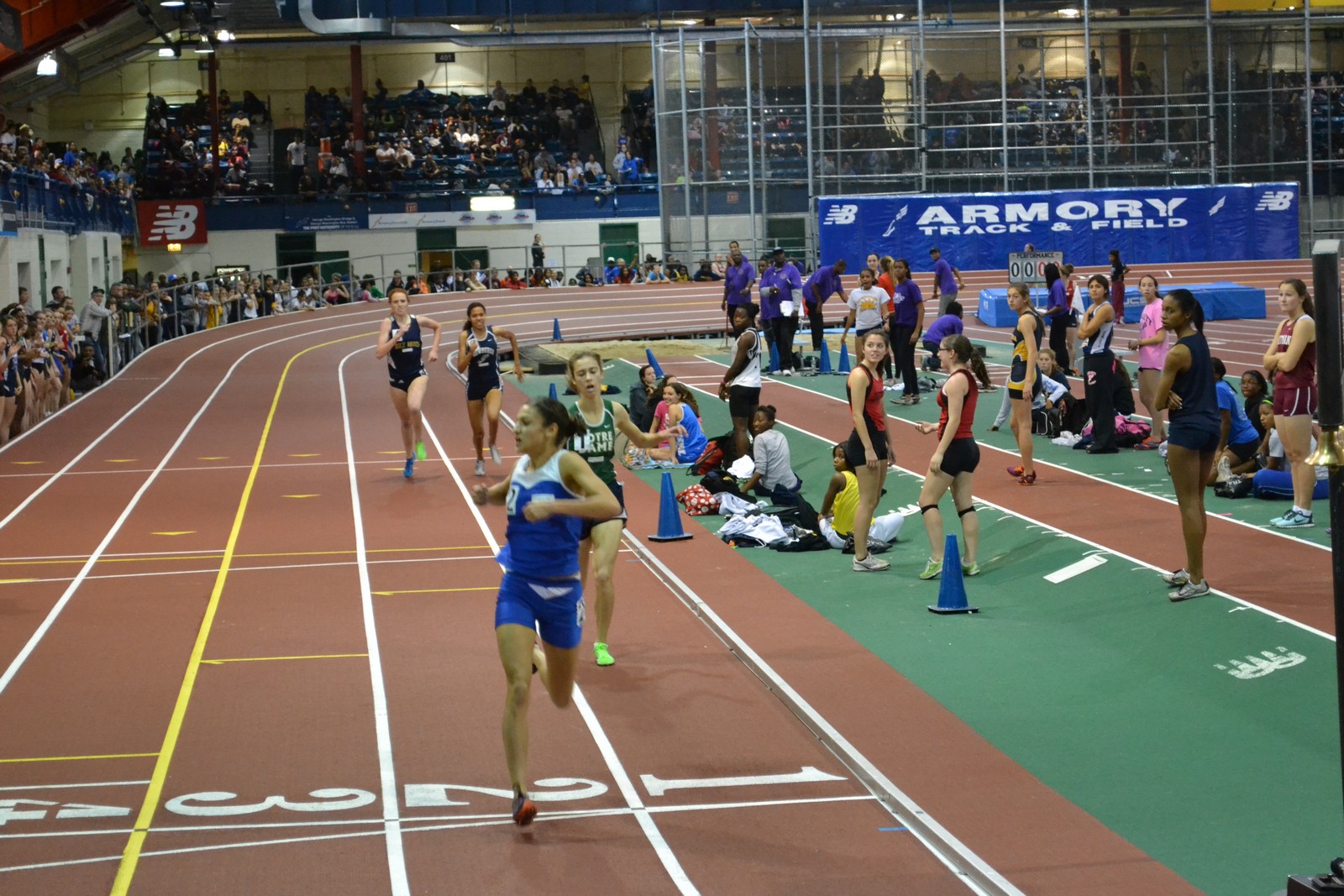 Fast times from the city didn't stop there, as Kadecia Baird of Medger Evers upset top seed Kyle Plante of Colonie, to take the 300 meter dash.  Baird's time of 38.34 now stands as 11th All-Time in the nation. 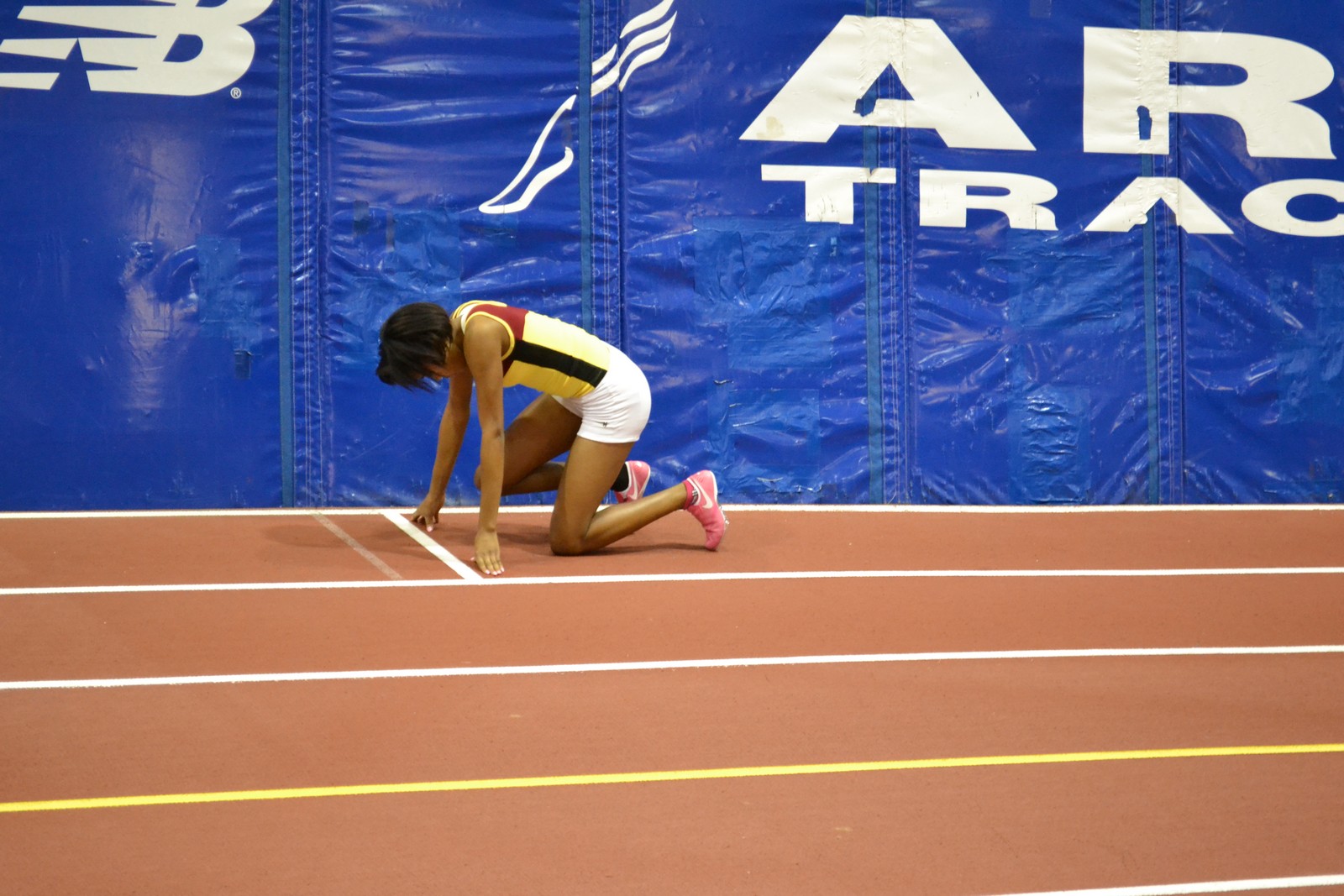 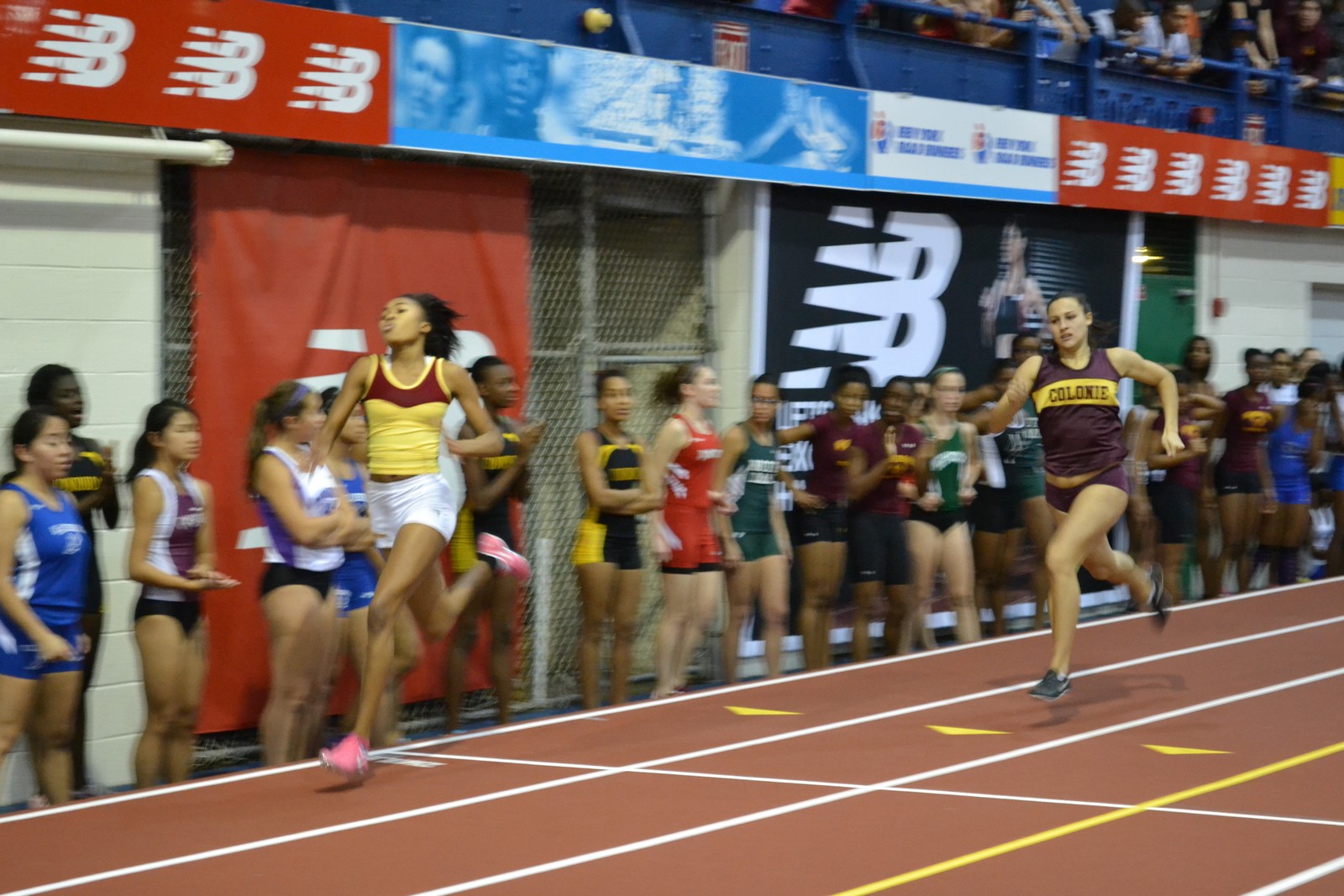 The girls from Medger Evers continued their dominance, after they set the meet record for the 4x200 meter relay in 1:41.07 . 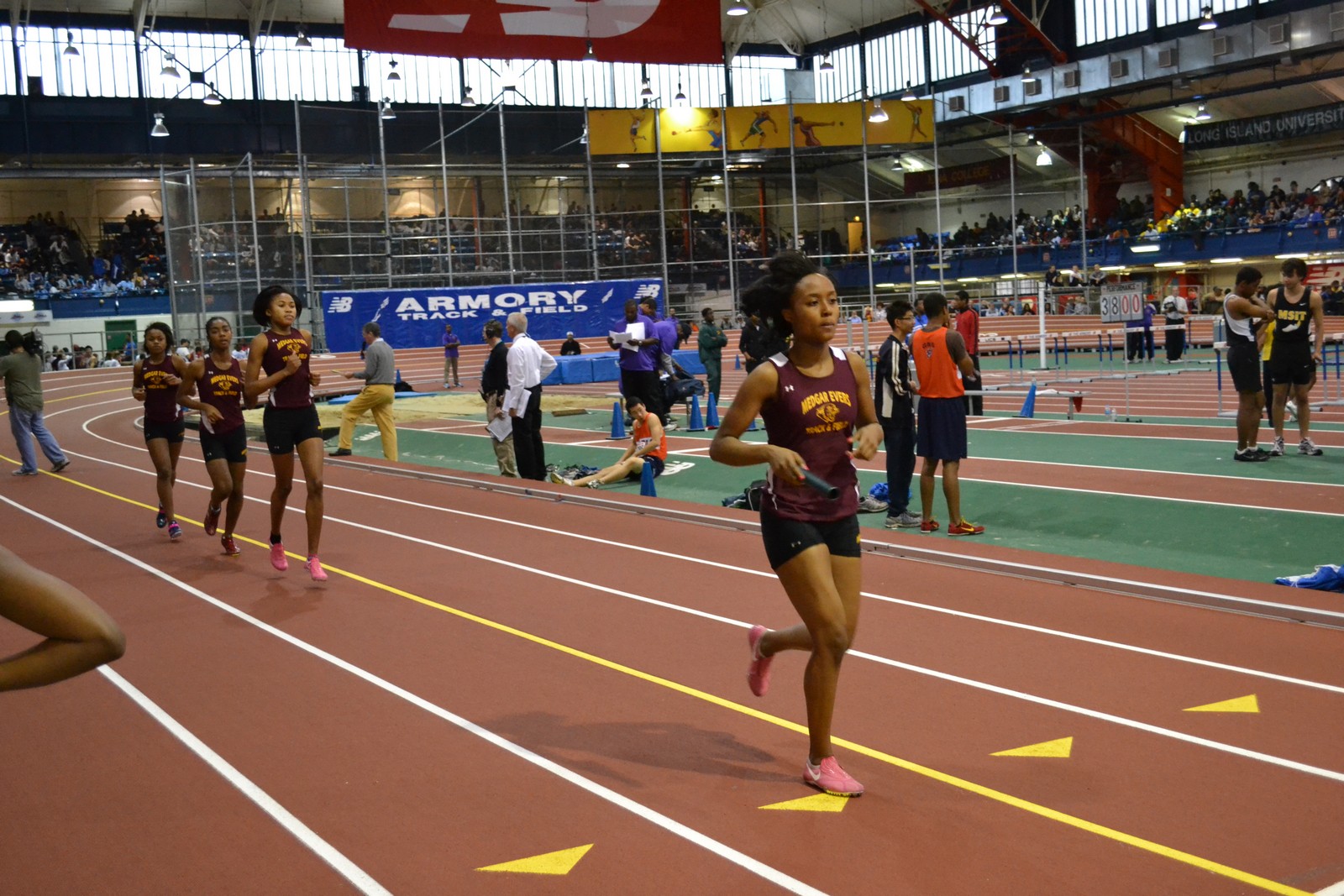 The night concluded with a nation-leading 4x400 meter relay time from Swenson, PA.  The time of 3:55.8 is very fast for the early season. 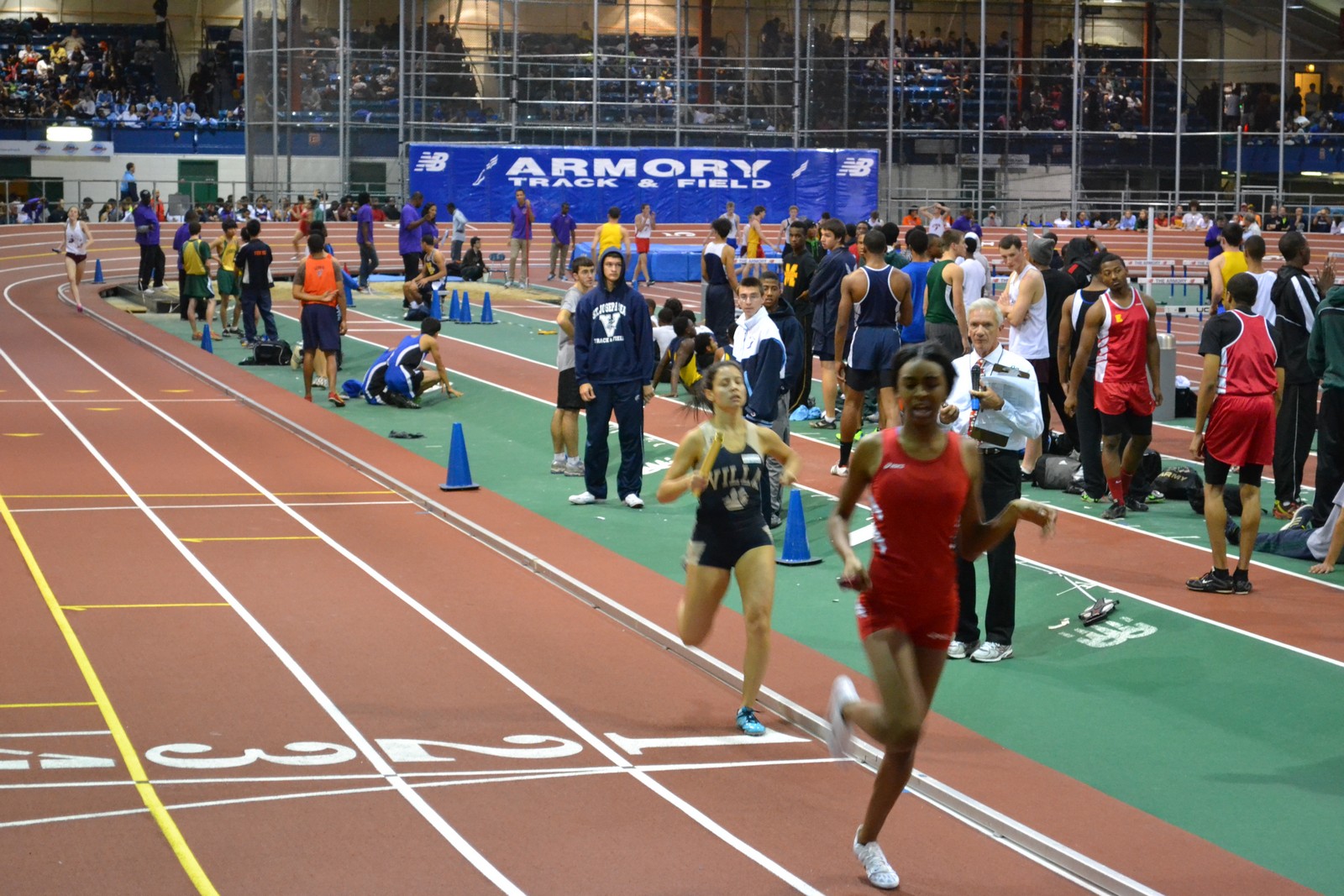 The boys didn't waste time with meet record either.  The sophmore Sprint Medley Relay was taken down by the relay from St. Benedict's.  The meet record was actually broken by more than 3 times before the new record settled on 3:50.3, having been run by the St. Benedict's team of Benjamin Guerin, Tyler Cooper, Aziz Smith and Naija Omari.  However, the big story of the night was to be teammate Edward Cheserek's first race of the season.  Entered in the 1-mile run, all eyes were on the clock as he ran.  Dreams of a sub 4:00 mile quickly vanished, as Cheserek was unusually hanging out near the rear of the pack.  The pack confined Cheserek to a slow 66-second opening quarter, before he broke loose and took off.  Cheserek's final time across the line, good enough for the Millrose auto-qualifier, was a strong 4:09.9 .  The time stands at #5 All-Time for the Armory. 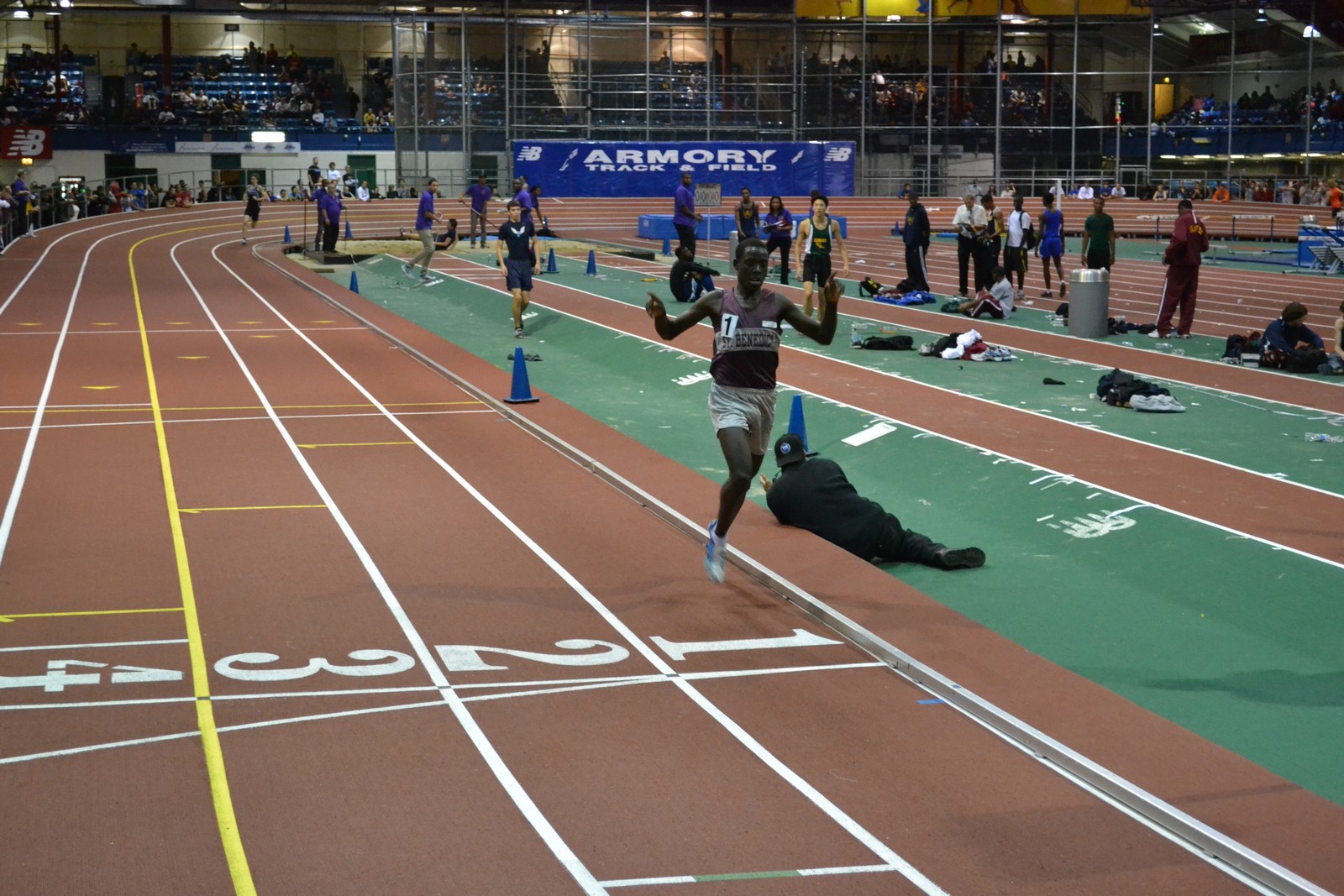 Directly after, Eric Futch of Penn Wood PA, would take the 300 meter dash in a fast time of 33.56.  Running in a cast on his left arm, his time is good enough for 10th All-Time in the US. 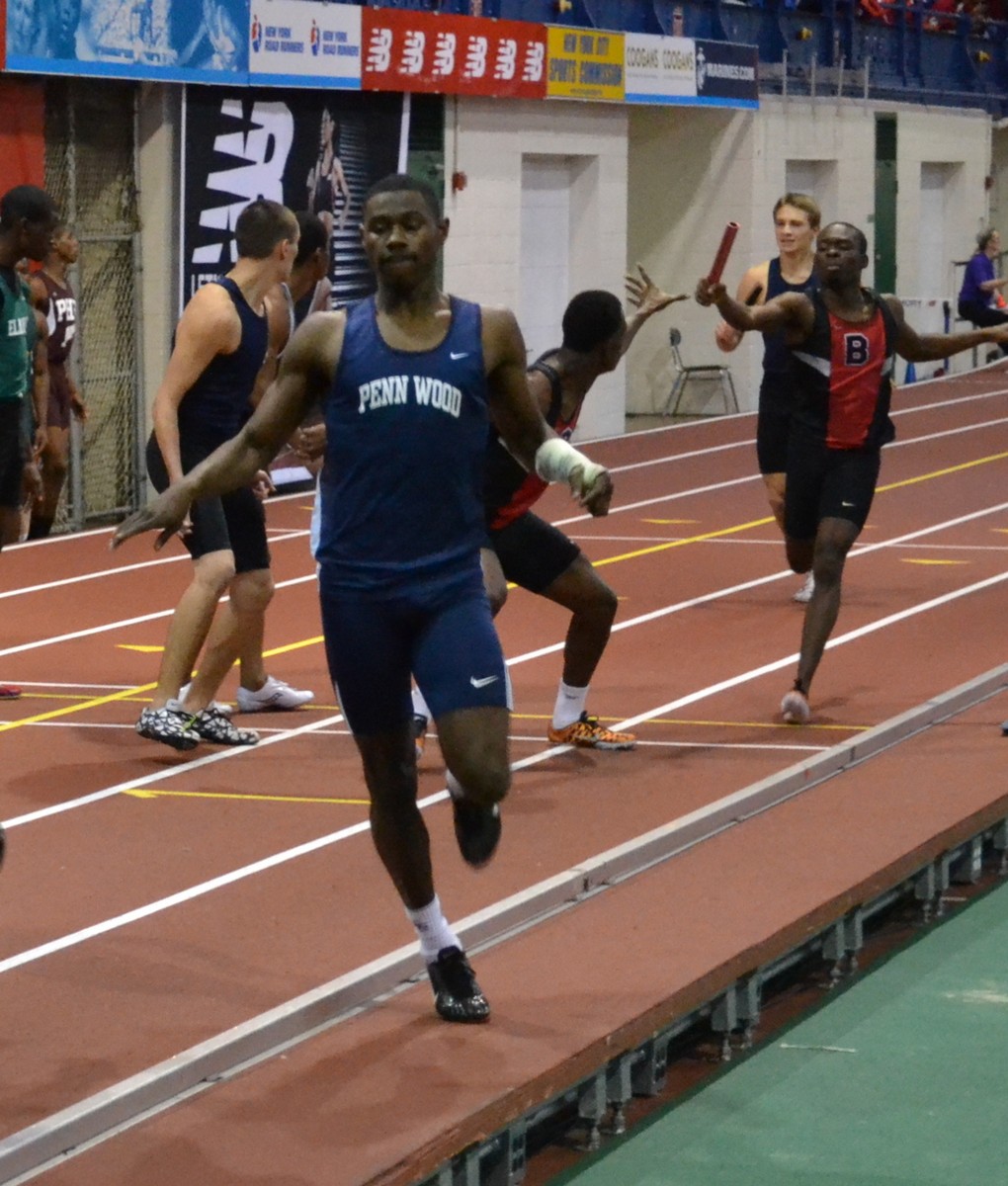 Overall, it has been a good weekend for the Armory.