Now in his 38th season as a cross country and track and field coach, Pawling High School’s Jack Power believes that coaching wisdom comes with time. A Pennsylvania native, Power spent 25 years as a coach at North East High School in Erie County, where he won three boys and three girls' state cross-country titles. Power came to Pawling in 1998, reviving its cross-country program after a 20-year absence. Pawling has been a runner-up twice in cross-country at the state level. The 2010 team finished third at the 2010 NYSPHSAA Cross Country Championships in Class C, which took place at Pawling’s Lakeside Park course.

How is the team looking?

I think we’re going to be surprisingly good. Our top runner is Matt Jorgensen. He’s improved a lot already. Our top three are pretty strong. Taylor and Colin Souter are both 4:30 milers. They’re much improved.

What is your cross-country training philosophy?

I’ve changed over the years. I started as a young coach. I did a lot of intervals. I moved to more of a combination of Marty Liquori and Jack Daniels. We focus on a lot of mileage. Our top boys are doing 70 miles a week.

What led you to move away from interval training?

The first ten years I coached, we’d be doing quarters and 200’s. What I found out was, we’re very good early, and in the end it’d flatten out. Or going downhill by the end of the year.

I think the kids, they’re stronger, they’ll come out of the gate (well) doing very few interval workouts. They’ll come out at about 90 percent of their ability just on mileage alone.

You’re running a limited amount of cross-country meets. What led you to that decision?

You only have so many good runs in you. If you look at collegiate runners, a top collegiate runner may only run four races. I remember hearing Sebastian Coe a long time ago say, ‘Americans race too much’. 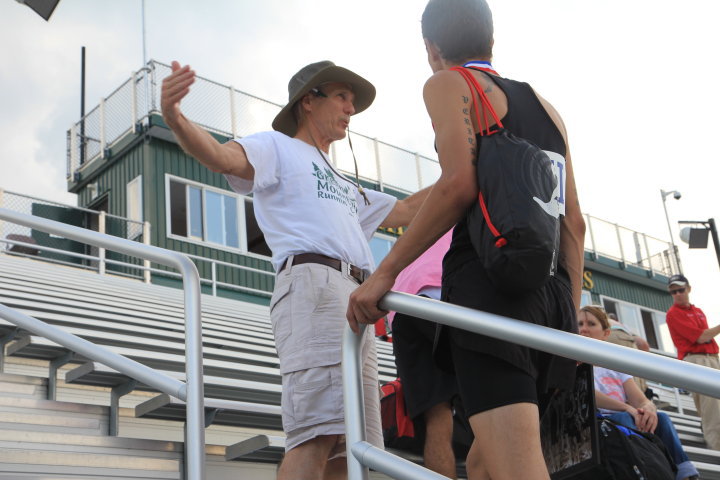 Our big meet is the McQuaid meet the first Saturday of October. We’re running in the seeded race against the best small schools in the state. That will be the teller.

How have you changed your approach to coaching over the years?

Today you definitely have to be more flexible. Parents are different. Kids have so many irons in the fire. But at their core, at their heart, they’re the same.

What does it take to be a good coach?

I firmly believe that to be a great coach you had to have been a runner. You had to have been a good runner and probably have a lot of experience. … I think being a Division I runner (at the University of Cincinnati) helped, even though I wasn’t a really strong runner.  Knowing what it takes (as far as) training and learning.

How would you compare the quality of running in New York and Pennsylvania?

I’m actually revamping it and taking it back to the first course, where three-quarters of a mile are in the park area where spectators can see you, and adding another half-mile with trails and woods. I think the changes will be good for the runner.

One significant change is that the kids will hit the hill at the one-mile mark instead of the mile-and-a-half mark. So you’re a little bit fresher. The kids have told me that they like the (new) course.