HUNTINGTON – North Shore set a meet record in the girls 4x1,600 relay at the St. Anthony’s Invitational Friday. When they finished, they were disappointed and their coach was fuming.


“It was not an indication of where we are right now and where we should be,” coach Neal Levy said.

(4:52.0).  Osman said her team had a chance to make a statement in a rare opportunity and missed it. The team posted a spectacular second-place finish in the distance medley at Penn Relays last week. She said her team had an emotional letdown.


“I think after Penn, it was just so big and we were so hyped for it, “ Osman said. “It was like we came to a smaller meet and didn’t really get up for it. I know that, as a team, we’re capable of running much better.”


The way Nerud and Nadel have been running this year – Nerud split 3:31 on her 1,200 leg at Penn, the fastest in Penn Relays history – North Shore had a chance to put down an impressive, if not historic, performance. But even with a meet record, the team expected more.


“I always tell the kids that they don’t always have to have great days but you can’t have bad days,” Levy said. “They have to know that if they want to be an elite team that if they have the opportunity to perform, they can’t miss those chances.”


Glen Forsythe didn’t miss his chance. The Uniondale senior turned in the best performance by jumper in the state this season. He won the long jump in a state-leading 23 feet, 11 inches.


It wasn’t just that Forsythe, who has yet to decide on a college, posted a big-time jump on his final attempt. He put up marks of 23-2 and 23-5 in the finals.


Forsythe just missed his number but he certainly elevated himself as the jumper to beat in New York, after an 11th-place finish at Penn Relays were he jumped a mere 22-2.5. It’s performances like that, and his ninth-place finish at the indoor state meet, that Forsythe is trying to put behind him.


“I just wanted to come out and prove to myself that I could do it,” Forsythe said. 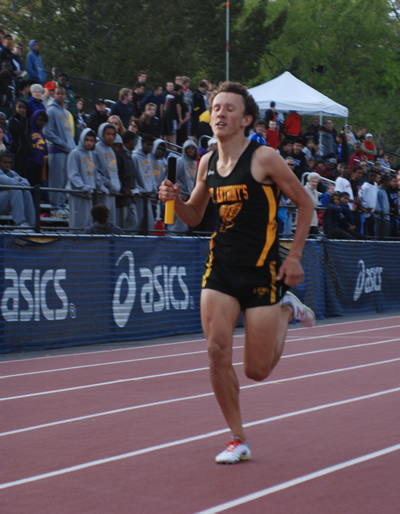 St. Anthony’s won the boys 4x1,600 relay in 18:02.17. The Friars were in fourth when junior Thomas Diliberto took over on the anchor leg. Port Jefferson had built a lead that was dwindling and Diliberto followed Bayport-Blueport’s anchor in pursuit. St. Anthony’s anchor twice tried to move to the front but BBP’s anchor thwarted it with hard surges each time.


Dilberto backed off but with 300 left blitzed the back straightaway before anyone could counter. He anchored in 4:22.0.


Bay Shore swept the 400 hurdles and both the boys and girls winner made a case to be considered the best in the state. First Kadesh Roberts won the boys race in 54.29, the second-fastest time in the state. He held off Joseph Payton of Longwood, the state leader, who finished second in 54.49.


Roberts suffered a calf injury that forced him to miss the entire indoor season but he’s proven his worth early by setting a personal best in only his second race back.


“This gives me a lot of motivation for the rest of the season,” Roberts said.


Jessica Gelibert ran the state-leading time in the girls 400 hurdles in 61.04. Like in the boys’ race, she slipped by Garden City’s Michelle Rotondo on the home stretch. Rotondo placed second in 61.23.


Gelibert scored a three-second personal best while Rotondo showed she’s rebounded from a bout with mononucleosis that put her on the behind for the winter season. Gilibert said her patience served as her biggest asset Friday, especially she saw Rotondo leading early.


“I’m such a competitive person that I usually want to pass anyone in front of me as fast as possible,” Gelibert said. “But this time I didn’t want to panic. I wanted to take my time and really push it in the last 150.”


The junior said she was happy with the time but the win was the most important.


“I just like medals,” she said. “I have a wall with medals all over it. My goal is to cover the wall. The times matter, just as long as it’s better than everyone else’s."